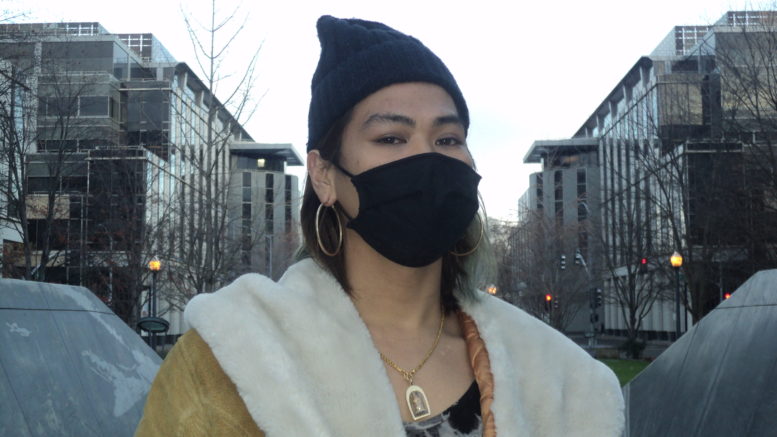 Thongxy Phansopha is still experiencing residual symptoms from injuries suffered that night, seven months after being struck in the head by a tear gas canister and six rubber bullets allegedly fired by Sacramento police at a May BLM protest. They still need medical treatment, including counseling, to work through what they experienced. Photo by Edgar Sanchez

“I am so grateful” not to be dead, the 32-year-old queer nonbinary Laotian American said in a recent interview.

Then, in a pained voice, Phansopha described what happened seven months ago.

On the night of May 30—soon after the US recorded its 100,000th COVID-19 death—Phansopha joined an anti-police-brutality rally in Sacramento, bringing water bottles and granola bars to hand out to fellow protesters.

Phansopha—who uses the pronouns they/them—was cautious while distributing the items, courtesy of River City Food Bank and Sacramento Soup, for which they volunteered.

“I wore a mask and plastic gloves,” they recalled. “I was social distancing to the best of my ability. I had simple, fast interactions. I kept moving around, not staying in one spot.”

Those precautions kept Phansopha safe from the disease, but not from law enforcement.

Eventually, a line of Sacramento police stopped the demonstrators at 21st and J streets. According to published news reports, officers believed rocks and other objects were being thrown at them.

“I have no idea how many people were out there,” Phansopha said.

Phansopha was struck by six rubber bullets, including three on the left side of their face. A tear gas canister hit their forehead, drenching them in blood.

“They (the police) almost killed me,” said Phansopha, who was rushed to a hospital by friends. Phansopha was soon transferred to UC Davis Medical Center where they were hospitalized for multiple surgeries and recovery time.

Born in Fresno to Laotian refugees, Phansopha grew up in Section 8 Housing, witnessing “how violent the police can be to Black and brown people.”

This year, Phansopha watched footage of George Floyd’s May 25 murder by Minneapolis police—an execution that turned Phansopha into a stronger supporter of Black Lives Matter.

Phansopha attended anti-police-brutality rallies as a participant in peaceful protests and to deliver “mutual aid” to demonstrators.

Phansopha, a professional cook, is a member of Decarcerate Sacramento, a coalition supported by The California Endowment.

Phansopha will spend Christmas with family, grateful that they, too, survived 2020.

For more about The California Endowment, visit https://www.calendow.org/places/sacramento/

The police eyes in the skies