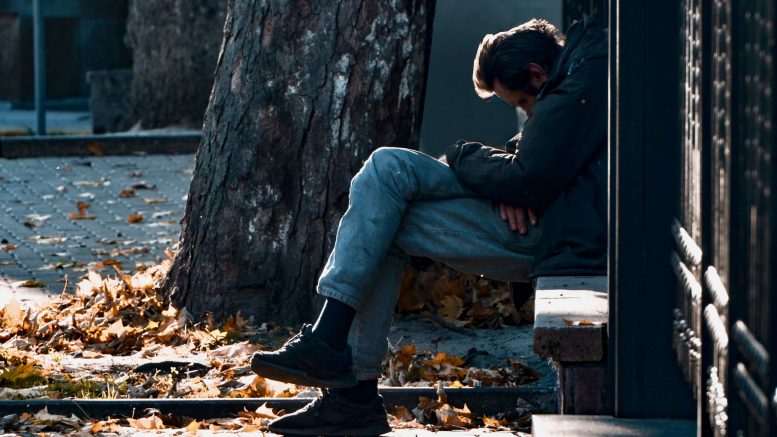 Steinberg announces a ‘right-to-housing’ initiative, with mandatory shelter requirements, but advocates fear the city is willfully ignoring an immediate threat of displacement

If Mayor Darrell Steinberg was looking to make news Tuesday night by unveiling a sweeping new proposal on homelessness, his words had that effect, generating an array of headlines about Sacramento possibly enacting a landmark ‘right-to-housing’ ordinance. But while Steinberg’s idea found a degree of support with elected officials, many who work around unhoused people expressed misgivings about its nature – while the city’s tenant union stressed councilmembers should be focused on a dire situation that they’re fully aware of, one that could lead to even more people living on the streets.

Housing and homeless advocates had to sit through nearly two hours of mundane city business Tuesday evening before Steinberg turned the virtual crowd’s attention to the main event: He unveiled his much-wondered about proposal, which would establish that all people in the City of Sacramento have a legal right to “housing,” and, accordingly, must live indoors. The mayor acknowledged that not only would this mean that the city has to provide a roof over the head of anyone who doesn’t have one, but that all residents on the streets would have an obligation to come indoors if they’re offered “safe and dignified” housing options.

While the ordinance might initially strike some as unconstitutional, one interpretation of the famous Martin v. Boise decision by the U.S. Court of Appeals for the Ninth Circuit in 2018 – the key legal ruling on one’s right to camp in urban areas – would suggest that such a policy could stand up to litigation.

“Our actions and our policies also send strong signals, to both the public and the private sector; and what is the current signal that we are sending?” Steinberg asked rhetorically during the meeting. “When I speak about systemic failures, I’m not talking about individuals, because we’re all part of this, including me. I’m talking about the systems, and the laws, and what inhibits progress.”

A number of councilmembers, including Jeff Harris and Katie Valenzuela, expressed immediate concerns about whether the city would realistically have the resources to provide “safe and dignified” housing options to potentially 11,000 people living in its alleys and on its levees. But other councilmembers indicated that the scope of homelessness in Sacramento may have reached paralyzing levels – and be something that’s souring residents on staking their futures on the city.

“It’s not acceptable for anyone to live on the streets – it’s not conducive to living, not only for those who are unhoused on the streets, but it’s not good for those who live around there, or, frankly, anyone in the city,” Vice Mayor Jay Schenirer said. “I have more and more people telling me, ‘I’m going to move. I don’t want to see this anymore.’ We’re going to lose folks which we can’t afford to lose.”

Recently elected District 2 councilman Sean Loloee added that he thought the amount of tragedy and victimization associated with homeless encampments – or his understanding of that situation – could no longer be tolerated.

He added, “I know there’s a lot of emotions involved in this topic, but I think we need to set the emotions aside and get to what is realistic … Mr. Mayor, if you’re saying we need to bring everyone into a safe environment, I think we have to let the public know, if we don’t do this, these are individuals who are getting robbed, getting raped, getting killed, on a daily basis. And it’s really sad – and we have children that are in these encampments.”

But some who have worked in supportive roles for those on the streets pushed back on the narrative. Niki Jones, with the Sacramento Homeless Organizing Committee, called Steinberg’s proposal a disingenuous façade.

“While I appreciate the flowery comments, this is not a right-to-housing,” Jones told the council. “There have been movements for decades that have fought for an actual, real right-to-housing … This is just miserably not it … Tents on the cement is not housing. A congregate shelter is not housing. You’re using the language to portray a mirage that’s not there.”

Jones added, “People have talked about the mistrust you’ve built for years in this city by criminalizing and harassing people who are pushed to live outside. This is a coercive strategy – there’s coercion on so many fronts.”

“You can’t force someone indoors, you have to get their trust,” Copeland emphasized. “We need affordable housing now, and this city has failed us for years.”

Then, the question of affordable housing – and its nexus with the city’s growing homeless numbers over the last six years – briefly took center stage: Erica Jaramillo, an organizer with the Sacramento Tenants Union, pointed out that earlier in the day councilmembers who sit on the Law and Legislative Committee received notice that the long-feared, post-COVID, eviction avalanche appeared to be taking place.

“Today there was a report given out at the Law & Leg meeting, and the housing authority meeting, that there are already 3,000 residents that have received ‘some type of notice,’” Jaramillo pointed out. “These notices are not, ‘I hope you’re doing good during the pandemic’ notices. No, these are notices that prep for the beginning of evictions. We need more data on that. We need housing.”

Jaramillo ended her remarks by referencing a monumental vote that councilmembers Harris, Schenirer, Angelique Ashby, Eric Guerra and Rick Jennings all took in September of 2015, when they decided to eliminate the city’s requirement that developers build a percentage of low-income units into each of their projects. That former policy, known as inclusionary housing, was replaced by a low, per-square-foot fee that developers now pay into the city’s housing trust fund, which has since produced only a pittance of units that working people can afford to live in.

Councilmembers Valenzuela and Mai Vang have been trying to reverse this decision. Unlike Valenzuela and Vang, the councilmembers who took that vote in 2015 have all accepted tens of thousands of dollars from developers in campaign contributions. On the eve of potentially 3,000 evictions taking place in the city, Jaramillo made sure to remind everyone listening about that.

“We need our inclusionary housing back, you just don’t have the will to do it,” she stressed. Then, speaking directly to some of the council, Jaramillo added, “Housing developers own Sacramento – they own you all. They own you, Eric [Guerra]. They own you, Darrel [Steinberg]. They own you guys … This is not a solution. There’s no oversight of our housing programs in Sacramento.”

2 Comments on "Is the Sacramento mayor’s controversial new proposal distracting from a mass eviction event happening in real time?"