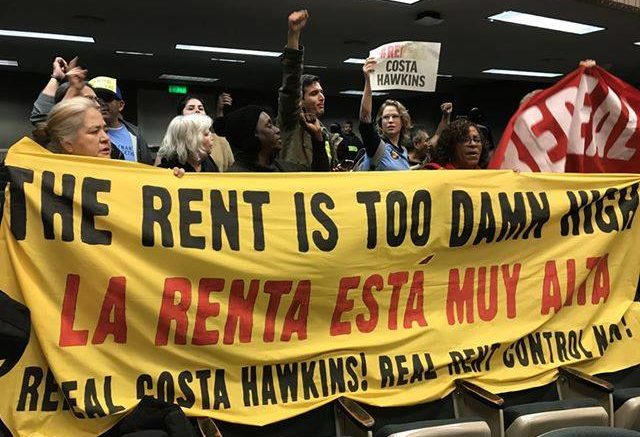 The Sacramento Tenants Union did not support a compromise city ordinance on rent control. A stronger version is on the Nov. 3 ballot.

After nearly three years of Sacramento housing advocates imploring leaders to pass rent control and other tenant protections, a grand bargain of sorts was announced Aug. 8 and is set to go before the City Council on Tuesday.

Some advocates call the proposed ordinance a significant step in relieving the pain around Sacramento’s housing crisis. Others believe it doesn’t go nearly far enough to prevent widespread displacement and rising homeless numbers. What was also unclear as of press time is whether Sacramento leaders enacting the bargain will prevent a battle at the ballot box for more extensive rent control in 2020.

Called the Tenant Protection and Relief Act, the proposal before the council is being described as a merging of an ordinance drafted by council members Steven Hansen, Eric Guerra and Rick Jennings and an earlier compromise effort that Mayor Darrell Steinberg tried to negotiate between tenant advocates and landlord groups.

If passed, the measure would limit annual rent hikes to between 7% and 9%, depending on the consumer price index. It would also have a hard rent cap of 10% under any circumstances. In 2017, the median rent in Sacramento increased by 8.2%.

For renters who have more than 12 months of tenancy, it would generally bar no-cause evictions. Finally, the measure would include a rental registry that would help city leaders and housing advocates better track eviction issues, as well as whether or not the tenant protections prevent displacement.

Because of limits under state law, the proposed ordinance would only apply to rental units built before Feb. 1, 1995, and it would not cover single-family homes.

The Tenant Protection and Relief Act, if enacted, would be evaluated annually and sunset after 5 years. The measure was engineered after Housing4Sacramento and other tenant groups collected enough signatures to put a more stringent rent control and tenant protection code in front of city voters next year. That charter amendment would cap annual rent increases directly at the consumer price index and establish an elected board to mediate tenant issues.

Housing4Sacramento has endorsed the new compromise, calling it “an important step forward.”

“We’ve spent more than 30 years advocating for everyone in Sacramento to have safe and affordable housing, and these tenant protections will bring some relief,” said Veronica Beaty, the alliance’s policy director.

But not all tenant advocacy groups are celebrating. The Sacramento Tenants Union is expressing concern that the proposed rent cap is significantly too high, that city officials have too much financial influence from the rental lobby to fairly mediate tenant issues and that there are loopholes landlords can exploit.

“There’s also the fact that this was negotiated behind closed doors and that the city is trying to circumvent the democratic process,” said Sacramento Tenants Union Member Kitty Bolte. “Over 44,000 people signed a petition for the charter amendment so there would be real rent control and protections, and they deserve to be heard.”

Be the first to comment on "Tenant turning point?"