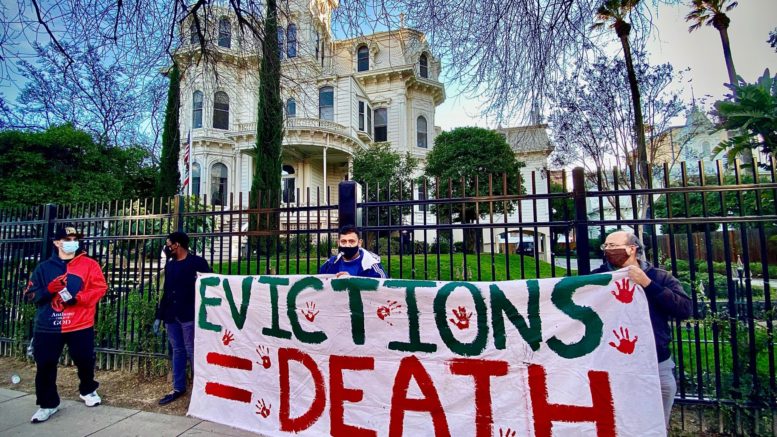 If Gov. Gavin Newsom wasn’t already taking fire from enough directions, housing advocates joined the criticism this week when he announced details of the next phase of the state’s pandemic-related tenant projections—a proposal approved by the state Legislature on Thursday and that Newsom will sign into law.

Community organizers and housing specialists say Newsom’s team ditched a proposal they were negotiating with landlords and replaced it with an emergency bill that has dangerous loopholes. They’re now warning those oversights will likely cause many renters to spiral into homelessness or take desperate work-related risks, further spreading COVID-19.

To drive home the point, advocates led a symbolic funeral procession from the state Capitol to the Governor’s Mansion on Monday, just hours after Newsom’s press conference, hauling a makeshift coffin as they went.

California’s eviction moratorium was set to expire at the end of this month. It required tenants to come up with 25% of the rent they owe from Sept. 1, 2020, through Jan. 31 and to pay back all missed rent by March 1.

Housing advocates spent November and much of December working with Assemblyman David Chui on Assembly Bill 15 and negotiating with the California Apartment Association to come up with a plan to extend the moratorium to the end of 2021 and offer some form of rent forgiveness.

Then, toward the end of December, as the governor found himself in the headlines for one controversy after another on the pandemic, Newsom’s team suddenly shifted course.

“Gov. Newsom’s office decided to blow up the negotiations we’d been working on,” said Shanti Singh, communications and legislative director for Tenants Together. “After the holiday, Newsom unilaterally decided to more in a direction where we weren’t at the table.”

That direction was Senate Bill 91, introduced by the Committee on Budget and Fiscal Review. It extends the eviction moratorium only until July 1. It also channels $2.6 billion in federal aid into a program that allows landlords to get reimbursed for 80% of what a tenant owes them if the landlord agrees to forgive the remaining 20%. Tenants cannot apply themselves, only their landlords.

“If landlords choose not to participate—no one has to—there’s no direct federal benefit that goes to that landlord,” Newsom said at his press conference.

Still, Newsom expressed confidence that enough landlords would opt in to stop an eviction catastrophe across the state.

“Those tenants will be able to get their lives a little more stable,” he said.

But Newsom had scarcely left the microphone when housing advocates argued that many tenants would be anything but stable under this deal. They pointed out that there’s no rule barring landlords who take the federal relief from later harassing or evicting their tenants.

“Landlords that are receiving a government bailout can’t be allowed to turn around and evict renters,” said Francisco Dueñas, executive director of Housing Now!. “You wouldn’t bail out an airline and then let them turn around and fire all their flight attendants.”

Housing Now! Tenants Together, the Eviction Defense Network and the Leadership Counsel for Justice and Accountability also criticized SB 91 for not ensuring that small, mom-and-pop landlords get priority for federal dollars over large companies such as Blackstone, the largest corporate landlord in Sacramento County.

Yet the biggest concern for advocates is that tenants, themselves, can’t  apply for the new relief program. For those who rent from landlords who choose not to apply, there are other assistance programs available, but they only amount to 25% of their rental debt being paid.

“There’s no rent cancellation, so that means if your landlord does apply, then you’re probably in a good spot. But if they don’t, then that tenant is still going to be in a deep hole,” Singh said. “If your landlord doesn’t accept the money, you could fall through the cracks in a lot of different ways.”

And that, advocates say, can have broader public health consequences. Illustrating that reality at the Monday demonstration was Anthony Ydrogo, a Sacramento tenant and father of three young children. Ydrogo says that after he lost his income due to the pandemic, he was hit with multiple eviction notices and other forms of harassment from his landlord. Worried about becoming homeless, he began working at a gas station in his neighborhood to catch up on rent. He says within weeks of making that decision, he contracted COVID-19 and then spread it to his daughter.

“If everyone gets evicted, I feel there’s going to be more COVID cases,” Ydrogo told the crowd.

The demonstration represented a backlash to yet another element of the Newsom administration’s pandemic game plan.

There are still thousands of Californians out of work who haven’t received unemployment benefits, while the state did pay out millions—possibly billions—in benefits to convicted criminals sitting behind bars. Several state business associations are suing Newsom, claiming there was no scientific data to justify closing outdoor dining, gyms and hair and nail salons during the stay-at-home orders that weren’t lifted for most regions until this week. And between mid-December and mid-January, California had one of the slowest COVID-19 vaccine roll-outs in the entire nation. On Wednesday, the Newsom administration announced that Blue Shield, the nonprofit health insurance giant, will take over the statewide vaccine distribution.

Also this week, organizers of the recall effort against Newsom announced they have gathered 1.2 million signatures. They need a total of 1.5 million by March 17 to force a special election as soon as this fall.

For housing advocates, the public ire aimed at Newsom at Monday’s demonstration was a self-inflicted wound.

“The governor didn’t listen us, but he didn’t seem to listen to the landlords, either, so everyone with the most practical knowledge of conditions on the ground got ignored,” Singh said. “As usual, the burden is going to fall on us to try to help all the people who are left behind.”