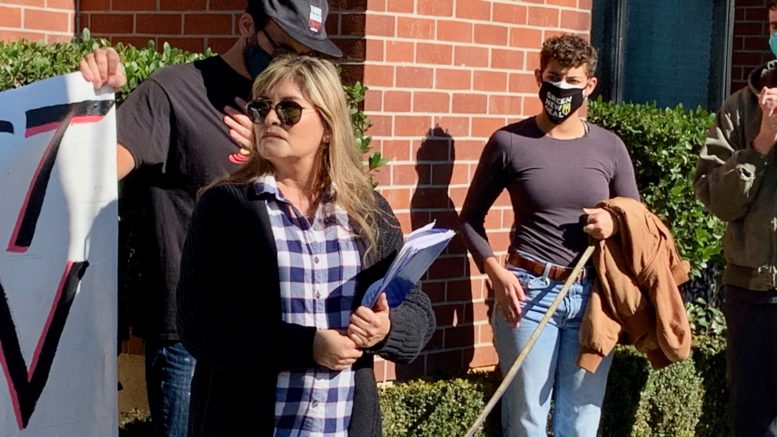 Tanya Vera stands in front of St. Anton Capital’s headquarters on I Street in downtown Sacramento after its managers evicted her and her daughters. (Photo by Scott Thomas Anderson)

St. Anton Capital is on track to get subsidies for its Natomas apartments, but advocates say it’s using an eviction moratorium loophole to put a family on the street

Vera is a 49-year-old mother of two who’s been putting herself through California State University East Bay, studying hospitality management. She’s also disabled and currently scheduled for a major surgery. One of her daughters is recovering from a brain injury. Vera and her kids were living at the Bidwell Pointe apartments in Folsom, in a unit that’s part of the federal Low-Income Housing Tax Credit program, which subsidizes the construction of affordable housing for low- and moderate-income tenants.

Vera, who’s set to graduate this summer, is arguably an ideal candidate for the program—a tenant who’s navigating California’s crippling housing crisis while steering toward a better-paying career.

But now, Vera needs more help than ever.

Despite Gov. Gavin Newsom’s claims that California has an eviction moratorium in place until July due to COVID-19, Vera’s landlord, St. Anton Capital, used one of the many loopholes tenant groups have been warning about to evict her family. The reason: an income reporting error related to her daughter’s job training program that’s buried within the 70 pages of documents Vera had to fill out to qualify for the tax credit program.

Vera says she’s tried repeatedly to correct the confusion and prove that she qualifies—her daughter’s income was temporary—but St. Anton Capital’s management in Folsom refused to rescind the eviction.

“Even though we were renting from a federal government program, which should be protected by federal law and executive orders, St. Anton disregarded that and violated all of the rules,” Vera said. “They didn’t give me a chance to cure the violation, as they call it. They tagged me as a criminal…”

“If there was in fact a mistake, why didn’t they give me a chance to bring down my papers and show them proof?” she added. “They didn’t. They just automatically gave me a 60-day notice to kick me out to the street.”

Vera said that a representative from the U.S. Department of Housing and Urban Development told her that income reporting errors are among the most common hiccups in LIHTC applications and that they’re often easily fixed by property management. That hasn’t been the case for Vera.

After her story went public, a Folsom-based manager for St. Anton Capital told reporters that Vera, whose family has been living at Bidwell Pointe for more than a year, doesn’t qualify for LIHTC. The manager made the assertion despite the fact that Vera and both her daughters are currently unemployed.

On Saturday, the Sacramento Eviction Defense Network led a protest in front of St. Anton’s downtown Sacramento headquarters, where Vera and other struggling tenants shared their stories.

Elliot Stevenson, a member of the Sacramento Tenants Union, said that when his group contacted City Hall with concerns about Vera, they were told by one official that St. Anton has an excellent reputation in Sacramento. St. Anton is about to receive $30 million in city and county tax-exempt mortgage revenue bonds for its next housing project in Natomas.

On Sept. 22, the Sacramento Housing and Redevelopment Agency approved awarding St. Anton the subsidies for its Northlake Senior Apartments, a 191-unit complex proposed for the Greenbriar subdivision. According to SHRA documents, these apartments will help the subdivision meets its affordable housing requirements. The apartments are anticipated to be funded long-term by LIHTC and managed directly by St. Anton.

After hearing Vera’s story, that has local housing advocates concerned.

“St. Anton Capital is a large landlord and community developer here in the Sacramento region, and they’ve got lots of cash, they’ve got lots of property units, and inevitably some of those units are vacant. However, right now they are saying this one specific tenant has to leave because of a paperwork error,” Stevenson said. “It’s absurd to make a family—a single-mother with two children who’s trying to put herself through school—leave into the streets in the midst of a pandemic over a paperwork error … St. Anton can take responsibility and do the right thing.”

“There will be a full presentation and hearing then,” Jones said. “Public comment will be part of it.”

Stevenson said he hopes tenants and concerned citizens will make their voices heard about rewarding St. Anton with a subsidy. He also hopes people will see in Vera’s story the truth of the eviction moratorium’s weaknesses.

“More broadly, California and Sacramento need stronger protections to close the loopholes that are impacting tenants who are falling through the cracks right now,” Stevenson said. “It’s great for headlines for politicians like Gavin Newsom to say, ‘We have the strongest protections in the country.’ Well, that doesn’t say very much, right? Compared to what?”