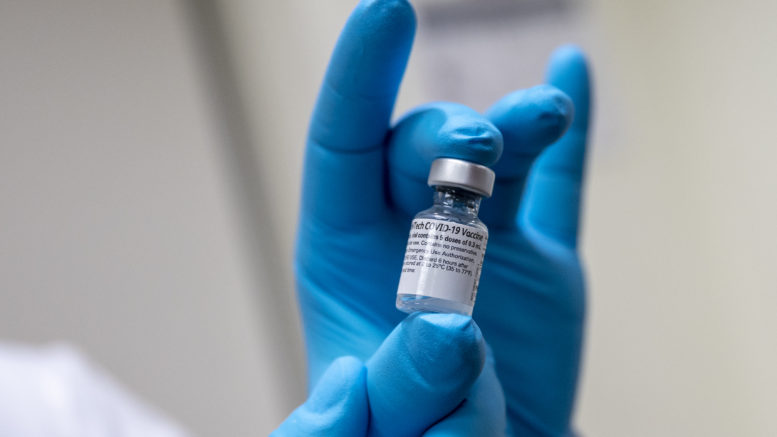 The COVID-19 vaccine from Pfizer. (Photo from Wiki Commons)

We’re in a race between more contagious COVID-19 variants and getting the vaccine to enough people to stop another surge.

And the contest comes at a crucial time for Sacramento County to have any hope of rolling back restrictions further anytime soon.

Sacramento County, like most of California, is still ramping up its vaccination campaign. It just moved into the second phase, which includes those 65 and older, plus law enforcement and emergency services personnel. Starting Feb. 16, vaccinations will extend to child care workers and K-12 teachers, which could be essential to reopen more schools, though full vaccination isn’t required.

But Olivia Kasirye, the county’s health director, said some people are having trouble getting vaccination appointments because the number of doses is limited. At the same time, some younger adults are getting shots ahead of time because they happen to be available when there are leftover doses that would otherwise be unused, she said.

County public health officials are also telling supervisors that it will take “significant time” to vaccinate 200,000 seniors. The county has been allocated about 150,000 doses so far, according to the report to supervisors, and as of Feb. 5, about 114,000 had been administered, including 81,000 to county residents and the remainder to people who work in Sacramento County but live elsewhere. About 15,800 Sacramento County residents had received their second doses. Those numbers don’t include shots allocated by the state directly to pharmacies for nursing homes.

Public health officials also said that vaccinations so far are not reaching as diverse a population as they need to be, partly because the first occupations receiving shots are disproportionately white. Several supervisors called for more effort to improve the numbers. La Familia hosted a pop-up vaccination clinic on Feb. 13 aimed at Latinos.

UPDATE: In response, a new group of African-American community leaders called on Sacramento County and health care providers to do more to provide equitable access.

“A fair and equitable distribution of the COVID-19 vaccine by regional health care providers and county health officials is just the first step in rebuilding the damage the pandemic has had on the Black community,” said Sacramentans Advocating for Vaccine Equity.

In the first phase, shots were limited to health care workers and nursing home staff and residents. Also, officials said that most staff—but not inmates—have received their shots at the county’s jails, where there were outbreaks since late December.

While overall cases and hospitalizations are down, variants of the virus from the United Kingdom, Brazil and South Africa are spreading in California. They’re more easily transmitted and it’s possible they could be more resistant to some of the current vaccines. On Feb. 8, Healthy Davis Together and the UC Davis Genome Center said they had identified the first known case of the U.K. variant in the Sacramento region.

The more COVID-19 spreads, the more likely that additional variants of the virus, perhaps homegrown ones, will develop. That makes it more crucial that vaccinations accelerate, according to public health experts.

Gov. Gavin Newsom, who has been criticized for the slow vaccine roll-out, held an event Feb. 8 at Petco Park, the state’s first mass vaccination site, and said another site will open soon in the Central Valley. A day later, the state announced that Levi’s Stadium, home of the NFL San Francisco 49ers, will also be a vaccination site. In addition, the Department of Defense plans to open sites in Oakland and East Los Angeles. The state is starting new vaccine distribution partnerships with Kaiser Permanente and Blue Shield of California. The contract with the latter calls for distributing 3 million vaccine doses a week by March 1.

On Feb. 12, the state announced that it is expanding eligibility for shots to all adults with chronic health conditions. And on Monday, the state launched a new multilingual public service ad campaign featuring real mothers talking about the importance of getting vaccinated.

As of Feb. 18, the state Department of Public Health reported that 8.7 million vaccine doses have been delivered to California and 6.7 million have been administered.

Like almost all of California, except six small counties, Sacramento County is in the state’s most restrictive “purple” tier. To reach the “red” tier, the county must control infections more effectively. But county public health officials are warning that the latest risk is a surge from Super Bowl parties.

The numbers represent the latest improvement in Sacramento County’s coronavirus numbers with daily new cases back down to levels before the winter surge.

To get to the red tier, however, the county must get the new case rate to 7.0 or less and the test positivity rate to 8% or less for two weeks in a row. Also, its test positivity rate cannot be higher in disadvantaged neighborhoods. And officials cautioned that while the numbers are headed in the right direction, they’re still higher than the earlier peak last summer.

It would also let more middle and high schools reopen, once they get public health approval for their COVID-19 safety plans. The new case rate must be reduced to only 25.0 or less for five consecutive days for more K-6 schools to reopen with safety plans. Kasirye told supervisors that several of the safety plans are being reviewed.

The last time Sacramento County was in the red tier was Nov. 13. It was there from late September, but the third surge of COVID-19 forced it into the most restrictive purple tier and then into a regional stay-at-home order on Dec. 10. That order was lifted for Sacramento and surrounding counties on Jan. 12, which allowed restaurants to offer outdoor dining again, barbershops to reopen and retail stores to increase the number of customers indoors.

But in some good news, Hunt said the county will receive about $60 million from the federal COVID-19 relief package approved in December.

Serna said that given the controversy and confusion over relief spending last year, it’s important to make clear to the public that this money can only be used for the public health response.

Be the first to comment on "The vaccination race"