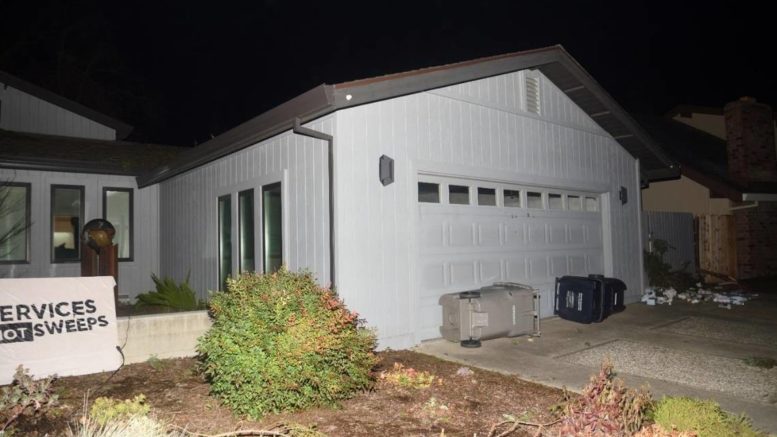 After widespread coverage and condemnation of a violent protest over the weekend at Mayor Darrell Steinberg’s home, Sacramento homeless advocates are seeking to distance themselves, while still standing by their message.

Steinberg has been under fire after the deaths of several homeless people during the severe winter storm on Jan. 26 that forced the City Council to open warming centers and safe places for people living in their cars.

The Sacramento Services Not Sweeps Coalition—which includes the Sacramento Regional Coalition to End Homelessness, Loaves and Fishes and the Poor Peoples Campaign—said it was “horrified” to see its name on a banner draped over Steinberg’s house on Saturday night.

In a statement, the coalition said it condemned the demonstration “not only for its violence and vandalism, but also for hiding behind SNSC—making it appear that we were either behind, or somehow involved, in this action.”

Instead, coalition leaders said they believe in nonviolent protest in the tradition of Martin Luther King Jr. and “good trouble” of the late Congressman John Lewis, such as the candlelight vigil they held at City Hall last Friday night.

Later, Loaves and Fishes issued a separate statement to “utterly” condemn the “violent attack” on Steinberg’s home and to commend the mayor for his leadership on addressing homelessness. “Compassion for the poor should not result in a lack of compassion for other members of our community,” the statement said.

The Sacramento Homeless Union and California Homeless Union—which called on Steinberg to resign and then launched a recall campaign after he refused—also said they didn’t participate in the protest at Steinberg’s home.

In a Facebook post, the groups said while they did not condone any vandalism, “neither will we condemn the protest nor what may have been property damage” in the context of the “wholesale destruction” of personal property during sweeps of homeless encampments.

“A rock thrown in anger against Mayor Steinberg’s door or trash dumped on his front lawn…pales in comparison,” union President Crystal Sanchez said.

According to the Sacramento Police report, more than 80 officers monitored a planned demonstration of about 50 people who marched from Frank Seymour Park in South Sacramento to Steinberg’s house. Most protestors were dressed in all black, wearing helmets and armor, and some carried shields, the report said.

Demonstrators threw rocks, stole security cameras, destroyed lighting fixtures, barricaded the front door and gate with landscaping debris and caused several thousand dollars in damage before officers broke up the protest, the department said. There is an investigation, but there have been no arrests.

Steinberg, himself, partly blamed outsiders for what he called an attack that threatened his family. “They damaged my home and destroyed a cherished homemade piece of art,” he said in a statement. “They threw rocks at my front door. They shouted my kids’ names over and over.”

The mayor is angry and defiant over what happened.

“By attacking my home, you attack my community,” Steinberg said. “I am not backing down. I am more committed than ever to the city I love. I am never giving up on my life’s work to fight for the least among us.”

Heart to Art with Jupiter Lockett