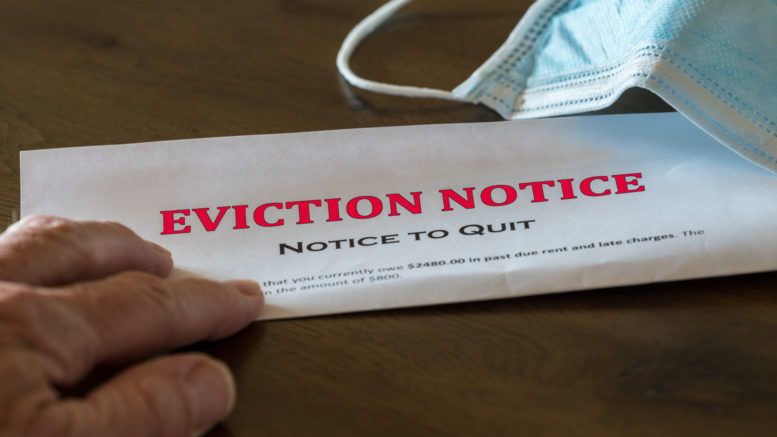 Despite a devastating pandemic that stalled the nation’s economy and a third wave of infections that could do so again, court-ordered evictions are starting to tick back up around Sacramento County.

Banks, landlords and property management companies have filed 496 unlawful detainers in Sacramento Superior Court this year, including 61 between May 26 and Sept. 18, a period covering the court’s reopening to the most recent filings recorded.

Those numbers are still way down from last year, when 3,961 renters faced court-ordered evictions. But that doesn’t mean all is well.

Sacramento Self-Help Housing says average monthly calls to its free renters’ help line rose nearly 10% this year—from an average of 700 monthly calls before the pandemic to approximately 775 calls during the months of March through October. According to the nonprofit organization, which provides counseling and outreach services to homeless individuals and families worried about losing their housing, most of the calls concern evictions, ending tenancy, rent increases and property maintenance.

The uptick in eviction anxiety comes amid stubbornly high unemployment rates and a growing sense the federal government won’t approve another stimulus bill to soften the effects of a winter lockdown, and concerns housing advocates who see limited help on the horizon for struggling renters on the brink of homelessness.

“If Governor Newsom had enacted a comprehensive eviction moratorium in April by the stroke of a pen, as was demanded by tenants, advocates, and leaders all around the state, we would not be staring down an eviction crisis that will last for years,” Tenants Together executive director Lupe Arreola said Aug. 27 in a prepared statement.

Arreola was previewing the state Legislature’s failure to pass Assembly Bill 1436, which would have paused evictions of people unable to pay their full rent for up to a year after California declares an end to the COVID-19 state of emergency, which isn’t likely to happen soon.

In AB 1436’s place, Newsom signed a weaker Assembly bill favored by the California Apartment Association. Rather than a blanket eviction ban, AB 3088 requires renters to prove they can’t pay rent due to significant financial hardship, allows property owners to terminate tenancies of renters who don’t pay without such a declaration and restarted court eviction and foreclosure proceedings on Sept. 1.

The statewide eviction moratorium stays in place until Jan. 31, 2021, but renters must come up with 25% of the rent they owe from Sept. 1 through Jan. 31, and must pay back all missed rent by March 1 to keep their roofs over their heads.

Court-ordered evictions represent only a fraction of overall housing displacements, most of which aren’t sought through or contested in court.

But in the absence of complete eviction totals, they act as an indicator of renter vulnerability. And the most prolific filers this year are cozy with big real estate conglomerates that poured money into defeating rent control ballot initiatives at the city and state level.

ESA Management LLC, the hotel management company that operates Extended Stay America and is based in Charlotte, N.C., filed seven unlawful detainers in Sacramento County this year. ESA Management LLC is itself a subsidiary of The Blackstone Group, a private equity firm that is the second largest property owner in Sacramento County and is responsible for snatching up scores of residential real estate properties around the country.

The dark money these and other entities poured into lobbying lawmakers and defeating Sacramento’s Measure C and California Proposition 21 convinced the electorate to vote against policies it actually supports, say rent control proponents.

“It’s sickening to see,” Jovana Fajardo, director of the Sacramento Alliance of Californians for Community Empowerment, said in a statement on Wednesday. “While homelessness skyrockets and tenants are literally living on the edge of survival during this global pandemic, big real estate continues to flood voters with outright lies so that they can continue to rig the rules to line their own pockets at the expense of the rest of us.”

Partial moratoriums on tenant evictions remain in place at the local level. In the city of Sacramento, renters have until Jan. 28, 2021 to pay back rent and avoid eviction.

Sacramento County spokesperson Kim Nava said the resolution that the Sacramento County Board of Supervisors approved on March 24 will remain in effect through the remainder of the public health emergency.

The resolution applies to all residential tenants who can document their need to delay payment due to the economic or health effects of the COVID-19 crisis.

But once the governor lifts his executive order, renters will have 120 days to pay back what they owe, which means the current trickle up in court evictions could become the tsunami that housing advocates fear.