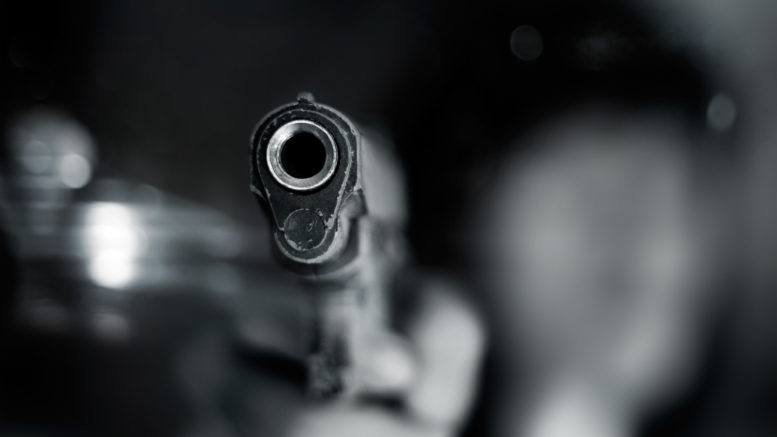 The fact that Shauna Lynlee Giffin shot and killed her son’s father inside their Orangevale home over Thanksgiving weekend isn’t in dispute.

What Giffin was thinking the moment she emptied a handgun into Adam Wayne Hart dominated a Dec. 10 bail hearing in Sacramento County, where the pandemic has lain siege to intimate relationships.

Domestic violence and murder suicides killed at least nine people in Sacramento County this year, including two of the perpetrators. At least five killings were allegedly perpetrated by a spouse or partner armed with a gun or knife in 2020. The latest example occurred the morning of Dec. 21, when authorities say Shakel Samier Beasley fired a single round into his wife’s upper body before calling 911.

The sheriff’s office says four children were inside the couple’s town home when the trigger was pulled and 26-year-old Kymeshia Parker fell.

Other 2020 incidents involved a man who admitted killing his grandfather with a baseball bat in North Highlands and an Elk Grove father who fatally shot his toddler son before turning the gun on himself. The Jan. 26 filicide of 2-year-old Matthew Picazo was one of two crimes to end in a murder-suicide this year. When police arrived to the home on Tamarindo Lane, they found the child’s mother screaming in the street.

While one domestic violence homicide occurred before the first COVID-19 case was detected in Sacramento County, the pandemic and its calamitous ripple effects have caused requests for help to surge at local women’s organizations.

At Giffin’s bail hearing, defense attorney Kelly Babineau portrayed her client as a battered partner fearing for her safety. The prosecution painted a different picture, of a spurned girlfriend whose act of violence makes her a statistical anomaly.

The split-screen accounts unfolded during a highly pressurized time for couples and families—one that advocates say won’t end with a new year.

The Sacramento Police Department recorded a slight increase in domestic disturbance calls during the first few months of the pandemic.

From April through June, police responded to 978 calls regarding a domestic disturbance and made 446 arrests, increases of 2.8% and 8.5% from the same period in 2019, respectively.

The department didn’t provide data covering the past six months, but some local aid groups say their phones are ringing more.

Julie Bornhoeft, chief strategy and sustainability officer for WEAVE Inc., said the crisis intervention nonprofit has charted a notable rise in calls to its legal hotline, a point of contact for victims of domestic violence in Sacramento County.

Bornhoeft said the hotline received 57% more calls between March 13 and Oct. 31 compared to the same period last year, with calls increasing each month since the onset of the pandemic.

“What we hear across all programs and services is that those in domestic violence relationships are experiencing more frequent and severe violence,” Bornhoeft wrote in an email. “The fear of homicide is real and reflective in the increased homicide rates with law enforcement citing domestic violence as a contributor in some of those cases.”

Sacramento County has a higher rate of hospitalization for domestic violence incidents than other counties in California, according to Kaiser Permanente.

Other aid groups have struggled to reach historically marginalized populations during the pandemic.

That may partly explain why requests for restraining orders have actually dipped this year.

“Because of the population that we focus upon, My Sister’s House is especially worried about the calls that we believe will be coming when schedules become more normal,” Valmores wrote in an email.

Some people will never be able to make that call.

On April 6, police discovered a Hmong couple in their late 50s shot dead inside a South Sacramento home. Police ruled the deaths to be the result of a murder-suicide. The coroner’s office listed the couple’s 10 adult children as their next of kin.

Giffin wasn’t in court due to potential exposure to COVID-19 in a holding cell seven days earlier, but the bail hearing provided new details about the night she fatally shot Hart.

According to the prosecution, Hart moved in with Giffin this past May, leading to the end of Giffin’s marriage. Court records show that Giffin’s husband filed for divorce on July 10.

The relationship between Giffin, 35, and Hart, 29, who had a 9-year-old child together, unraveled over Thanksgiving, Deputy District Attorney Allison Dunham told the court.

Dunham said Hart spent four hours with a friend the evening of Thanksgiving Day, beginning an argument that festered through the long weekend. The next morning, Hart left home early for the gym and didn’t return or respond to Giffin’s calls or texts, Dunham said. On Sunday, at Giffin’s invitation, Hart returned home, but left his car keys in the ignition and his cellphone, wallet and a bag of fast food in the car, Dunham said.

The prosecutor said Hart was there to pick up clothes for work.

“Unbeknownst to the victim, the defendant retrieved her 9-millimeter Smith & Wesson handgun from a locked location in the bedroom,” Dunham said, summarizing the investigation by the Sacramento County Sheriff’s Office. “The defendant later claims she retrieves the gun with no plans of using it and before they really even started to argue. The defendant then hid the gun in the waistband of her yoga pants” under a hooded sweatshirt.

Dunham said the pair argued for roughly an hour. At one point, Dunham said, Giffin questioned Hart’s ability to be a father and he allegedly grabbed Giffin by her sweatshirt. Giffin then shoved Hart away and threw a glass candle vase to the floor, breaking it, the prosecutor continued.

The prosecution contends that Giffin made Hart get rid of the gun and knew it was no longer in the house.

“The defendant later claims she thought the victim was getting a gun when he was in the bathroom and she heard the rustling,” Dunham told the court. “So she shot him. She emptied the whole magazine, which holds 10 rounds. The victim was shot nine times.”

A forensic pathologist determined that all nine bullets entered Hart’s body from behind, striking the base of his neck, his upper and lower back, the right forearm and right glute, Dunham told the court. The fatal round entered Hart’s lower back above the belt line and lacerated his aorta, Dunham said.

The sheriff’s office said Giffin called in the shooting herself and that deputies detained her outside her home on Noel Drive.

Hart was previously convicted of state and federal firearm offenses, Giffin’s attorney told the court, meaning Giffin had reason to fear he might have other guns stashed in the house.

Dunham said Giffin’s pistol was the only firearm authorities recovered from the home.

According to the FBI, men are more likely to kill their female partners than the other way around. Last year, at least 7% of homicide victims were girlfriends or wives of the accused perpetrators, compared to at least 2% of victims who were boyfriends or husbands. Ex-spouses, common-law spouses and same-sex partners each accounted for less than 1% of known homicide victims.

The relationship between killer and victim wasn’t known in 48% of homicide cases in 2019.

The same week that Giffin was arrested for murder, authorities in Sacramento County arrested 99 people for domestic violence crimes, a review of booking logs shows. Seventy-one of the people arrested were men.

In arguing that her client should be granted bail, Babineau said Giffin likely suffered from battered women’s syndrome. “This is a case that strongly, strongly suggests self defense,” Babineau told the court.

Dunham attempted to poke holes in that defense. She said Giffin told detectives that Hart struck her once 10 years ago, when he was 18, and hadn’t hit her again. The prosecutor also told the court that Giffin’s estranged husband told detectives his wife once threatened to shoot him and claim self defense during an argument in November 2019.

“This seems to be a pattern of behavior for the defendant,” Dunham said. “The defense wants to paint the victim as a bad person, but if they want to contest the facts of the case, their arguments are better served at a preliminary hearing.”

Babineau dismissed the husband’s claim as “simply false” and said it came from someone in a contentious custody battle with her client.

A preliminary hearing was tentatively scheduled for Jan. 19. Over the prosecution’s objections, Judge Patrick Marlette set bail at $1 million, an amount 10 times higher than the defense sought. At the request of the California Board of Registered Nursing, Marlette forbade Giffin, a registered call-center nurse, from practicing if released on bail.

“She’s acted in a way that is completely contrary to her responsibilities as a nurse,” California District Attorney General Kevin W. Bell told the court.

As of Dec. 30, Giffin was still being held in the Sacramento County Main Jail.

The roundup: Restaurants of the near future, a domestic violence ‘wave’ and what happened to that stolen COVID-19 sample

Be the first to comment on "A nurse shot her boyfriend nine times. Was it self defense or another domestic homicide?"