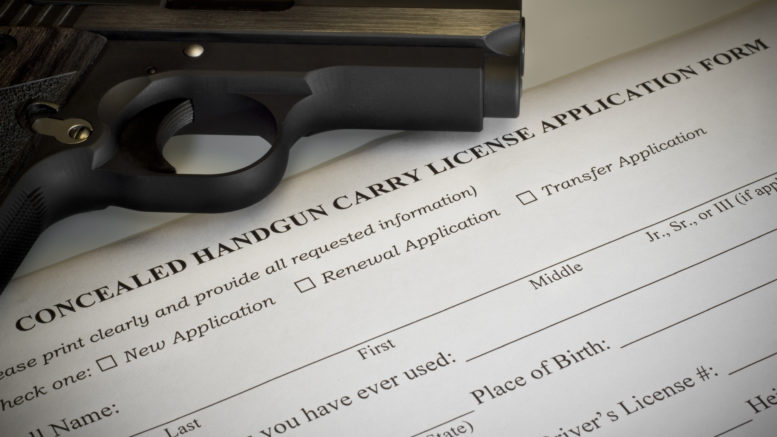 In a year that saw rising gun violence, surging gun sales and predictions of post-election unrest, Sacramento County Sheriff Scott Jones did something he hasn’t done in a decade:

He stopped issuing concealed firearm permits to a well-armed public.

There are nearly 10,000 active licenses to carry concealed handguns in Sacramento County—or one for every 160 residents. There could have been more this year, but the sheriff who was behind the record increase in permits pumped the brakes hard in 2020, an SN&R analysis found.

According to data obtained through a public records request, the sheriff’s office received 2,307 applications to carry hidden firearms through the first nine months of 2020—more than it had in either of the past two years and close to the total the office received for all of 2017.

Yet the department denied 73% of the applications it received this year, showing unprecedented restraint under Scott Jones, a Second Amendment champion who has been criticized for flooding Sacramento with more concealed firearm licenses than almost any other California police official.

“The increase in applications isn’t surprising and probably arises from the same set of concerns that produced an increase in purchases,” said Garen Wintemute, director of the Violence Prevention Research Program at UC Davis.

Those concerns include the current political instability one-term President Donald Trump has fueled by dog whistling to his militia followers while denying Joe Biden a smooth transition into the White House. But few expected Jones, a vocal Trump supporter, to reverse himself on an issue as central to his political identity as gun rights.

“I’ll tell you what really stood out to me is that Sheriff Jones is denying permits,” said Amanda Wilcox, the California legislation and policy chair for Brady United Against Gun Violence. “I would expect more applications. I would not have expected a reduced rate of approval from this sheriff.”

California is one of eight “may issue” states, meaning law enforcement officials have the authority to determine which civilians can carry concealed weapons.

Few elected sheriffs have applied that authority as broadly as Jones.

Jones took office in December 2010 promising to make it easier for civilians to covertly arm themselves. He kept that promise through much of his decade-long tenure, reaching permit approval rates of 90%.

Part of Jones’ logic, he told SN&R in 2015, was to offset recession-era layoffs to his department by arming more residents. His approach drew fire from gun control advocates and Democratic politicians, but also raised his profile in the California Republican Party, which backed his unsuccessful congressional bid in 2016.

But as the pace of mass shootings accelerated and as perpetrators became increasingly linked to white supremacist ideology, national attitudes on guns shifted.

Jones’ approach shifted as well, but only after a critical state audit that he pretended to dismiss.

In December 2017, the California State Auditor’s Office concluded that Sacramento employed a lax definition of what constituted good cause to carry a concealed weapon, likely resulting in more licenses than two larger Southern California counties, Los Angeles and San Diego.

Most jurisdictions require gun owners to demonstrate a credible fear or threat before granting them licenses to carry concealed firearms in public. Jones interpreted his authority differently.

The Sacramento County Sheriff’s Office, the audit found, “granted concealed handgun permits to anyone who expressed an interest in self defense and issued licenses without complying with its internal standards for good moral character, county residency, and training.”

The sheriff’s office also didn’t charge permit seekers the fees required to process their applications, which forced the county to cover the deficit through its general fund.

But the lingering influence of the audit doesn’t explain why denials rose so sharply this year, to the extent that only 629 applicants received licenses to carry concealed firearms through Sept. 30.

Sheriff’s spokesman Sgt. Rod Grassman said he couldn’t speculate why applications rose this year or why the department chose this year to deny the vast majority of them. But he said licenses are often denied or revoked for similar reasons.

“The main reason why permits are revoked and in a broader sense, denied in the first place, is most often due to applicants not fully disclosing details to questions on the application or omitting information all together on the application,” Grassman wrote in an email.

Still, the record-low approvals represent a marked change for the three-term sheriff—and it may be costing him his most rabid support on the right.

A ‘lone wolf’ in martyr’s clothing

The agency then secured what’s called an emergency gun violence restraining order to prevent Casarez from legally possessing or obtaining firearms by contending that he was an “outed white supremacist” at risk of becoming “a ‘lone wolf’ attacker to prove his status to the cause.”

Casarez—a 27-year-old pizza delivery driver who allegedly ran his online hate group from his parents’ Orangevale home under the name “Vic Mackey” (the fictional corrupt detective at the center of the FX antihero drama The Shield)—unsuccessfully opposed the restraining order. But he has become something of a minor martyr for gun rights extremists.

In October, the nonprofit Firearms Policy Coalition filed a civil suit accusing the sheriff’s office of violating the California Public Records Act and seeking all records related to Casarez’s case, as well as warrants and orders regarding other firearm seizures this year.

“People have a right to know how the government is enforcing its laws and policies, especially in cases that involve the seizure of firearms and the suspension of fundamental, constitutionally enumerated rights,” FPC legal strategy director Adam Kraut said in a Nov. 11 release issued by the group.

The sheriff’s office also investigated whether Casarez posted anti-Semitic fliers outside the Temple Or Rishon synagogue in 2017, The Jewish News of Northern California reported in August.

Court records show the sheriff’s office has sought a total of four emergency gun violence restraining orders this year, with two granted and two to be decided.

Since 2017, the sheriff’s office has revoked 259 concealed handgun licenses from gun owners who were convicted of felony, domestic violence or drug crimes, served with restraining orders or deemed a threat to themselves or others, among other causes. The department rescinded 37 permits this year through the end of September.

Meanwhile, nearly 10,000 residents have active licenses to carry concealed handguns in Sacramento County. That represents an almost unfathomable increase from the time before Jones took office.

On Oct. 22, 2009, only 150 Sacramento residents had permits to carry concealed handguns. Eleven years later to the day, 9,718 residents can legally carry hidden firearms most places they go.

Firearm trade associations and media outlets estimate that new gun owners are driving 2020′s exponential rise in gun sales, and Wilcox wondered aloud if a local faction of first-timers was behind the increased requests to privately wield their guns in public.

“The people who wanted [conceal-carry permits] all along … already have them,” Wilcox surmised. “My guess would be many of these [denied applicants] are new gun owners who did not own a gun for years and years and years. So they have less experience.

“Whatever the reason … the fact that he is denying more is heartening to me,” Wilcox said of Jones. “It is; it’s heartening. That’s better for public safety.”

In a July 2020 paper in the journal MedRxiv, researchers estimated firearm sales in the two months from March through May shot up 2.1 million over what they would be in a normal year and 776 more fatal and nonfatal gun injuries “had no increase in purchasing occurred.”

“We find a significant increase in firearm violence in the United States associated with the coronavirus pandemic-related surge in firearm purchasing,” the authors wrote.

More people are trying to kill themselves inside Sacramento jail

Be the first to comment on "As requests to carry concealed firearms soared, Sacramento’s pro-gun sheriff holstered his approval"