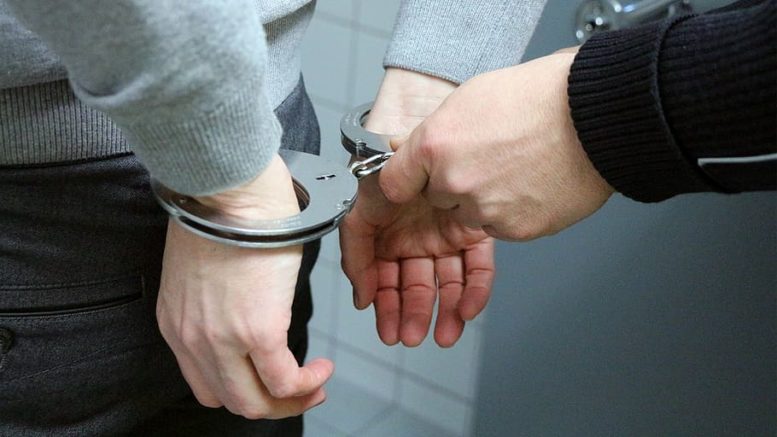 Trayvon Moore-Davis was busted for allegedly shoplifting during a pandemic.

It was about 6 p.m. on March 13—three weeks after Sacramento County reported its first novel coronavirus case, one week after the county declared a public health emergency and just three days after the county recorded its first death from the respiratory illness sweeping the globe.

That Friday, Moore-Davis, a 28-year-old Rancho Cordova man with no listed home address, entered his local Safeway grocery store and allegedly tried to boost some items.

According to a summary of the incident, Moore-Davis surrendered without a fuss. He followed loss prevention employees off the main supermarket floor into their office. When Sacramento County sheriff’s deputies arrived, Moore-Davis told them he was on probation and had an unloaded firearm in his jacket pocket, one deputy wrote. Deputies handcuffed Moore-Davis and patted him down, finding a small plastic baggy containing crystal-like granules, as well as a glass pipe, a pack of unused needles and one syringe loaded with a liquid the color of buttermilk.

Moore-Davis admitted he had used methamphetamine earlier that day.

It was a slam-dunk collar, the kind that was becoming rarer by the day.

As COVID-19 spread across Sacramento, crime and punishment took a backseat.

In the first full week after both the governor and Sacramento County’s top health officer directed the public to stay at home, only 292 people were arrested in the county, with fewer than half of them put behind bars for their alleged offenses.

Those are the lowest figures in recent history and, according to an SN&R analysis, a 71% decline in both arrests and new incarcerations from just a month ago. Just as it did to the health-care system and the economy, the COVID-19 outbreak has forced America’s criminal justice landscape to bow to its pressures.

But to what end?

According to the Sacramento County Sheriff’s Office, Frank P. Swanson turned himself in for the brutal killing of his grandfather.

In a press release, the Sheriff’s Office states that a man called its communications center on March 26 and said he had struck a fatal blow to his grandfather with a baseball bat. Deputies found the 34-year-old Swanson outside his North Highlands residence and took him into custody. Inside they found the 78-year-old victim, who was pronounced dead at a nearby hospital.

The Coroner’s Office hasn’t released the identity of Swanson’s grandfather. Swanson is currently being held without bail at the downtown jail on a single count of felony murder. Because California Supreme Court Chief Justice Tani Cantil-Sakauye has suspended most most court business through April 16, Swanson won’t be arraigned until then at the earliest.

Violent crimes overall haven’t shot up in the wake of a nationwide pause in daily life, but some domestic violence advocates are worried that a global pandemic coupled with a cratering economy could turn some locked-down homes into volatile pressure cookers.

My Sister’s House, a Sacramento nonprofit that serves Asian and Pacific Islander women and children impacted by abuse, is advising its target population to watch out for escalating tensions inside their homes, and to have an escape plan if necessary.

Ninety-five people in Sacramento County, most of them men, were arrested for assaulting or endangering intimate partners, parents or children over the seven-day period that ended March 27, booking logs show. That represents nearly a third of the 292 arrests during the first week under the stay-at-home order, and includes two people who were also arrested on kidnapping or false imprisonment charges, and one also arrested for attempted murder.

But if you go back to a week in January, well before the crisis forced people indoors, authorities made almost the same number of domestic violence-related arrests (91); they just made up a much smaller portion (10.2%) of the 892 total arrests recorded.

Arrests for other violent crimes, such as assault and battery, have also remained relatively static over the past two months.

That’s to be expected, says UC Berkeley law professor Franklin Zimring. After all, there’s less opportunity for crimes of, well, opportunity when people are discouraged from going outside.

“Most of the crime that’s going down is because the relationships that spawn it is going down,” explained Zimring, who has written several books about the criminal justice system. “If nobody’s drinking in bars, barroom brawls go down.”

The Citrus Heights Police Department hasn’t charted a noticeable increase in domestic violence calls, but Chief Ron Lawrence says its radar is up. “Of course that’s a concern with people quarantined in their homes” and the additional economic pressures, he said.

Or, as Zimring put it, “You’re only hurting the ones you’re still relating to.”

Swanson has a history of domestic violence.

He was most recently sentenced to 180 days in jail last July, after pleading no contest to misdemeanor vandalism. But he previously served three years in state prison for assaulting an intimate partner or parent in 2015, online court records show.

Not all post-coronavirus arrests are for violent crimes. And the public health emergency is also creating pressure for those who don’t have a home.

Looking for a place to sleep

On March 14, Luke Richard Mann allegedly entered a vacant room at the American Best Value Inn in North Highlands and attempted to lodge there for the night. But the 21-year-old was discovered, and responding deputies learned that he was also on probation, which allowed them to arrest Mann for not only trespassing and loitering, but violating his probation.

That same night, Michele Janine Thorkelson, 50, was woken by security guards inside a Super 8 by Wyndham motel on Madison Avenue. Thorkelson allegedly refused to leave and sheriff’s deputies were called to the scene to take her to jail.

On March 15, it was James Green, 39, who was rousted while parked in the west economy lot of the Sacramento International Jet Center. Green had already been issued a notice of trespassing order and warned that the next time he would be arrested, which he was.

One thing hasn’t changed since the coronavirus outbreak: Nearly a third of people arrested in Sacramento County have no home address. And at least some of them are looking for a place to ride out the pandemic.

On Sunday afternoon, Sacramento police cited and released three people who were discovered sheltering inside a vacant home in Upper Land Park. In an emailed statement, Asantewaa Boykin, cofounder of Anti Police-Terror Project, criticized the eviction considering that unhoused people have “nowhere to go, no house to shelter in, no sanitary supplies, and no means by which to honor social distancing requirements.”

The one place that always has room for unsheltered people is the jail.

That’s where accused shoplifter Moore-Davis, who also doesn’t have a confirmed address, currently resides. He is ineligible for bail because of multiple prior convictions and isn’t due for another day in court until April 22.

Not knowing what to expect

Chief Lawrence and Professor Zimring acknowledged there aren’t clear historical parallels for the open-ended health crisis the nation is enduring.

Lawrence, who is also the president of the California Police Chiefs Association, said his fellow chiefs are in constant contact, conducting video conferences at least twice a week.

“Each county is dealing with this in a slightly different way,” he said.

Most local law enforcement agencies have closed their public counters and the Sacramento County Sheriff’s Office has suspended almost all jail visitations until further notice, which has drawn concern from Disability Rights California.

Lawrence said his officers are still responding to crimes in progress and enforcing traffic laws, but cold calls are being fielded over the phone or through online reports, and officers are not actively stopping people outdoors to check whether they’re performing essential jobs or tasks.

“We may get to that point, but we’re not there yet,” the chief said.

Lawrence said his officers have been issued personal protective equipment, meaning they arrive to the scene wearing goggles, gloves and filtering masks. And if the situation they’re responding to is stable, officers will ask people to step outside and provide their information while standing six feet away.

“It’s different, for sure,” Lawrence acknowledged. “We’re in uncharted territory.”

In Citrus Heights at least, Lawrence said, calls for service haven’t declined even if arrests have. But he said it was too early to note any trends.

“My guess is that residential burglaries are going to go way down because people are home,” he said.

Meanwhile, the Sacramento County District Attorney’s Office notified the public that shoplifters and petty thieves can be prosecuted under California’s anti-looting law during states of emergency.

Lawrence said his department is prepared to use the sterner statute against anyone caught committing a commercial burglary, petty or grand theft. “I can say in Citrus Heights that we will absolutely be using the looting section if we need to,” he said. “But we haven’t seen that yet. We’re hoping that we won’t have to.”

For now, most authorities in California are only loosely enforcing the governor’s shelter in place order. Lawrence says his department is still in the asking-for-cooperation phase.

“We’re actually seeing a tremendous amount of compliance,” he said.

Lawrence said the public should get used to seeing more National Guard troops providing humanitarian aid and support, such as assisting at food banks or drive-through testing sites.

“I know that’s unusual for people to see the National Guard rolling around the streets,” Lawrence said.

Previous events—the Sept. 11 terrorism attack, the AIDS epidemic, World War II, even natural disasters—all falter in describing the current pandemic, which is projected to get much worse before it gets better. The University of Washington’s Institute of Health Metrics and Evaluation is projecting that the United States will hit a deadly peak on April 15, when the number of critical COVID-19 cases outstrip the number of hospital beds, ICU beds and ventilators by the tens of thousands. According to those projections, California is predicted to record 4,300 related deaths by August.

Zimring, who noted that cities often experience sharp drops in crime immediately after major snowstorms, acknowledged that’s where the comparisons end. “The snow melts a lot sooner than the coronavirus-19 will melt,” he said.