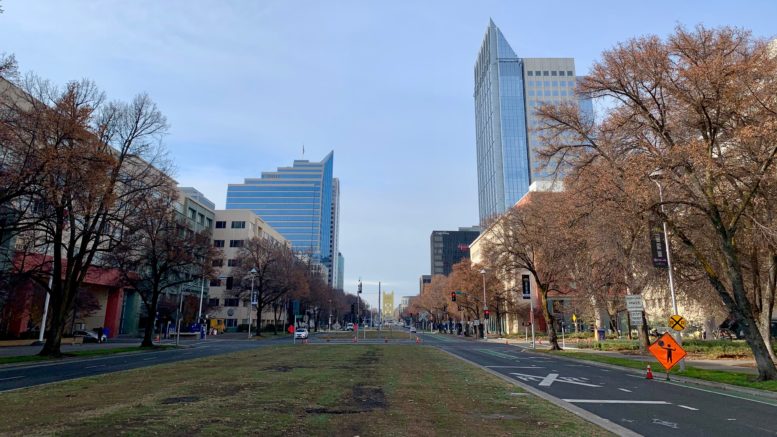 A corporate landlord has been ordered to halt the evictions of more than 50 apartment residents in Sacramento’s River District—the first major test for local tenant protections adopted last year.

It’s unclear whether The Ezralow Company LLC plans to comply with City Hall’s demand to cease holiday evictions for dozens of tenants of a converted hotel on Bercut Drive.

Ezralow notified its residents in October that it planned to sell the Hawthorn Suites By Wyndham building. Ezralow told tenants at the time that it would provide relocation fees for all living there. Another notice came the following month reiterating that message. Weeks later, Ezralow sent out 30-day and 60-day eviction notices.

The company’s new position was that it would not pay relocation fees.

Tenants say the company stationed armed security guards at the complex and blocked off all amenities and common areas as well as certain hallways, limiting residents’ ability to navigate their home.

Tenant Sam Smith spoke of the stress he and his neighbors were under during a Dec. 21 press conference in front of City Hall.

“We’re not asking them for huge amounts of money or anything extravagant,” Smith told the gathering. “We just want them to help us find new places to live.”

Smith said the pandemic and the holidays have made an already tight rental market even tighter.

“Because of COVID, if you apply and get in and then stop paying rent, they really can’t do anything, so a lot of property owners and property management companies are not actually renting,” he said Monday. “This time of year, it’s hard to even get anything processed until January. Right now is really tough.”

Evictions into homelessness were what the City Council sought to curtail when it passed the Tenant Protection and Relief Act in August 2019. The measure, which sunsets after five years, caps annual rent hikes at no more than 10% and bans no-cause evictions for tenants with more than 12 months of continuous residency.

Hawthorn Suites was built in 1988. While the act generally exempts housing units built before 1995 due to superseding state law, it does carve out an exception for former hotels and motels being operated as apartments. On Nov. 14, the city’s deputy senior attorney Sheryl Peterson sent Ezralow a warning letter that it was in violation of the act.

“If those tenants are paying rent and not in violation of the terms of the rental housing agreement, they cannot be evicted as long as part of the property is operated for residential purposes,” Peterson wrote. “If it is the intention … to withdraw the long-term suites from the rental market and operate the property solely as a motel, the ordinance requires at least a 120-day notice period for those tenants who have resided in their suites for more than 12 months.”

Peterson added that any attempt to convert the complex would require permit requests to the city, which it hadn’t received, and that failure to follow the terms of the act would result in a $25,000 fine and potential legal action.

On Dec. 15, attorney Sid Rosenberg responded to Peterson’s letter on behalf of Ezralow. In a 60-page rebuttal, Rosenberg argued that the complex did not qualify as former motel apartments because it still primarily rents to transient guests for less than 30 days.

“Again, this office appreciates the concerns raised by your correspondence, but believe that the conclusions drawn have been based upon the questionable information received from those individuals currently at the subject property,” Rosenberg wrote.

It took Peterson less than two days to reply.

“Your interpretation of the City’s ordinance is incorrect,” Peterson wrote, adding that evictions ran afoul of a statewide moratorium. “[U]nless certain requirements are met, a court cannot issue an unlawful detainer eviction order before February 1, 2021.”

Peterson ended the letter by ordering Ezralow to comply with by the Tenant Protection and Relief Act, as well as state law.

The real estate company lacks accreditation from the Better Business Bureau and has had multiple complaints leveled against it on the bureau’s website.

During Monday’s demonstration, newly minted Councilwoman Katie Valenzuela addressed the crowd. Valenzuela, the only tenant on the City Council, unsuccessfully advocated for a stronger rent control ballot measure that lost in November after her new colleagues and development interests united in opposition. But Valenzuela said she was encouraged by city staff’s attempt to hold Ezralow accountable.

“I do want to commend the city attorney for what they’ve done,” Valenzuela said. “Obviously local and state law means nothing if nobody’s willing to stand by and enforce it. And it shouldn’t fall on tenants who have few resources, if any, to defend themselves.”