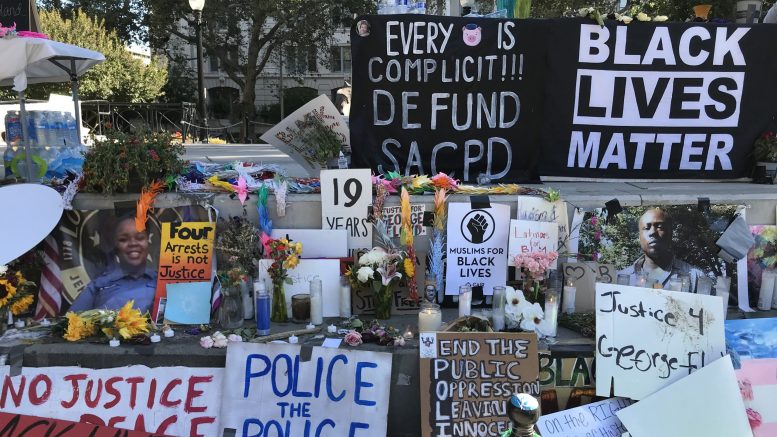 A “Defund the Police” sign sits next to a “Black Lives Matter” sign at Cesar Chavez Plaza, across from Sacramento City Hall. (Photo by Foon Rhee)

Editor’s note: The “Sacramento squad” is urging elected officials and candidates to “just say no” to police money.

It doesn’t quite carry the significance of “Black Lives Matter” or “Defund the Police.”

Still, “Take the Pledge” is a slogan worth watching in Sacramento’s police reform debate.

The “pledge” is to reject any campaign contributions from law enforcement. And as of June 24, 12 elected officials have signed on, including Elk Grove Mayor Steve Ly and Davis Mayor Pro Tem Gloria Partida.

As four women of color, some are calling them “the Sacramento squad”—a local version of “The Squad” of Democratic congresswomen elected in 2018. They’re calling on all elected officials and candidates in the Sacramento region to sign on to the pledge.

“Policing, as it exists today, is deeply rooted in a legacy of slavery and is the very definition of systemic racism. From slave patrols, to the enforcement of Jim Crow segregation, to the militarized ‘war on drugs,’ to the ongoing brutality and murder of Black people and communities of color—the track record of violence is undeniable. Reinforcing this structure is the outsized influence of police unions and their lobbyists in undermining any efforts to hold law enforcement accountable,” they write in their appeal.

“Historically, law enforcement and their associations have used their political contributions and power to warp the conversation about public safety. Accordingly, elected officials that receive those contributions undermine community trust in their ability to perform that oversight role. It is time to end this conflict.”

“Historically, law enforcement and their associations have used their political contributions and power to warp the conversation about public safety.”

The Sacramento Police Officers Association has long been a powerful player in local politics—endorsing and donating money to local and legislative candidates, funding campaigns for or against measures and sending issue mailers to voters.

For instance, in the March primary, the police union gave $25,000 toward a campaign led by the firefighters union to defeat Measure G, which would have set aside more money for children’s and youth programs in the city budget.

The SPOA and its president, Timothy Davis, have condemned the killing of George Floyd in Minneapolis, the flashpoint for the nationwide protests, and have called for the creation of national standards for use of force by officers.

“We hold ourselves to the highest standards. This list shows another example of our diligence and commitment to continue to review policies and take action, not only to improve the profession, but our connection with the community. We’ve added quality training and reformed policies to evolve policing to a leading edge that we hope other departments and our nation will take action as well. Thank you, Sacramento, for your support.”

The ultimate goal of the pledge is to lessen the influence of police unions enough to make it less politically risky for local elected officials to take actions that the union opposes.

But as of this week, no current Sacramento City Council member has signed the pledge—and they’re the ones who have the most power over the police department and its budget.

Be the first to comment on "Take the pledge"