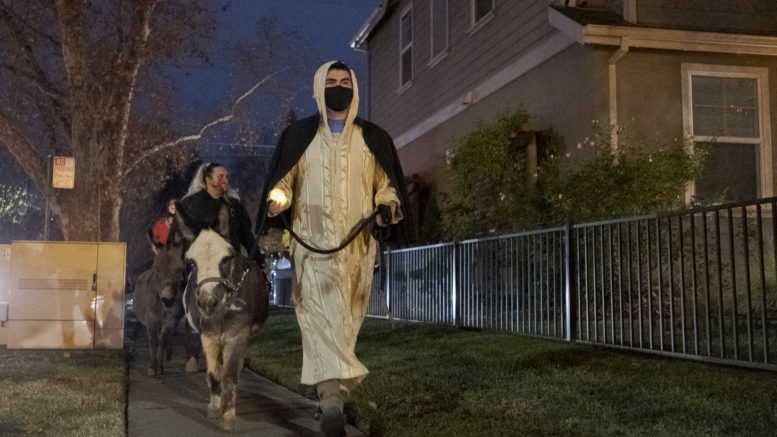 A desperate, long ago nighttime walk in Bethlehem was recreated this week to bring attention to what unemployed tenants are going through during the pandemic. Photo by Patrick Hyun Wilson. Full photo gallery at the bottom.

As the end of California’s eviction moratorium looms, protesters use live animals and a timeless tale

On Wednesday evening, a procession of donkeys, goats and ancient Judeans approached Assemblyman Kevin McCarty’s midtown Sacramento home by lamplight. It was la Posada, a celebratory reenactment of Mary and Joseph looking for shelter to give birth to baby Jesus – a cherished tradition observed by Latino communities around the world. La Posada references one of the most famous stories in history about individuals being worried and vulnerable when there’s no room at the inn.

But the people arriving at McCarty’s house that night weren’t there to lift his Yuletide spirits, but rather they were acting as a collective Ghost of Christmas future: They were there to urge the assemblyman to take a leadership role in preventing the long-feared eviction catastrophe that could happen when special tenant protections expire at the end of next month.

The Posada demonstration was organized by the Alliance of Californians for Community Empowerment, a group that’s been raising alarm bells about a recent Moody’s report that found 12 million American renters will owe an average of $6,000 in back-rent by January because of job losses from the COVID-19 pandemic. The same report found 2 million California households have “little or no confidence” in their ability to pay January rent.

The situation has been tense in Sacramento County. So far, landlords and property management companies have filed more than 496 unlawful detainers in superior court. An unlawful detainer starts the legal eviction process in cases when a tenant feels wrongfully outed. These evictions have occurred during times when special pandemic protections weren’t in place. The region has also seen some landlords find loopholes in state and local moratoriums to proceed with evictions.

One of the people who feels that insecurity around what will happen in January is Sacramento’s Tia Kilpatrick, who was dressed up playing the part of Mary. She lost her livelihood when gyms were shuttered in March.

“Myself and my coworkers are finding ourselves having to find new work or being among the ranks of the permanently unemployed,” Kilpatrick said.

She and other demonstrators were specifically asking McCarty to trumpet assembly bills 15 and 16 when the legislature is back in session in January.

AB 15 extends the eviction moratorium to next December. AB 16 would offer rent relief for tenants and assistance to small landlords who are struggling from not getting rent. The statewide eviction moratorium stays in place until Jan. 31, 2021, but renters must come up with 25% of the rent they owe from Sept. 1 through Jan. 31, and must pay back all missed rent by March 1 to keep their roofs over their heads.

“He’s actually one of the ones who has been an ally on certain initiatives before,” ACCE organizer Ibraheem Bangura said of the assemblyman, “but we wanted to reach out to him and see if he would champion us on these issues.”

A bundled-up McCarty came out to speak to the tenants and listen to their concerns.

“He was hospitable and warm,” Kilpatrick said after. “He had his whole family come out to greet us. He even offered to get us hot chocolates.”

Before the demonstration began, ACCE referred to reporters a study by UCLA that determined evictions have caused more than 400,000 COVID-19 infections around the country, as well as at least 10,000 deaths.

Cesar Aguirre, who portrayed Joseph that night, said the stakes around organizing for the two bills couldn’t be higher. In August, housing advocates watched as Gov. Gavin Newsom ditched a strong bill to protect both tenants and small landlords from finical ruin by Assemblyman David Chiu in favor of a comprise bill more palatable to large corporate banks. That move only forestalled what’s been described as a coming eviction tidal wave until the end of January if Chui’s new bills, AB15 and AB16, aren’t passed. Tenants and mom and pop landlords are now waiting to see if lawmakers and Newsom will bow to the banks again.

“We’re going to be following up with our assembly members, making sure that they feel that pressure, that they understand that folks need these protections, that folks need to be kept in their homes for Covid safety and for the fact of housing being a human right,” he stressed. “Next steps for us and for everyone is to make sure that we’re plugged in to whatever needs to be done.”