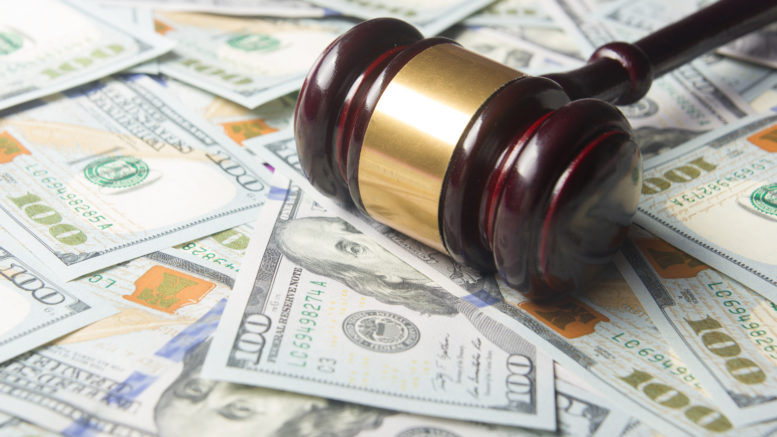 When you’re poor, even the cracks have cracks

The Los Angeles attorney secured the money last year as part of a $1.9 million settlement for low-income tenants of a mold- and pest-infested apartment complex in South Sacramento. And while 44 of the plaintiffs took their share of the winnings and used it to move, eight children are still due their life-changing portions more than two years later.

“The money is still in my client trust account sitting there,” Citron explained during a brief videoconference appearance before Sacramento Superior Court on Nov. 5.

It was a first for the veteran civil practitioner, as well as for the judge listening to him.

“Well, I’ve never had anything like this, either,” replied the Hon. Allen H. Sumner.

The lengths to which court officers are going to disperse the remaining settlement funds—and the reasons they’re due in the first place—provide a glimpse into poverty’s boundless complexities, at once confounding to amend and easy to exploit.

The upshot of living at Saybrook Apartments is its accessibility. Roped in by the 47th Avenue off ramp and buttressed by a flat, empty field, the former motel is a T-shaped building that has offered sub-market-rate, subsidized housing since 2005.

There aren’t many landlords who accept what used to be known as Section 8 vouchers and what Sacramento unironically calls Housing Choice Vouchers. On Nov. 24, only 74 listings were being advertised on the website GoSection8.com, where the Sacramento Housing and Redevelopment Agency refers voucher applicants and where landlords who accept them advertise their available units.

In 2018, SHRA received 40,000 applications just to get on the voucher wait list. There are fewer than 12,000 vouchers circulating in the county at any given time.

This is why the complexes that accept vouchers rarely have vacancies, noted Citron’s co-counsel, litigator Philip Treacy. That high demand means tenants often feel lucky just to have a roof over their heads, even if it’s leaking.

Saybrook requires prospective tenants to be formerly homeless and to have at least one disabled adult in their household to qualify for a subsidized unit, though it won’t lease to anyone with a criminal background or previous bankruptcy. Treacy said most tenants are recently homeless mothers who have survived abuse and have an emotional or behavioral condition, such as bipolar disorder, schizophrenia or PTSD.

“Most of them are single women with multiple children,” Treacy told SN&R. “They’re trying to put their lives together. … But then they’re not treated right.”

Treacy and Citron said the powers that managed Saybrook Apartments took the idiom “beggars can’t be choosers” to the extreme.

“A lot of tenants will describe it as a living hell,” Citron told SN&R in a phone interview days after his court appearance. “Nearly everyone we represented in the last lawsuit used their money to get out.”

Citron’s law firm filed its lawsuit in February 2018 on behalf of 52 tenants, including 19 minors under the age of 14. The occupants described an array of substandard living conditions, spanning toxic mold, vermin infestations, improper ventilation and water damage. What passed for repairs were “band-aids to pass inspection,” Treacy said. One client suffered a collapsed lung while others reported respiratory problems and other maladies, such as migraines and skin rashes.

Treacy said one family was temporarily moved out of their unit due to the severity of the mold issue only to be informed after the fact that their possessions had to be destroyed because the rot was so bad. “Photographs of grandparents. Things that can’t be replaced,” Treacy remarked.

Tenants who complained were threatened with eviction or the loss of their housing vouchers, the attorneys said.

“It’s these poor people, who at least consider this place better than sleeping on the streets, they’re the ones who suffer,” Treacy said. “There are not that many places to go.”

In Sacramento, many of them are owned by the same company.

But it doesn’t own Saybrook; it shared legal billing with a fleet of interconnected businesses that do: Preservation Southpointe L.P., Preservation Properties II LLC, Squier Properties LLC and their umbrella corporation, Pacific Housing Inc.

Pacific Housing is what’s termed a nonprofit public benefit corporation, structured to pursue the public good in exchange for tax exempt status. According to the state Attorney General’s Office, benefit corporations have to register with and report to the state, and cannot distribute assets for private gain.

But unlike traditional nonprofits, benefit corporations are run by owners and shareholders who face less potential legal liability than leaders of for-profit companies.

Treacy said these nonprofit corporations grew in popularity around the turn of the millennium, when government officials farmed out the response to an emerging housing shortage to private companies willing to create or convert affordable living units in exchange for public financing and tax incentives.

“They do this not out of the goodness of their heart,” Treacy said of benefit corporations behind complexes like Saybrook. “There are tremendous tax benefits when you purchase and lease properties like this to people who are homeless.”

At the end of 2017, Pacific Housing reported assets of $3.4 million, IRS filings show. Company chairman, president and CEO Mark Wiese earned more than $227,000 in total pay and compensation that year, while his CFO claimed $216,000. Founded in Davis in 1998 under original president Steve Conti, the company now lists an office suite at 21st and J streets as its headquarters.

As for the subsidiaries that connect back to Saybrook, Pacific Housing and Wiese, their financials were clouded from public view.

Using a P.I. to track down children

At the November hearing, Citron explained that he was forced to hire a private investigator to track down the parents and guardians of the children who were still owed settlement money. But finding the adults didn’t address the problem.

“They’re unwilling to go to the bank to open their minors’ accounts,” Citron told Judge Sumner. “As the court may well imagine, I wanted the case wrapped up last year and we’ve literally exhausted any and all effort to get these accounts open.”

“Well that’s amazing,” Sumner replied. “For each child that’s a $10,000 check that [their] parents are refusing to cooperate to get a deposit.”

Citron, who has handled foster and tenant habitability cases in the past, never experienced a complication like this. But he noted that he was dealing with adults who had experienced homelessness and mental health issues, and whose experiences with the system were largely negative.

“A lot of the parents in this particular building were chronically homeless and/or had mental health issues and they were there on a voucher program,” Citron said.

The judge decided to appoint a public guardian to set up the bank accounts and inform the children of the accounts’ existence. The funds awarded to the minors can’t be accessed by their guardians, and are guaranteed to the children once they turn 18.

“I don’t want the money to just sit in a bank account,” Sumner said.

Since the lawsuit, Saybrook has cut ties with the John Stewart Company, which became the complex’s property manager around 2016, Citron said. Not long after John Stewart took over, one of Citron’s past clients told him of the issues at her apartment complex.

The company manages multifamily real estate properties, including a substantial number of subsidized properties in Sacramento and the Bay Area, Treacy said.

“It’s a lucrative business,” he said.

The John Stewart Company’s namesake died at the age of 86 in September following a two-year battle with cancer. Representatives for the company and Pacific Housing Inc. didn’t respond to multiple requests for comment.

While Citron’s 2018 lawsuit resolved last year with its nearly $2 million settlement, Citron and Treacy filed another lawsuit earlier this year on behalf of 76 other Saybrook tenants, including 36 minors. Treacy said the complex would require a major overhaul to address its structural problems.

The new lawsuit has been stalled by COVID-19. Citron said the parties are at the beginning of the discovery process and that he’s hopeful to start mediation by Christmas. But he’s heard distressing accounts of continued tenant harassment. Citron said tenants are being forced to allow monthly housekeeping inspections with little notice and under threat of eviction.

“Housekeeping is not a reason for a 24-hour emergency inspection under the civil code,” Citron said. “It’s flat-out illegal. I have asked them to stop.”

The management company that replaced John Stewart in February appeared to be more responsive to tenants’ concerns, but ran up against owners’ reluctance to invest in major reconstruction, Treacy claimed.

It appears that Saybrook and its well-known structural problems may soon become another company’s problem.

In February, the Sacramento County Board of Supervisors awarded developer Jamboree Housing Corp. $2.8 million in tax-exempt mortgage revenue bonds and restructured debt to acquire and rehabilitate the cluster of two-story residential housing units. Jamboree is also seeking $14 million in multifamily housing money through the state to replace the roof, address moisture issues, upgrade the units and add 27 new ones for a total of 88 residential units.

The attorney said he wasn’t surprised Pacific Housing would seek to divest itself from the apartment complex after the last settlement and that the change in ownership had no bearing on the current lawsuit.

The contract between the county and Jamboree Housing, Treacy added in an email, “shows that the owners are and were fully aware of the conditions of which we complain of and what our lawsuits are about.”

Essay: Sacramento is no Portland

Be the first to comment on "Eight kids are owed money for living in a mold-infested complex. Here’s why they don’t have it."