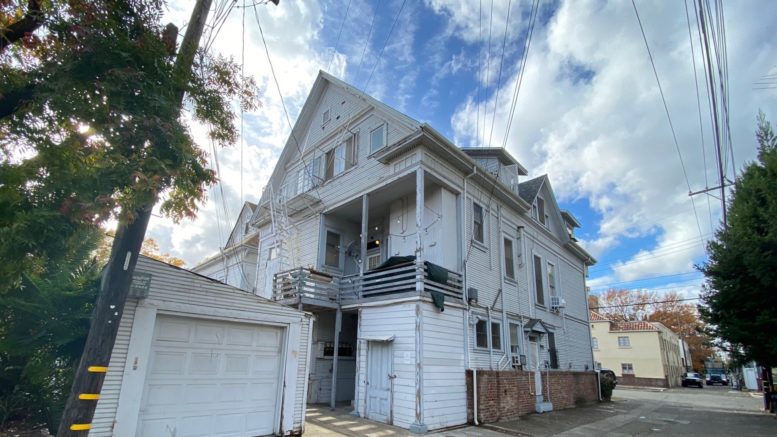 One of two potentially historic buildings on 26th Street that University Art Center Inc. is planning to demolish after evicting tenants. Photo by Naomi Wilson

University Art Center Inc. bills itself as a family-run success story with a 70-year legacy of providing great customer service while helping creative communities thrive. But the Bay Area business, which offers art classes, supplies and framing services, may have a hard time maintaining that image after it moved to evict several tenants of two Midtown Sacramento homes it plans to demolish during the COVID-19 epidemic.

The renters are now vowing to take their fight to City Hall. The breaking story also prompted some current and former employees of University Art to tell SN&R about alleged dilapidated conditions within the art center itself.

According to University Art’s website, the company was founded in Palo Alto in 1948 by Lauri and Virginia Cappiello along with their father Anthony, who’d decided to spruce up a small stationary store with picture frames and painting supplies. As Silicon Valley grew, so did the business. University Art now has locations in Redwood City and Sacramento. A photo of the company’s two founding matriarchs still proudly graces its website.

But University Art’s humble origins lost their luster for eight Midtown tenants who face being ejected from their apartments at the end of November.

The company in July sent 120-day notices to vacate to everyone living in two adjoined Victorian-style houses it owns on 26th Street. University Art intends to demolish the buildings. For the “demoviction” victims, what was galling was just how many problems they’d had with University Art’s property management leading up to that moment.

“The dangerous conditions at the property have languished for years after those conditions were made known to you,” read a recent joint letter from the tenants to University Art. “You have been aware for an extended period of time that the stairwells at the property are unsafe, not up to city code, and have chosen not to remedy the problem, but instead, continued to lease the property to tenants with full awareness of the potential dangers to its residents.  Moreover, when these issues were repeatedly raised by multiple tenants over the course of the last several years to Nielsen Property Managers, you continued to deny requests for repairs. And again, all the while you continued to re-lease the property to new tenants.”

From the renters’ perspective, University Art is demolishing the properties to avoid making repairs mandated by city code. The prospect of losing their homes amid a third wave of COVID-19 infections and another economic lockdown is beyond unethical, the tenants argue.

“This is not the time that I want to be moving,” said Veronica Luvisi, who lives at the property. “When I heard about the eviction, all of this terrible stuff from 2020 felt like it was piling on me at once.”

On Nov. 19, University Art sent a letter to its residential tenants stating that the decision to remove its apartments from the rental market was made after the company exhausted its “options to make economical repairs and renovations to the property.”

University Art spokesman Charlie Affrunti declined an interview request, but told SN&R via email that the company is proceeding with the evictions for the safety of its tenants. “This was not our ideal choice,” he wrote.

The tenants aren’t the only ones saying that University Art neglects the buildings it owns. Travis Owen, who worked for the company in Sacramento on and off since 2008 before quitting in the summer, said the actual art facility had numerous potential health and safety code violations, including holes in the floor intentionally covered by floor mats, falling insulation and rodent droppings from broken parts of the ceiling, and air conditioning units that were inoperable at the height of summer.

A current employee at the center, whose name is being withheld to protect their job, corroborated the account and provided SN&R with photographs of the floor holes and hanging insulation.

Affrunti said that the reported health and safety issues inside its art center are being addressed.

Tenant Bobby Castagna said the next move for those living in the buildings is to contact their incoming Sacramento City Council representative, Katie Valenzuela, to explore any ways for the city in intervene.

For Luvisi, a lot is riding on what happens in the coming days.

“It’s really hard to finding housing right now,” she said. “And the rental market in Sacramento is really high-priced with not many options.”