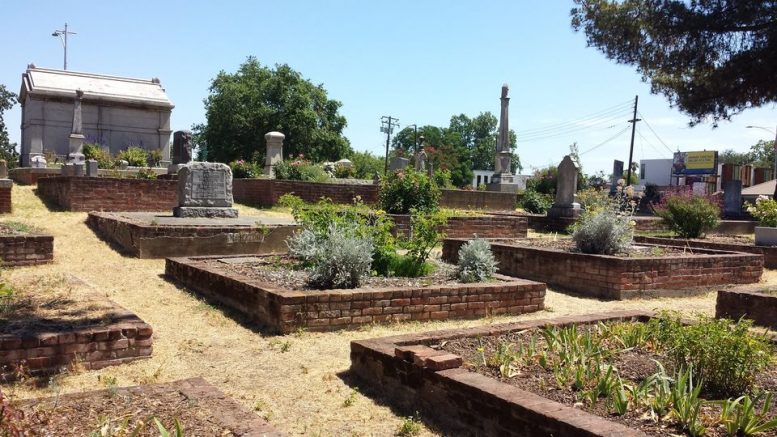 All the familiar arbors and arches are gone in the Historic City Cemetery's famous rose garden, as seen in this June 2020 photo. Many bushes have been pruned to the ground or totally disappeared. (Photo courtesy of Preserving the Cemetery's Beauty)

On Wednesday, the Sacramento Preservation Commission will consider removing the rose garden. Many rose bushes have already disappeared.

Wednesday, the city of Sacramento’s Preservation Commission reviewed a 36-page report for a five-year preservation plan for the Historic City Cemetery. That plan recommends the removal of most of the ornamental plants in the cemetery, including the dissolution of the two-acre rose collection as a “garden.”

UPDATE: After hearing public comments supporting the rose garden, the commission asked for more information before making a final decision.

For decades, the cemetery has been home to three major garden collections devoted to heritage and antique roses, perennials and California native plants. All three gardens are at risk.

Longtime volunteers for the cemetery gardens are deeply concerned.

“We have treated the cemetery with the utmost love and respect,” said Anita Clevenger, who served for many years as the rose garden’s curator. “The report rejects all previous plans, and the listing of the cemetery on the Federal Register, by stating that the modern gardens have no standing as historic features and that the emphasis for the cemetery must be preservation of historic hardscape and landscaping.

The recommendations are to remove “non-historic” vegetation, not present before about 1962, and to replace turf with decomposed granite and plants with mulch, Clevenger said. “What a barren prospect.”

A Facebook page, Preserving the Cemetery’s Beauty, has kept track of the changes.

Attracting rose lovers worldwide, the cemetery rose garden had been internationally recognized as one of the best collections anywhere of rare and antique roses, many not found in any other public space. In 2011, the cemetery garden was among the original inductees into the Great Rosarians of the World international hall of fame as a “living library of rare roses.”

But roses in the cemetery have been a prickly issue since 2016. That’s when the city first issued recommendations that called for the removal of all decorative arches, arbors, trellises, tripods and other metalwork, as well as any plants growing in plots or within one foot of monuments.

The goal of those changes is to better preserve the stone monuments and restore the cemetery to an earlier historic period, according to city reports and staff.

When those changes were first proposed, the all-volunteer Heritage Rose Group stirred up a fuss that gained national attention. They packed City Council chambers and pressed council members to save the roses.

“We have treated the cemetery with the utmost love and respect.”

Initially sparing the roses, the city formed a task force, and a series of studies and reports followed. Earlier this year, Tom Liggett—a rose expert who worked with the city of San Jose on its historical rose garden—was brought in as a special consultant.

Then, the pandemic hit. The cemetery’s major garden event in April was canceled and volunteers were discouraged from working in the gardens. All 2020 tours were canceled, including the cemetery’s popular pre-Halloween Lantern Tours.

Working with city staff and on his own, Liggett chopped down to the ground huge climbers and tree-size bushes. He continued severe pruning through the summer heat, considered the worst time to prune roses. Many roses disappeared, along with all 30-plus arbors and arches. Many roses were eliminated from the garden’s 500-plus collection.

Also gone: The Historic Rose Garden’s sign and most of the plant identification tags.

According to the city staff report, “The goal of this work is to meet preservation standards and have all staff and volunteers working towards a shared goal of maintaining these historic cemetery grounds.”

City staff also contend that the rose garden, established in 1992, and its volunteers never had official permission and that the garden was not appropriate for its historical setting.

What will the future Historic City Cemetery look like? If these recommendations go through, a lot less rosy.

Heart to Art with AndYes