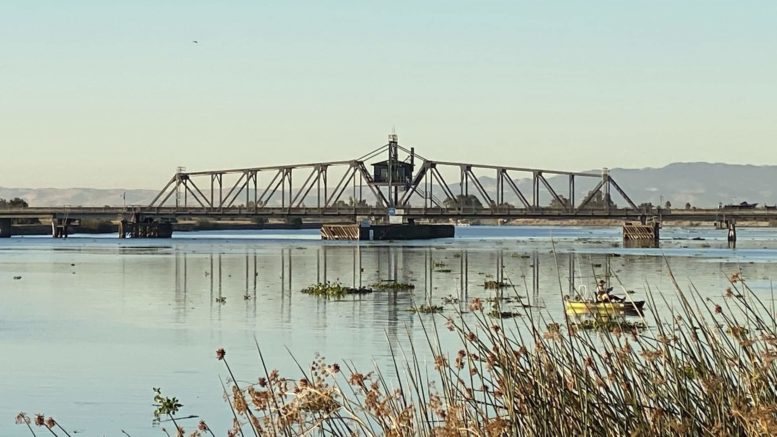 A fishing boat drifts through the California Delta. (Photo by Gregory Mitchell)

The Metropolitan Water District’s board of directors voted Tuesday to spend another $58 million to support the study and design of an underground tunnel in the North Delta that would divert large amounts of fresh water and send it to municipalities and agribusinesses in southern California.

The board voted after hours of public comment in opposition from environmental groups, Native American tribes and MWD’s own ratepayers. One word that was repeatedly used was “unconscionable.”

The Metropolitan Water District of Southern California has already spent tens of millions of dollars to help finance a joint powers authority that’s working under the direction of the state Department of Water Resources as it tries get approval for the tunnel. The tunnel is estimated to cost $22 billion, though that could change since the project is only midway through development. DWR says that MWD and nearly 30 other state water contractors will ultimately reimburse taxpayers for the costs, though a number of those contractors have said they won’t.

Several years-long attempts to build similar conveyance systems in the Delta have failed in the last four decades. That’s partly because a number of independent hydrologists, biologists and engineers have identified catastrophic effects on the Delta’s ecosystem. The tunnel would also turn parts of the rural Delta into industrial zones, unleashing more than 15 years of construction on historic towns along the Sacramento River.

Residents and farmers from Hood to Rio Vista have said the tunnel’s construction would make their lives unlivable.

Those points were made again by Delta residents during Tuesday’s MWD meeting. Barbara Barrigan-Parrilla, a Stockton resident and executive committee member of Restore the Delta, told MWD directors that the long-term consequences of the tunnel are so extreme, given the threat global warming already poses to the estuary, that the project would create California’s first climate refugees.

“Hellfire has reached California,” Frost said. “We need to listen to that message that’s coming from the environment. This is a state that’s altered its hydrology to such a point that we’re now selling paper water.”

The Sierra Club and the Natural Resources Defense Council also spoke out against the proposal, along with residents phoning in from across the state during the three-hour hearing.

“You’re going to take a source of water that has its own habitat and destroy it? It will be a wasteland,” said Joyce Summers of San Jose. “That natural habitat for our fish and wildlife is essential for generations into the future.”

Another resident, Melanie Cohen, emphasized that the Delta is for all Californians.

“If you do care about the people in the state, you need to understand how important the Delta district is and how this project would hurt many, many more people—and the environment—than any project we could do,” Cohen said. “They say that being insane is doing the same thing over and over, and we forget that for 90 years they’ve been trying to do this project. Why?”

Numerous MWD ratepayers invoked the ghost of Owens Valley, the once-lush ranching and farming area in the eastern Sierra that was fallowed and devastated a century ago to provide water for Los Angeles. L.A. resident Barbara Hensley told the directors that a similar fate should not be visited on the Delta, but rather there should be a focus on more water recycling projects.

“We do not need this boondoggle in the midst of a pandemic,” Hensley said. “Angelenos, we all know, every time we travel to Northern California, we get beat on for taking all its water. Why do we need to keep feeding into that image when we don’t have to?”

Santa Monica resident Joe Harden agreed, adding that some of his neighbors weren’t taking water conservation seriously. “I still see lawn sprinkler water running down the gutters and into the storm drains here,” Harden said. “We need to use local resources.”

Among the hundreds of public comments, only two MWD ratepayers expressed support for the tunnel. The remaining support was voiced by various Southern California business groups, construction unions and utility districts, most of whom argued that building the tunnel would provide jobs and bring water stability to an important sector of California’s $4 trillion agricultural economy.

“Decisions on water reliability must not be based on politics, but on sound engineering and analysis,” said Robert Hunter, general manager of the Municipal Water District of Orange County.

But Sherri Norris of the California Indian Environmental Alliance said MWD and the state’s analysis had been done without input from indigenous people or regard for the tunnel’s impacts on cultural sites and traditional subsistence fishing.

“The tribes in the footprint area of the San Francisco Bay have not agreed to the project,” Norris said.

A number of tribes living along the Trinity and Klamath rivers, most vocally the Winnemem Wintu Tribe, have opposed a Delta conveyance system for years.

Opponents also raised concerns about public health. Last summer, the city of Stockton’s waterways experienced some of their worst toxic algae blooms. These green surface slicks cause dangerous gastrointestinal and respiratory problems in humans and can turn in to wind-blown aerosols.

Given that the Delta tunnel would reduce fresh water flows at the very same time as California’s temperatures are rising, many environmental groups are worried toxic algae blooms will become uncontrollable, particularly in Stockton. As of last year, Stockton’s air quality failed to meet all three critical standards of the American Lung Association.

“We should employ the precautionary principle, and in the absence of data, we should err on the side of the caution,” she said. “I’m especially concerned about the impacts on Stockton, and I don’t think it’s fair to encroach on their already poor air quality.”