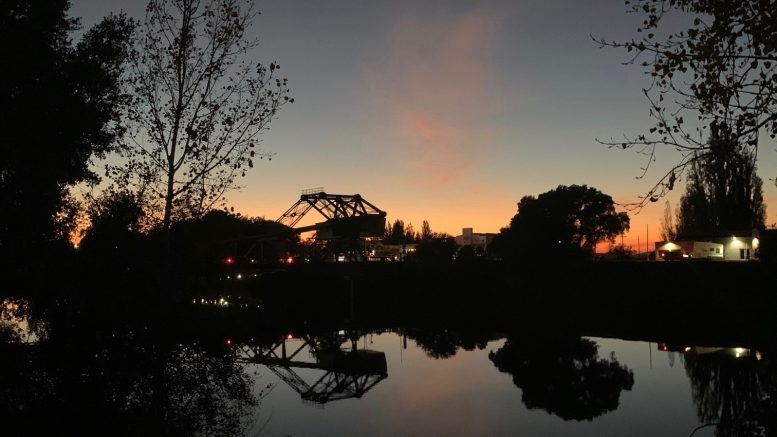 Sundown in the town of Walnut Grove. Photograph by Scott Thomas Anderson

By Blynn Beltran and Tyler Day

A small town in Sacramento’s sliver of the Delta has been gradually losing residents for years – and saw the quickest population decline in the area during the last decade among places with more than 1,000 people.

Located 30 miles south of the city, Walnut Grove was one of the earliest U.S. settlements along the Sacramento River. It’s remained a relatively small and tight-knit community; however, the amount of people living there dropped 6% in the last ten years, from 1,542 in 2010, to 1,452 in 2020, according to new Census 2020 data.

The number of children in town has fallen even faster, dropping 13% in the last decade, boding ill for the future.

The town’s longstanding heritage is shifting, too. Historically, Walnut Grove has had a large population of Japanese and Chinese-descended residents from as early as 1914. Many Chinese immigrants came to the Delta before World War II and settled in Locke and Walnut Grove. But now, just 6% of people here identify as Asian, while the majority identify as either white or Hispanic.

Kim Tranum owns Hair On The Delta, a salon on the main stretch of road that cuts through the town. She’s lived Walnut Grove for 30 years and is active in its Rotary Club. Her hair salon is doing fine, but many other businesses have not been so lucky. Tranum says Alma’s River Cafe, which is right next door, has had five different owners since she’s been in business, and now the cafe doors may be closing permanently.

“Not many businesses have lasted this long,” Tranum said. “I’m lucky that I’m still here.”

As Tranum talked, an older Asian-American woman politely walked to the back. Tranum noted that the woman is 95-years-old. Many Japanese or Chinese-descended residents who remain here are older now. If they have children, those members of the community have tended to leave for other cities or suburbs.

But people aren’t just leaving Walnut Grove for other parts of the area – they’re leaving California as a whole. The state’s Finance Department recently released numbers that confirmed about 260,000 more people left California for other states than came here between July 2019 and July 2020.

“I think they’re leaving California,” Tranum said. “A lot of my customers have left this area to live in a different state.”

Christina Doyle works at Mel’s Mocha & Ice Cream, a popular place for farmers to hang out in the early mornings. She has lived in Walnut Grove for 12 years and has thought about leaving many times.

She said she was tired of politics in the state, “because of Newsom to be perfectly honest.” But she has kids and doesn’t want to uproot the family right now. Others share a similar sentiment.

Tranum says she’s the only one in her family that has stayed in Walnut Grove, but she wants to continue to run her business and serve the community she’s been a part of for so long.

“My family’s all gone right now and, yeah, I have thought about leaving,” Tranum said.

Another reason many are leaving Walnut Grove is the current housing market.

The median house value in Walnut Grove housing cost $515,522, according to Zillow. In comparison, Sacramento and Rancho Cordova houses have a median of $468,036 and $502,093 respectively.

Chris Menke purchased Al’s Place in the community of Locke, a beloved landmark business in the town. The census bureau considers historic Locke part of Walnut Grove. The wife of the previous owner put the bar and restaurant for sale the year before. Menke stepped in because he’s always loved Al’s Place. The San Francisco resident “rolled the dice” and has been running it since January of 2021.

“It was her husband’s passion not hers,” Menke said. “She went through the motions and she realized it wasn’t for her.”

Menke does not live in Walnut Grove when he’s in town. He stays in his boat in Isleton, about 10 miles west up the river.

In regards to people leaving the town, Menke remarked that one of his friends is having property issues. “It is out of his control,” he said.

The Big Store in Walnut Grove catered to many former residents, but population declines within the town have affected business.

Guillermo “Memo” Castellanos runs The Big Store with his mother Martha Castellanos. He said that they used to order around 6 to 8 pallets worth of groceries every month, but are now down to three, with one pallet for bottled water.

Martha Castellanos lived in Ryde until 1997, a place three miles away from Walnut Grove on the river. Even she eventually moved out of the Delta, resettling in Galt.

“We rely on older residents that shop in places like this,” Martha said. “And the youngsters, they want to go and explore.”