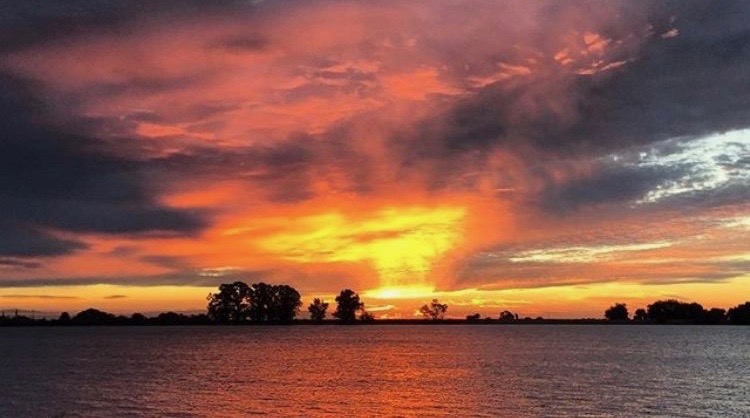 The sun rises over the rural California Delta, part of which the state plans to convert into an industrial zone with its massive tunnel project. (Photo by Gregory Mitchell)

“Defendants are all persons interested in the validity of the Delta Program Revenue Bonds,” Michael Weed, an attorney for the state Department of Water Resources, wrote in a lawsuit his agency recently filed as a preemptive strike against any and all potential opponents.

It’s a move that conservation groups are calling a legal action against every Californian concerned about borrowing billions to build a highly controversial water project that won’t be completed for at least two decades.

DWR’s lawyers have learned some lessons during the 38 years the agency has been attempting to build a massive conveyance system to channel fresh water from the north Delta to agribusinesses in central and southern California: One of the biggest potential roadblocks is that citizens will use the legal system to try to stop what they view as a wasteful, one-sided use of their tax dollars.

That’s a hurdle it hopes to avoid during its latest attempt to green-light the project, this time under the direction of Gov. Gavin Newsom, who in May 2019 scrapped former Gov. Jerry Brown’s twin-tunnel project in favor of a single tunnel plan. In August, DWR filed a validation lawsuit in Sacramento Superior Court for the bonds it plans to issue to finance part of the tunnel’s design and construction, a legal maneuver that aims to block any resident or group from ever challenging the legality of those bonds.

The current cost estimate for the tunnel is $22 billion, though that could change since the project is only midway through development. DWR maintains that some 29 state water contractors will ultimately reimburse taxpayers for the costs, though a number of those contractors have said they won’t.

Any conservation group or local government that want to challenge the department’s lawsuit has until the end of October to file their opposition. Doug Obegi, a senior attorney from the Natural Resources Defense Council, expects to see a multi-party showdown, especially since the tunnel’s design is not finished and hasn’t had an environmental review. Obegi says DWR’s lawsuit is asking for a blank check for the future

“A validation lawsuit has effects that can last for decades and generations,” he told SN&R. “This one seems designed to lock in the ability of DWR to collect the costs of a Delta tunnel project for decades to come, even though the state Constitution and state laws restrict the authority of local water districts to impose rates and charges to pay for a tunnel.

But DWR argues that the California Supreme Court has ruled that the state has an ironclad right to issue such bonds to meet water needs when it decided in favor of the legality of the 1960 Burns-Porter Act, the voter-approved bond measure to finance the State Water Project under Gov. Pat Brown.

“In describing the Department’s authority under the Burns-Porter Act, the California Supreme Court has stated that ‘the conduct of an important public enterprise [such as the Project] requires that broad power and discretion be granted to the administrative agency in charge of the project,’” Weed wrote. “The fundamental purpose of a validation action is to confirm a public agency’s legal authority to undertake a proposed financing before that financing occurs.”

Dan Whaley, a business owner in the town of Hood and a member of the nonprofit Delta Legacy Communities, says there is a big difference between the 40-year-old Burns-Porter Act and the proposed Delta tunnel—namely that the public voted for the State Water Project, but has never had the chance to vote on either Jerry Brown’s or Newsom’s tunnel plan. However, voters did reject an earlier version of the conveyance system called the peripheral canal in 1982. Two years ago, Californians also voted down a $8.9 billion water bond, Proposition 3.

Whaley said voters should have their voices heard on the tunnel before any bonds are issued, especially since the state faces a huge budget deficit as tax revenues plunge during the COVID-19 pandemic.

“We’re shocked,” he said. “The light is finally going on in peoples’ heads that they are rushing forward with a project that hasn’t even gotten a state Environmental Review Act report yet. In a time when there’s no government money for schools, they’ve got 50 engineers working full-time on this in downtown Sacramento—on a project that frankly may never go, and should never go from an environmental standpoint.”

The National Resources Defense Council is also skeptical that Weed’s arguments based on the Burns-Porter Act will win in court.

“There have been a lot of changes to the law and changes to the facts on the ground since the 1960s that really do compel a different approach,” Obegi said. “When the State Water Project was first constructed, you did not have anything like the environmental legal framework that we have today.”

Another potential problem facing DWR’s validation suit could be its claim that 29 water contractors will cover the tunnel’s final cost: The suit lists at least four water contractors that have already sent a letter to Newsom stating they no longer intend to pay or participate, citing the long-term financial burdens on ratepayers from the COVID-19 recession. A Public Records Act request filed in August also revealed that only 10 of the 29 water contractors identified as funders in the suit have been making any payments to DWR to support the tunnel.

Nicky Suard, owner of Snug Harbor Resorts in the Delta, has been on the front lines of trying to block the tunnel project for years. She views the seeming contradictions within DWR’s lawsuit as part of a broader pattern.

“DWR’s current filing against all citizens of California is obnoxious,” Suard said. “I think it shows that the leadership of DWR—Karla Nemeth, specifically—could not care less about the impacts to everyone in the Sacramento River watershed as they plow ahead using taxpayer dollars to sue the taxpayer. It’s DWR dirty tricks, as usual.”