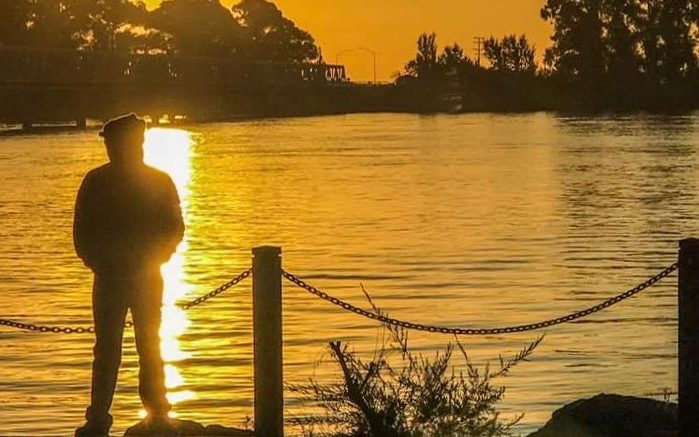 A man watches sun set on the south Delta. (Photo by Gregory Mitchell)

The Southern Sea Otter has been fighting for its survival along California’s coast for 40 years. First imperiled by reckless oil spills, these furry, 50-pound mammals have remained threatened under the Endangered Species Act even as technology to prevent and clean up oil slicks has greatly improved.

Now, an extensive study by UC Davis appears to show why: Many sea otters are developing fatal heart disease from chronic exposure to harmful algal blooms caused by a combination of algae overgrowth and unusually warm water. Such blooms have been spotted lately with unusual and disquieting frequency in the Delta. While it’s long been known that direct exposure to harmful algal blooms, or HABs, can cause gastrointestinal and respiratory problems in animals and humans, the UC Davis investigation is a rare look into how long-term environmental exposure can affect a species in deadly ways.

For Delta communities and coastal towns from Lobitos to Santa Barbara, the study is raising the question of whether—in an era of climate change—the Southern Sea Otter is actually the canary in the coal mine.

The UC Davis study focused on the kind of toxic algal blooms that contain some level of domoic acid and are found in salt and brackish water. That means that while the HABs observed last summer in the south Delta may be similar, the toxic blooms that accumulated in the more inland, freshwater parts of the estuary—including Disappointment Slough and the Port of Stockton—likely had a different chemical makeup. HABs with or without domoic acid, however, pose a serious health risk to pets, people and especially children.

The new study was carried out by the UC Davis EpiCenter for Disease Dynamics at the School of Veterinary Medicine’s One Health Institute. It took place over the course of 16 years and focused on the life history of 186 radio-tagged Southern Sea Otters. Their habitat covers the coastline from just south of San Francisco to the Santa Barbara region.

“We were able follow animals over a pretty long period of time,” said lead researcher Megan Moriarty, a wildlife epidemiologist.

The study found that otters chronically exposed to high levels of domoic acid in HABs had a 1.7-fold higher risk of dying from heart disease.

“It can cause changes to their central nervous systems, for example, the brain, and they can have seizures and tremors,” Moriarty said. “But it can also really impact the heart and blood vessels, which was the focus of our study.”

The study also found that the sea otters’ long-term exposure to HABs was mainly through the food they ate. Those at higher risk of fatal heart disease primarily consumed crab and clam, which appear to accumulate far higher amounts of domoic acid from their proximity to toxic blooms.

Even more jarring, the sea otters most impacted by the health threat were those of prime reproductive age, about four years old.

“This is definitely concerning because the population growth is really determined by the survival of prime age adults, especially females,” Moriarty noted. “So, if they are dying prematurely, that can really their ability to recover.”

Danger in the Delta

California has a task force assigned monitoring HABs with domoic acid, particularly those that could contaminate coastal fisheries. The need for such vigilance has been known since at least 1987, when 145 people on Prince Edward Island in Canada became extremely sick after eating blue mussels harvested near a toxic algal bloom. According to a report from the California Ocean Science Trust, 19 were hospitalized, with 16 going into intensive care and three elderly individuals dying.

The state’s fisheries and shell fish harvests are regularly tested for domoic acid levels. In 2015, a massive algal bloom event caused the closing of California fisheries from Crescent City to Morro Bay. The closures wreaked economic havoc on companies and towns that rely on the commercial Dungeness crab season and recreational razor clam season. They also brought a heightened awareness to the growing severity of HABs, which are predicted to become more common as temperatures on the West Coast rise in the coming decades.

The Delta’s southern communities—which include the towns of Byron, Oakley, Bethel Island and Antioch—have water with varying levels of salinity. One of them—Discovery Bay—dealt with concerning HABs last summer. The more freshwater sections of the tidal estuary, particularly sloughs and inlets between Isleton and Stockton, had even more extensive toxic algal blooms during 2020. That caused environmental groups including the Sierra Club and Restore the Delta to be critical of Gov. Gavin Newsom’s revised plan for water security that was unveiled last July.

The plan relies heavily on the controversial Sites Reservoir proposal and the highly embattled Delta tunnel proposal, both of which would reduce fresh water flows in the Delta and make it more at-risk for toxic algal blooms.

Studies by the federal Centers for Disease Control and Prevention have suggested that HABs don’t just harm those swimming and fishing in them, but also anyone close enough to breathe in the wind-blown aerosols from the blooms. That revelation has caused particular concern for residents of downtown Stockton after large HABs stagnated all along its port last August.

Moriarty said that dangerous HABs, whether they have domoic acid or not, present a challenge that is not going away.

“Across the world, harmful algal blooms are becoming more common,” she said. “This is actually becoming a pervasive issue.”

Be the first to comment on "As toxic algae worsens in Delta, new study shows alarming impact on sea otters"