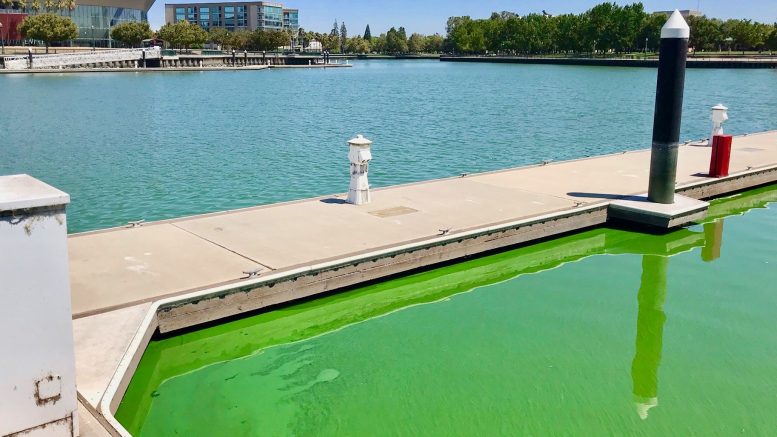 At the end of July, Gov. Gavin Newsom released his revised plan for bringing long-term water security to all Californians. But his announcement was overshadowed by San Joaquin County and several Delta communities scrambling to confront the worst cases of toxic algae blooms ever seen on local sloughs and rivers.

These green, floating slicks brought a new level of criticism to Newsom’s agribusiness-friendly water proposal. That’s because the governor’s strategy relies in large part on the controversial Sites Reservoir proposal and the even more contentious Delta tunnel proposal. Conservation groups say both projects—particularly the tunnel—could worsen the problem of dangerous algae contamination in regional waterways.

Meanwhile, the state continues to spend large sums of money on both multibillion-dollar projects with little clarity on who will ultimately foot the bill as the COVID-19 pandemic drains evermore revenue from public agencies.

On the last day of July, a man wandered through the scorching heat along Stockton’s waterfront. He paused to look at the thin layer of neon-lime sludge lapping against its dock. Leaning down for a whiff, he suddenly pulled back in revulsion and confirmed, “This water’s so bad now it’s been all over the news!”

The part of the San Joaquin River flowing into McLeod Lake in the heart of downtown Stockton is now the region’s epicenter for toxic algae. The blooms, also called Harmful Algal Blooms or HABs, can cause serious gastrointestinal and respiratory problems in humans, especially in children. Exposure to toxic algae has also been linked to fatal liver disease. A study in the journal Toxins also determined the blooms are particularly deadly to dogs swimming in contaminated water.

According to the Center for Earth and Environmental Science at Indiana University, the toxic blooms are caused by a combination of algae overgrowth coupled with unusually warm water and low water flow.

The threat is not limited to Stockton’s waterfront. Toxic algal blooms have also been documented in the north Delta’s Disappointment Slough, some 20 miles east of Isleton, and in the South Delta’s waterside community of Discovery Bay. There have also been unconfirmed sightings in other sloughs and marshes.

Bill Wells, executive director of the California Delta Chambers & Visitor’s Bureau, says that all reports indicate the problem is worse and more widespread than in previous years.

“I don’t think boats are really wanting to come into downtown Stockton or McLeod Lake right now, and the problem seems to be extending down the river, too, and I’ve never seen that before,” Wells said. “If this gets any worse, the business impact would be huge. Boating is a three-quarter of a billion-dollar industry in California, and a lot of that is focused in the Delta.”

“People are not going to want to go in the water where it is, because they’re afraid they’re going to be killed,” he added. “And the boats are afraid to pull in to those areas because if the algae gets into the cooling system, it will get sucked through the motors and back out, and the algae will clog up motors.”

“This will drive people right out of the Delta.”

Adam Laputz, assistant executive officer of the Central Valley-Regional Water Quality Control Board, recently acknowledged to reporters that the blooms had brought “reasonably high levels of toxins in the waterways.”

Not everyone is surprised about how dire the situation is.

The nonprofit advocacy group Restore the Delta had been warning state officials that warming trends, coupled with a lack enforcement on agricultural discharges, could cause the floating toxins to get out of control. Given that the main method of combating such blooms is fresher and cooler water flowing through the Delta, environmental advocates were surprised by Newsom’s new vision for California. They claim it’s not new at all, but rather a carryover of former Gov. Jerry Brown’s stalled and embattled objectives to get more water to thirsty Southern California.

“The whole system is being managed for water exports rather than protection of the estuary,” said Barbara Barrigan-Parrilla, executive director of Restore the Delta. “When it comes to the algal blooms, the state is failing on multiple fronts. They are not doing proper enforcement on pesticide discharge, and the Newsom administration has entered into voluntary agreements with the water contractors that are regulating flows to a greater degree.”

“We don’t have enough flow in the warm months as it is right now,” she added. “We’re watching these [algal blooms] get larger, and if they don’t deal with it, I think ten years from now we could have some very serious threats to our complete water system.”

One specific flaw Restore the Delta and the Sierra Club see in Newsom’s plan involves its reliance on the proposed Sites Reservoir in the west Sacramento Valley. Conservationists argue that Sites’ location and design will cause it to channel mostly warm water chalked with naturally occurring heavy metals into the pristine Sacramento River and north Delta, creating the opposite type of flow that’s needed to counteract toxic algal blooms.

Of even greater concern to environmental groups is how Newsom’s plan has made the proposed Delta Tunnel one of its cornerstones. The tunnel is by its very nature a massive conveyance system designed to take large quantities of fresh water out of the north Delta and move it to Central and Southern California water contractors.

“When it comes to the algal blooms, the state is failing on multiple fronts.”

A myriad of legal battles have already been fought over whether a Delta conveyance system will destroy farming and collapse local economies from Sacramento to Contra Costa counties, as well as drive some fish populations to extinction.

Now, the emerging threat of toxic algal blooms, which are predicted to get worse with climate change, has added another layer of controversy to the project.

For his part, Newsom insists that the overall plan, which consists of some 142 separate state actions, is a far-reaching effort to handle droughts, rising temperatures, declining fish populations and the state’s overreliance on groundwater.

“Water is the lifeblood of our state, sustaining communities, wildlife and our economy,” the governor said in a statement. “For more than a year, my administration has worked to assemble a blueprint to secure this vital and limited resource into the future in a way that builds climate resilience for all communities and sustains native fish and the habitat they need to thrive.”

Restore the Delta maintains that the Newsom administration and the state Department of Water Resources should be making Delta levee repairs and clean, safe water quality their top priorities.

“Those are the two most important things to saving the Delta, and saving our water supply, not a tunnel,” Barrigan-Parrilla said. “Nothing has changed with the state’s approach, but the problem is that the stakes are now getting way too high.”

In June, Gary Kremen, vice chairman of the Delta Conveyance Finance Authority—an agency tasked with getting the tunnel built—wrote a guest commentary for CalMatters arguing that the project had a social justice benefit.

If a catastrophic earthquake were to harm the Delta’s levee system, Kremen argued, the resulting lack of water security would be borne on the backs of California’s poorest communities.

While Kremen’s assertions drew skepticism, those interested in his argument don’t have an easy way to compare the potential cost-benefit ratio of the Delta Tunnel with other interventions aimed at public health and social equity. That’s because the question of exactly who is paying the millions of dollars to plan the tunnel, as well as who will pay the billions needed to construct it, has only grown murkier as the COVID-19 pandemic has taken hold in California.

In June, state invoices obtained by SN&R revealed that Kathryn Mallon, the director charged with getting Delta tunnel through its approval process, was earning twice as much money as the governor, billing the state $47,000 every month, even as Newsom furloughed thousands of employees and slashed the state budget by $54 billion. DWR maintains that the cost of paying for Mallon, her staff and the authorities she runs—reportedly $101.6 million over the last year—will ultimately be reimbursed to California by the water contractors. According to a legal brief DWR filed in Superior Court on Aug. 6, it’s counting on 29 different water contractors to pay for the tunnel.

Yet four of those water contractors sent a letter to Newsom in mid-June making it clear that, in light of the COVID-19-related economic collapse, they wanted out of their agreement to fund the tunnel and Mallon’s agency. Nonetheless, DWR listed those contractors as funders when it went to court to confirm its ability to issue revenue bonds.

Now, a Public Records Act request filed by Delta boater Leland Frayseth has revealed that only 10 of the 29 water contractors DWR mentioned in its court brief have been making payments up until July toward the state’s growing tunnel-related expenses.

Meanwhile, documents indicate the planning process for the other jewel in Newsom’s water plan, the $5.2 billion Sites Reservoir, have also been lucrative for management consultants. In late March, the Sites Project Authority announced that former Contra Costa Water District general manager Jerry Brown would be its new executive director. Invoices to the authority show that Brown’s consulting firm Waterology has billed it $67,500 for work just in May and June.

Sierra Club California has said that such costly projects as the Delta tunnel and Sites Reservoir move the state’s water future in the wrong direction, while also harming the environment. For the group’s director, Kathryn Phillips, the toxic algal blooms are that latest, most urgent sign.

“Given that the blooms are becoming worse and worse, they’re no longer the canary in the coal mine – the damage has been done,” Phillips said. “The last thing you want to do is take more fresh water out of the system, but unfortunately that’s exactly what is happening.”

That could have long-term implications for all Stockton residents. According to the federal Centers for Disease Control and Prevention, the harmful algal blooms don’t just threaten those swimming and fishing. Anyone near the water could breathe in toxins from wind-blown aerosols under certain conditions. For Phillips, that possibility raises a far more direct social justice question than the one Kremen wrote about.

“The Delta legacy towns aren’t just those towns that tourists see, it’s Stockton, a big area with lot of people, and it deserves better treatment than what it’s getting now,” Phillips said. “And the best answer this administration can come up with is an answer that will destroy the Delta, all while this administration claims to care about environmental justice. They say that, yet they’re promoting a project that is the antithesis of environmental justice.”

“Given that the blooms are becoming worse and worse, they’re no longer the canary in the coal mine – the damage has been done.”