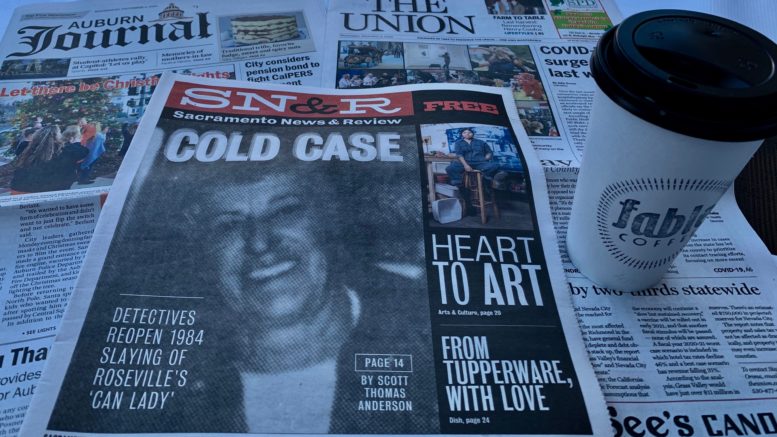 Can a bill before Congress keep communities from falling into the dark?

“If newspapers die, the crooks won’t cry,” Miami Herald columnist Leonard Pitts Jr. once said about the collapse of American print journalism. Those stakes are only coming into sharper focus as the COVID-19 pandemic has blown huge holes in newspaper ad revenue, forcing more than 275 news companies and papers to cut pay, furlough and lay off workers or shutter their doors altogether, according to a report by the Poynter Institute.

As the slow-bleeding wounds turn into uncontrollable hemorrhaging, towns and cities across the nation aren’t just losing watchdogs on local governments, but also professionals dedicated to sharing and chronicling the places, personalities and special moments that are the heartbeat of a community.

Now, the backers of a proposed bill in Congress are arguing that the loss of newspapers will damage America’s democracy and further fray its civic life. The Local Journalism Sustainability Act is aimed preventing that fate by bringing relief to newsrooms, but in a way that doesn’t compromise press freedom.

As the bill gains steam on Capitol Hill, newspapers in the Sacramento region are finding strategies to serve their communities through the COVID-19 crisis while trying to survive.

First unveiled in July, the Local Journalism Sustainability Act was introduced by Reps. Ann Kirkpatrick, an Arizona Democrat, and Dan Newhouse, a Washington Republican. House Resolution 7640 would give newspapers tax credits of as much as $50,000 a year to pay each journalist on staff.

It would also provide up to $250 a year in tax credits to any American who subscribes to a local newspaper, while giving small businesses tax credits of $5,000 the first year and as much as $2,500 in the next four years to advertise in newspapers.  Finally, the act creates new avenues for newspapers that have been bought by private equity firms and hedge funds to be “re-seeded” in their communities with local ownership.

Under the bill, the vast majority of local newspapers and alternative weeklies would qualify for assistance.

Supporters include the trade associations News Media Alliance and America’s Newspapers, as well as Editor & Publisher magazine. The act has also found an unexpected champion in former Democratic presidential candidate Andrew Yang, who says that while traveling the nation during his 2020 campaign, he came to understand that newspapers are vital to keep corruption out of local politics and to protect American ideals.

“A colleague who was a city councilman told me that they ran city council meetings, and a reporter would show up, and then the newspaper ran out of money and the reporter no longer was there. And he said all of the sudden things became very different, not ‘good’ different—sort of sloppy and unprofessional and kind of corrupt, different,” Yang told Elizabeth Green, co-founder of the American Journalism Project, on the Nov. 12 episode of his highly rated podcast “Yang Speaks.”

“The pandemic has made all this much, much more pressing and worse, and I don’t even think we know the full-scale damage to local journalism that’s happening, though we all have an instinct that a lot of those local papers are dying even faster right now.”

Green agreed and pointed out that 2,000 newspapers have closed across the nation since 2004.

While the bill’s opponents say a government bailout would make journalists dependent on politicians they are covering, supporters argue it has built-in safeguards because the financial aid would flow through decisions made by independent businesses and everyday Americans.

Yang urged voters to contact their representatives and tell them to support the bill. “We need to do this, because you’re seeing private propaganda fill the gap, so having a nonprofit or public-funding model to me, makes sense,” he said. “Or it ends in tears, it ends in an information wasteland—and propagandists will fill that.”

From hard times to impossible times

There’s no question times are tough for newsrooms, including in Northern California.

The 160-year-old Amador Ledger Dispatch has gone from 16 employees to six this year. Publisher Jack Mitchell, who has worked for newspapers in four states over the last 29 years, says the trend of corporate chains buying up family-owned community papers in the 1990s and treating them like ATM machines left the entire industry unprepared for the transition from print to digital media, let alone a challenge like COVID-19.

“The magic number they were shooting for back in the day was for a newspaper to have 30% profitability,” Mitchell recalled. “If you look at grocery stores, they run on 2 or 3% profitability. So newspapers were these money machines at one point, and that’s why so many locally owned papers disappeared as the corporate chains swooped in to buy them … Now, newsrooms across the country have been decimated. When you go visit them, it’s like walking through ghost towns—just massive buildings where there’s 40 cubicles and three people in a room. It’s insane.”

Bill Sullivan, associate publisher of Gold Country Media Group, which owns newspapers in Folsom, Roseville, Rocklin, Auburn and Lincoln, said that the region’s bars, restaurants and entertainment venues are some of his company’s most loyal advertisers, but they have been battered by the COVID-19 lockdowns. Some have closed forever. “The impact on our advertisers have been drastic,” Sullivan said.

A key example, he said, is the Harris Center for the Arts in Folsom, which advertised its shows in all the Gold Country papers. It went dark in April, and in June it announced it will stay closed through at least next July.

“With the restaurants, they need to advertise during these times, but a lot of them simply can’t because they’re on a shoestring budget and if it comes down to keeping an employee versus marketing, they’ve got to make that decision,” Sullivan said.

Falling revenues prompted the company to make its own hard choices. Sullivan said it slashed its freelance budget to near zero and reassigned staff to make up that difference, all in an effort to avoid staff layoffs.

“We’ve been tightening anywhere and everywhere we can without sacrificing people,” he said.

Gold Country’s newspapers and the Ledger Dispatch have been doing their part to support readers during the pandemic. Reporters in Folsom and Placer County have been trying to balance COVID-19 headlines with uplifting features to bolster community morale. The Ledger Dispatch is coordinating a large “shop local” campaign to support small businesses in Amador, which will culminate with one customer winning $10,000.

“Everyone is just trying to come up with ways to lean-up these businesses that are just getting killed right now,” Mitchell said.

Sacramento News & Review and The Sacramento Bee have also struggled throughout the pandemic. While both have published numerous stories to keep the capital region informed about the spread and impacts of the virus, both have faced company upheavals. In February, The Bee’s parent company declared bankruptcy and in July McClatchy was sold to Chatham Asset Management, a hedge fund. In September, The Bee announced it’s leaving its headquarters on Q Street and laying off nearly 200 print and production workers. That decision followed a years-long, dramatic downsizing of The Bee’s newsroom.

Many SN&R advertisers also went over a financial cliff during the pandemic lockdowns, forcing the paper to suspend print publication in March and shift its reporting online. With the help of a federal loan and reader donations, SN&R resumed print publication on a monthly basis in July. SN&R President and CEO Jeff vonKaenel said that the reader support continues to play a vital role in keeping the paper going.

“We thought things would be back after the summer, but this new shutdown has obliterated any chance of getting ads, because you can’t sell an ad for an event that’s not happening,” vonKaenel said. “We’ve been so appreciative of how many readers have stepped up and donated to our Independent Journalism Fund, which has helped a lot.”

As of late November, the Local Journalism Sustainability Act had 78 co-sponsors, 20 Republicans and 58 Democrats, including nine from California, though none from the Sacramento region.

Yang said the growing Republican support shows how many community newspapers have been lost across swaths of rural America.

“There was a report recently that 50% of ad revenue now is going to digital, and pretty much all of that money is going to Google and Facebook, which means the content newspapers are creating is not getting supported,” vonKaenel said. “At this rate, we’re going to have content deserts all over the country. This act will go a long way in helping avoid that.”

Sullivan said the bill could send a powerful message. “To specifically give a business what’s essentially a grant for advertising is not only good for that business, it would raise awareness with them and the broader public of how important their newspaper is,” he noted. “It think it would open more eyes to this idea that we’re here. It’s a win for the businesses, a win for the papers and a win for reminding people in the community that we’re looking out for them.”

From Mitchell’s perspective, time is of the essence.

“If we’re talking small, locally owned papers, any help they can get right now, they’re going to need it,” he said. “Many of them don’t’ have deep pockets to weather what’s going on; and, unfortunately, I think we’re going to see many of them fall. A lot of them already have fallen.”

Be the first to comment on "Local news on life support"