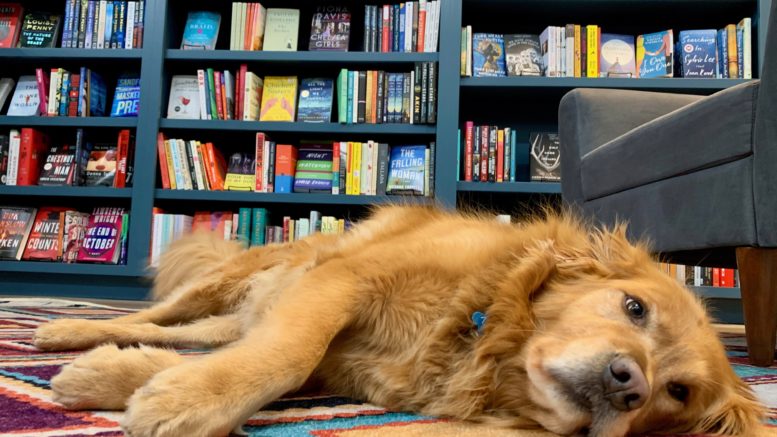 Ruby, the namesake and mascot of Ruby’s Books in Folsom, prepares for a nap as customers shop around her. (Photo by Scott Thomas Anderson)

In recent years, a deluge of journalism has implicated Amazon.com in widespread price-fixing, ducking taxes, forcing small businesses to surrender profits and grossly mistreating warehouse employees across the world to the point of a worker injury rate double the national average and at least six deaths between November 2018 and April 2019.

Now, the COVID-19 pandemic—the lockdowns compelling mom-and-pop storefronts to close amid the health threat from shopping in person—is leading Amazon to make record profits; the online giant reported more than $14 billion through just the first three quarters of 2020. In May, one business consulting firm predicted that Amazon founder Jeff Bezos will become the world’s first trillionaire.

But for consumers who may be feeling a moral albatross around their necks when clicking the Amazon buy button, there is a new alternative, at least in the very first industry that Amazon sought to crush 26 years ago—independent bookstores. As stay-at-home orders continue to ravage small businesses, some Sacramento booksellers say that Bookshop.org couldn’t have arrived at a better moment.

Bookshop.org was founded in January by Andy Hunter, the publisher of Lit Hub.  The site brings together a collection of independent bookstores, each with its own virtual storefront. It offers selection, pricing, ordering convenience and a delivery system that competes with Amazon.

When customers make a purchase, they can tell Bookshop which independent bookstore will receive the full profit from that order; or can opt to contribute to an earnings pool split evenly between all participating stores. Generally, a customer picks a specific bookstore’s virtual space to browse the entire site’s offerings from. Bookshop will tell that customer the exact dollar amount from each order that’s going directly to the selected store.

“By design, we give away over 75% of our profit margin to stores, publications, authors and others who make up the thriving, inspirational culture around books,” the company’s mission statement reads. “We hope that Bookshop can help strengthen the fragile ecosystem and margins around bookselling and keep local bookstores an integral part of our culture and communities.”

So far, seven independent booksellers in the Sacramento region have joined Bookshop. One is Beers Books, a longtime favorite in Sacramento’s Southside Park neighborhood.

“It was so easy to join,” said Andy Naify, whose family has run Beers for three decades. “All we really had to do to get signed up was send them proof of our American Booksellers Association membership … It’s really nice because they’re giving us a pretty fair cut of the sales, and it’s also helping with our special-order load, which we’ve been swamped with lately.”

In-person browsing at Beers is currently limited to 10 masked shoppers at a time. While it’s nice for Naify and his team to see literature fans in person again—last spring the store was only processing mail orders—Bookshop is offering longtime customers the option of supporting it from their homes, which is particularly helpful to those in high-risk health categories. And this generally doesn’t mean paying noticeably higher prices.

Naify has been happy with the service so far. “It’s a passive revenue stream for us, and people are happy to fight against the big chains when possible,” he said. “We’re just grateful to still be here, for all of the support we’ve been getting. And at the end of the day, we’re thankful to Bookshop for helping us focus on the business while making things easier for our customers, too.”

“People are happy to fight against the big chains when possible…we’re thankful to Bookshop for helping us focus on the business while making things easier for our customers, too.”

Stacy Gould has been utilizing Bookshop for her Folsom store, Ruby’s Books, almost since the project started. Gould, who’s new to the book business, signed a lease for one of Sutter Street’s historic storefronts last February, just weeks before the pandemic took hold. She and her husband quickly realized they were in for an interesting launch.

“We never hesitated too much, because we thought we’re going to be in this for the long run. We want to be here for decades, and we think a bookstore is a great fit for Folsom,” Gould recalled. “There’s even been a few things about COVID that I think really helped us, especially the renewed focus on shopping local, which has been fabulous. Because of COVID, people have realized they need to support small businesses.”

Gould named the bookstore after her golden retriever, Ruby, who can be found lounging around almost every day and who quickly became a Folsom celebrity among children and dog-lovers. Mask-wearing and social distancing hasn’t dampened Ruby’s enjoyment of the attention, including having her belly scratched as kids eagerly read books to her.

Gould heard about Bookshop from the ABA the very month her doors opened. Ruby’s was the 203rd store in the U.S. to join Bookshop.

“Right away it seemed like a great idea to me,” Gould said. “Their customer support to booksellers is amazing. I think they’ve done a good job of making this for brick-and-mortar bookstores …  I’ve been so excited about how successful they’ve been this year. They’ve said they’re doing in more in sales then they thought they would; and the fact that I can make 30% on a sale just by sending my customers to a website, and giving them an alternative to Amazon, because a lot of the are looking for that alternative, is so helpful to us.”

The Avid Reader in Davis, Capital Books in Sacramento, A Seat at the Table Books in Elk Grove and LightWeavers Metaphysical Boutique in Citrus Heights have also created virtual storefronts on Bookshop.

“Because of COVID, people have realized they need to support small businesses.”

One person who was surprised to find himself joining up was Glen Sewell, owner of Winston Smith Books in Auburn. Sewell had held off on getting his store involved in any online ordering for the first four years that he owned it. That’s because Winston Smith has a spacious, transporting atmosphere and highly eclectic assortment of books, and Sewell worried an online option would compete with the in-store experience of serendipity and discovery. But when the state forced Sewell to close his doors for six weeks last spring, he decided his philosophy needed to change.

After researching his options, he made Winston Smith Books part of the Bookshop consortium. He hasn’t regretted it.

“The pandemic forced me into it, but it does have some advantages,” Sewell said. “I can’t stock everything, so when a customer can’t find something that they’re looking for here, I tell them to just order it on Bookshop and make sure they find this store as they do it, and they’ll be supporting us.”

Sewell added that COVID-19 recession is still very real—and so is the need for support.

“We’ve been open again for a while, but the biggest problem is people aren’t coming in like they used to,” he said. “Right now, there’s a stay-at-home order, and that’s what people are doing—they’re staying home. Bookshop has given us a nice little supplemental income, and any little bit helps to survive these days.”.

Be the first to comment on "As Amazon nets pandemic windfall, Sac’s indie bookstores get a new weapon to compete"