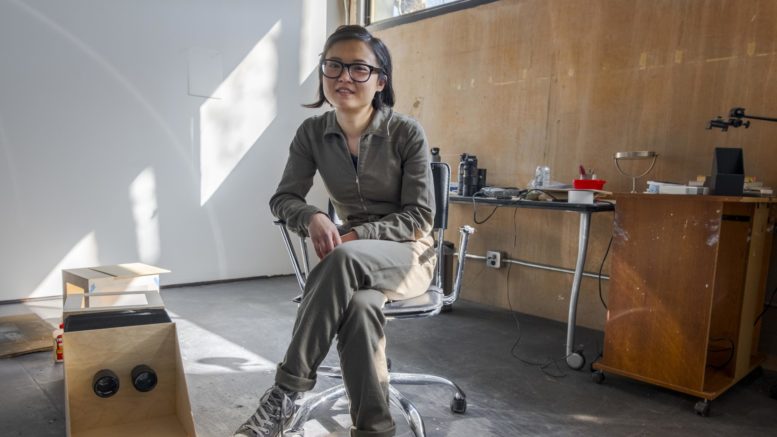 Muzi Li Rowe is one of two new artists selected for the Ali Youseffi Project's residency program at Verge Center for the Arts. (Photo by Patrick Hyun Wilson)

Chosen from about 70 applicants, they will spend the upcoming months working on projects that eventually will be featured in an exhibition at Verge Center.

Ladi Youssefi founded the project in September 2019 after donations poured in following the death of her brother Ali Youssefi, a Sacramento developer and arts supporter.

“I’m glad that AYP can continue to give direct support to artists during this time. Now, more than ever, we need to invest in the creatives of our community,” Youssefi said.

The coronavirus pandemic, which has forced arts groups to cancel exhibitions and performances, has destabilized funding for the project. While it received a Creative Economy grant from the Sacramento Metropolitan Arts Commission for 2020, it did not cover the full cost, Youssefi said.

“Our plan was to begin our fundraising efforts in March to raise money to continue the residency program through the year,” she said. “Those efforts are put on hold due to the current circumstances.”

Despite the program’s financial instability, Youssefi says that it will be funding Rowe and Pacheco for the duration of their residencies. Both artists were chosen for their commitment to their work—Rowe for her reworking of photographic technology, and Pacheco for his introspective examination of culture and family.

“Both Muzi and Vincent present their respective themes and mediums with exceptional detail and execution,” she said.

So, without further ado, let’s meet them:

Born in Beijing, China, Muzi Li Rowe lived in Australia and Hawaii before moving to California in 2015, when she was accepted to UC Davis to pursue a master’s of fine arts degree. It was there that Rowe began to build her own analog cameras.

“I found this old phone in my parents’ place and I just, kind of, out of boredom took it apart,” Rowe said. “I saw this little lens and I had an idea, ‘What if, I build a camera using the lens from a cell phone?’”

Did her first camera work?

“No it didn’t,” Rowe said. “I didn’t realize how small the focal length was, and there was a lot of technical difficulties, but I actually made it work two cameras later.”

For Rowe, process and concept are integral to her work. Her current projects focus on planned obsolescence and the rapid advancement of technology.

“When you look at a phone, a Nokia from 15 years ago, it appears to be almost ancient,” Rowe said. “And, in a way, my perception of time is sort of warped by the technological developments in the past couple of decades.”

Rowe combines digital technology and historical processes together into what she calls a “conceptual collage.”

One such conceptual collage is a camera made up of more than a dozen cell phone lenses on a small wooden board, which slides into a handmade film holder projecting multiple circular images onto a single sheet of film.

The resulting image, which Rowe brings up on her cell phone, is an abstract plane of images of almost identifiable things. But Rowe doesn’t care much for the picture.

“I prefer the object over the image,” Rowe said.

Cameras are tools for seeing in ways that humans cannot—like microscopy or cosmology—Rowe is interested in things that go beyond vision.

“It goes back to the way that technology mediates our consumption, from things we can see to things we cannot,” Rowe said. “Photography is able to provide that.”

“When you look at a phone, a Nokia from 15 years ago, it appears to be almost ancient. And, in a way, my perception of time is sort of warped by the technological developments in the past couple of decades.”

Her focus is on the way the image is created, and though she isn’t sure exactly what she will be making for her residency, she hasn’t stopped building image-making tools.

On her studio floor is her latest experiment: a large disassembled wooden box, which on one side has two projector lenses, creating a stereoscopic camera. On one of the lenses is a sticker that reads “$2.00.”

“I do have some ideas, some rough plans, but I guess, you know, things change and we’ll just see how things evolve,” Rowe said.

Since he was six-years old, Vincent Pacheco has always felt disconnected from his family. He was raised in South San Francisco after his father took him away from his family of “drug dealers, gang bangers and criminals” in San Francisco’s Mission District.

“There was always a stark, you know, separation between them and us,” Pacheco said. “My dad was trying to make a better life for me and my brothers.”

It was after joining his high school yearbook class that he discovered a love for creating, but he didn’t quite know what to call it back then.

“I loved the process of going out with my camera, taking photos, you know, incorporating copy into the layouts. And I was really good at it,” Pacheco said. “I was like, ‘Is this work? What is this?’”

Eventually his school counselor told him that what he was doing was called graphic design. Armed with that knowledge, Pacheco went on to become the first in his family to attend college.

However, he didn’t fully embrace what it meant to be an artist until after earning his master’s of fine arts degree from UC Davis, where he eventually began teaching as an adjunct design professor in fall 2017.

“I just naturally kind of moved into this role I guess,” Pacheco said. “It was all graphic design up until that point. Now, I’m starting to kind of embrace this path and what it means to be an artist.”

Pacheco spent years working in the corporate design world before abandoning it all and moving to Tahoe National Forest, where he could focus all of his attention on work that didn’t have a logo attached to it.

“I was making all this money in corporate America, but spiritually I wasn’t going anywhere. It was a dead end,” Pacheco said.

After moving from the city to a landscape full of bears and mountain lions, Pacheco started using art to process the new environment around him, making work such as Existential Crisis Level, an installation mimicking fire danger signs.

He spent five years on that work before moving on to his next project: Exploring the internal landscape of his family and his identity.

“I think, right now, I have a handle on where I’m at, you know, in the landscape around me,” Pacheco said. “Naturally, you know, once you solve that problem of, ‘OK, where am I?’ you kind of move on to, ‘OK, where do I come from?’”

He is focusing his recent project on the conflict surrounding his family’s lifestyle, and his own feelings of privilege having escaped that lifestyle.

“There was always that distance between what was going on in the Mission District with my family and that life of crime, generational life of crime, and then us who kind of escaped that world,” Pacheco said.

Scattered throughout Pacheco’s studio are giant bags of cannabis and pills, an enormous syringe, an oversized baseball cap, a boxy football jersey and, leaning against one wall, an oversized Glock that would act more like a cannon than a pistol. These larger-than-life objects are actually pinatas made of cardboard and tissue paper, which Pacheco created based on memories of his family.

“That’s my brother’s Glock nine-millimeter,” Pacheco said. “I see these pinatas as an entry point into Mexican culture.”

According to Pacheco, his personal reflections and introspective work are not meant for the art world to turn a profit. Instead, the work is valuable in its own sake.

“I don’t want a career in art-making,” Pacheco said. “I’m going to kind of keep this as its own thing. I’m not interested in selling anything, you know?”

Be the first to comment on "Setting up shop"