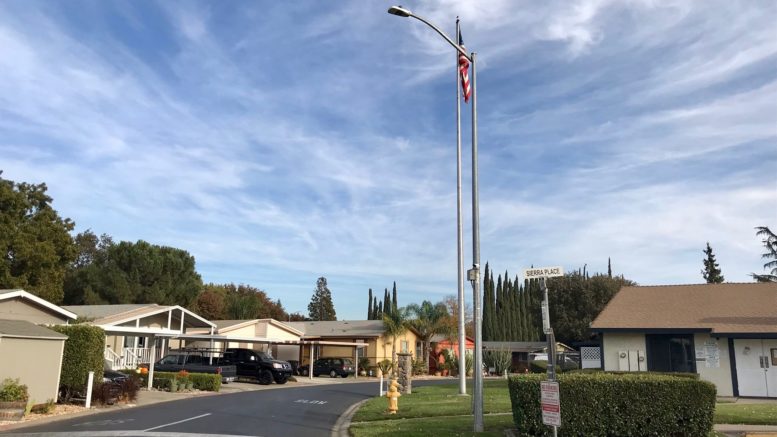 Notices for a mass eviction in West Sacramento’s Westwind Estates mobile home park went out at the end of October. (Photo by Scott Thomas Anderson)

On the day before Halloween, something akin to an eviction bomb went off in a modular home park in West Sacramento, one that threatens to displace many of its residents before New Year’s.

Stunned tenants of Westwind Estates lined up at its management office and demanded to know why they’d been handed 60-day notices to vacate. The more they investigated, the more their frustration focused on a state housing inspector who papered the park with code violations in the middle of the COVID-19 pandemic, then allegedly refused to communicate with residents about fixing those citations and used their failure as justification for moving to suspend the park’s operating permit.

That chain of events has now led to 65 families wondering if they’ll be driven from their homes during the holidays and forced to search for a place to stay during mass unemployment and growing homelessness in the region.

Gov. Gavin Newsom has described the pandemic as an unprecedented threat to health, safety and housing security. But for officials at the California Department of Housing and Community Development, the type of aggressive code enforcement that can cause people to lose their housing remains the order of the day.

The problems started on Feb. 12, when a department inspector conducted a health and safety check on Westwind Estates. On March 27, nearly two weeks after the governor issued his statewide stay-at-home order, that inspector sent 402 citations to residents of the park. Some citations were for the condition of awning poles or an extension cord running from a mobile home to a shed. Others were for yard trash or missing handrails along front steps. A number were for fire safety issues around outbuildings, which the residents dispute. The inspector also issued the park itself 212 violations.

Residents claim that the inspector did not tell them when he’d be back to check if the violations were addressed. They also say his voicemail was always full, leaving no way to contact him or leave messages. This meant they didn’t know if they had correctly handled their citations. Further complicating matters, residents found conflicting information about whether they needed county permits to make the repairs, and could not get the department to answer questions about that topic.

Residents also discovered that for some period in August, there was no management at the park to fix its violations, or to answer questions about the numerous code violations given to residents over wiring going into their PG&E meters.

On Oct. 6, the department gave Westwind Estate’s ownership a notice of intent to suspend its operating permit at the start of November, saying that the park still had 12 outstanding violations and that 95 residents hadn’t fixed violations.

On Oct. 30, without warning, Westwind Estates issued eviction notices to at least 65 of those residents, according to the park’s tenant advocacy group.

No one to call, no one to help

Within a day of the mass eviction, residents organized a town hall meeting on Zoom that was attended by West Sacramento City Councilwoman Martha Guerrero and Roger Johnson, chairperson of the Sacramento Area Coalition of Mobile and Manufactured Homeowners Associations.

The meeting was moderated by resident Forrest Gardens, who told his neighbors that the permit suspension would cost the park’s owners $115,000 a month for the foreseeable future.

“For their permit to be shut off, they’re losing a boat load of money,” Gardens explained. “They can’t legally collect rent … It’s full-stop, akin to a bar having its liquor license suspended.”

Liz Harrison, who has lived in the park since it opened in 1987, is on a fixed income and is now evicted. She was cited for a fire safety issue with her shed. But Harrison said she had fire-proofed the structure and she couldn’t get through to the inspector to discuss it with him.

“I needed to have someone tell me, ‘Yes, you need to move it,’ or whether I needed to get a new shed,” Harrison said. “No one ever got back to me. I figured everything was OK and I didn’t have to worry about it. Then I get a 60-day notice. What the heck! I’ve been here forever and paid my rent faithfully for 32 years.”

Resident Johnny Torres told the group he got a citation for how the park’s electrical wires ran into this PG&E meter.

“That’s not my department, that’s the park’s department to fix that,” Torres said. “I find it B.S. that I’m getting written up and a 60-day notice for this issue.”

A resident who identified herself as Bernice was also given a citation for her shed. Not only could Bernice not get a call back from the inspector to answer questions, the pandemic was making it difficult to find a repairman.

“I put money into trying to fix my shed,” said Bernese, a college student and massage therapist, “but I’ve never been able to get a response from anyone as to what else I can do to keep my shed, because I don’t have any other storage. And also, during these times, I don’t have income as a student to be fixing these things. And finding some to help because of COVID? A lot of people stopped working.”

For those attending the meeting, perhaps the most confusing moment came with the news that the inspector had issued a citation for yard maintenance to Stephon Hampton. Park management taped notices to his door, but Hampton is blind. His sister said the park’s management is supposed to make sure that any citations are sent to a trust overseeing Hampton’s affairs, but that did not happen.

“I can’t see how this practice can go on at this residential location or any other,” the councilwoman said. “To treat residents this way is horrible … We don’t have a lot of time to address these things and we’ll need some legal advocacy. This blindsided everyone with the threat of losing their homes.”

Alicia Murillo, a department communications analyst, told SN&R that it is not responsible for the mass eviction at Westwind Estates.

The permit suspension “does not force evictions as we don’t have that authority but only to enforce the Health and Safety Code,” Murillo wrote in an email. “Evictions are civil proceedings.”

Asked whether the level of enforcement at Westwind Estates ran counter to the governor’s messaging on the COVID-19 pandemic—or was appropriate considering how many residents may have lost their jobs and have no money to make repairs—Murillo declined to answer.

She did say that the department recently upgraded its voicemail system and hired additional staff to assist with questions on inspections and violations.

Westwind Estate’s management could not be reached for comment by SN&R or West Sacramento city officials.

Guerrero said this week she still hasn’t been able to get contact its ownership. She  was at the park Thursday during another inspection to determine if the operating permit would be suspended. During that inspection, the councilwoman said, a number of residents were able to get simple violations over handrail problems and outside debris signed off. Those residents should be taken off the eviction list, Guerrero said, but it’s unclear how many tenants still face eviction.

“We’re going to try to do whatever we can to straighten this thing out,” she said.

Be the first to comment on "Tenants say incompetence, indifference triggered mass eviction in West Sacramento"