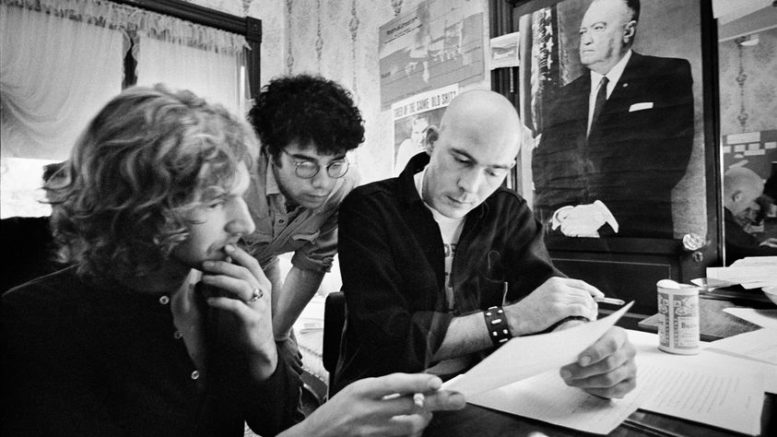 Directors of ‘Freak Power: the Ballot or the Bomb’ discuss bikers, provocateurs and visionary politics

Beginning in 1965, an obscure Bay Area reporter embedded himself with the Hells Angels Motorcycle Club, revving his Harley engine alongside members from Oakland, San Francisco and, at times, Sacramento. Two years later, Hunter S. Thompson’s flashy literary journalism put him on the map—and on the wrong side of the Hells Angels.

Not coincidently, Thompson moved his family from San Francisco to a remote town in rural Colorado, far from the enemies he’d made in the Golden State. A new documentary based on recently unearthed film from that time explores what Thompson did next. It was a move no one expected.

The film Freak Power: the Ballot or the Bomb dives into Thompson’s bid for public office and how it quickly morphed from a stunt to a viable campaign, one that shook Aspen’s old power structure to its core. It also shows how Thompson’s days of tearing his chopper across the highways and byways of Northern California came back to haunt him during the race.

A new kind of sheriff?

In 1969, Thompson ran a political campaign for Joe Edwards, a renegade lawyer who’d sued the city of Aspen over police conduct before running to become its mayor. In a development that shocked many, Edwards only lost by a handful of votes. The following year, Thompson decided to run for sheriff of the county that Aspen is the seat of. His opponent, incumbent Carol Whitmire, was the archetypal ultra-traditionalist good old boy that one often associates with a western sheriff in the 1960s. Whitmire had a particular distain for hippies, outcasts and free-thinkers who were living in his jurisdiction. Thompson famously started the campaign by shaving his head completely bald in order to refer to Whitmire as “my long-haired opponent.”

During that political season, Travis and Robert Fulton filmed many of Thompson’s campaign events and strategy sessions, especially as drama in the county came to a head. That footage was thought to have been lost after Robert, a Harvard film professor and pilot, died in a plane crash. In 2017, some of Robert’s film was rediscovered in a barn, leading to even more being located in a basement in Connecticut. When Watkins started reviewing the footage, he knew it was a treasure trove of insights into one of the more shrouded episodes of Thompson’s mythic career.

Watkins tapped the editor of his book, journalist and artist Ajax Phillips, to be his co-director for an ambitious documentary about the Pitkin County Sheriff’s race. The directors coupled the 1970 footage with fresh interviews from those who’d worked on Thompson’s campaign. Sound engineer Craig Mann, known for his work on the movie Whiplash, and composer Gustavo Santaolalla, whose film scores include Brokeback Mountain and Babel, joined the effort. Together, the team created an emotionally intense, consistently thought-provoking and thoroughly watchable film. It’s currently streaming on Amazon, Apple TV and Vimeo.

Viewers follow Thompson’s evolution from a writer drumming up some political theater to a realistic option in the eyes of many Pitkin County voters. The documentary proves Thompson was formidable in a public debate. His campaign was also registering hundreds of new, young voters. Thompson, who’d witnessed the violent riots and police beatings outside the Democratic National Convention in Chicago in 1968, spoke directly about the cost of growing civil unrest in nation. That may be one of the most searing moments for an audience in 2020.

“We’ve come to a point where the nation is completely shattered and we’re heading for a generation—50 years of chaos and rubble—and maybe the end, unless we figure out some way to live in a peaceful, tolerant situation with people who don’t agree with each other,” Thompson says in the film. “Or we can’t live … Aspen has been a hide out from reality for so long. It takes a while for the national political reality to catch up here. I don’t think we have a situation here where we can afford to ignore the national political reality any longer.”

Sheriff Whitmire had little interest in discussing such existential dilemmas, preferring instead to continually warn residents about the threat hippies posed to their way of life. Freak Power brilliantly documents the growing sense of dread with Whitmire’s department and Aspen’s elite that Thompson might win and then implement an agenda of top-to-bottom reform. It also captures the intrigue that took over Aspen when a supposed Hells Angel enforcer arrived looking for Thompson. The stranger was soon observed in local bars stirring his drinks with a switchblade.

“A lot of people in town knew that the Hells Angels were after Hunter, and so the opposition actually used that against him,” Phillips said. “They tried to make it look like the Hells Angels had a hit out on him … The establishment was freaking out. You can see they were terrified of the prospect of Hunter winning.”

Indeed, the biker wasn’t from the ranks of the Hells Angels, but attempts to intimidate the Thompson campaign by Whitmire and his allies only got worse as the election approached.

A grounded depiction of a legend

It’s known that Thompson was narrowly defeated in the race, unable topple Whitmire’s edge in the more remote parts of the county. What’s lesser known is that his campaign was nonetheless a catalyst for real change in Pitkin. Two people who worked on it soon became local commissioners, and after Whitmire left office in 1976, a new sheriff implemented elements of community policing. In 2014, the state of Colorado legalized marijuana use.

Freak Power highlights the threats of violence and the ongoing disinformation campaign directed at Thompson as he worked to get Aspen to re-think its future. It also captures Thompson’s very human response to learning he’d lost race, a moment that appears to show the seeds of his obsession with interrogating the American Dream. Thompson was soon relentlessly chasing the ghost of that dream for Rolling Stone, first with his magazine article “The Battle of Aspen,” and then with his books, “Fear and Loathing in Las Vegas” and “Fear and Loathing on the Campaign Trail.” The trajectory of those works made him one of the most famous writers in America.

Watkins and Phillips say the Sheriff’s race was critical to sending Thompson down that path.

“The race motivated Hunter to want to write about politics more, and it also made him more disgusted with the way politics work in America, especially when he thought about the amount of crazy s*** the opposition tried to do while he was running,” Phillips observed. “It gave him an intimate understanding that, if you try to challenge the establishment, the establishment will come back at you in really nefarious ways.”

Freak Power also stands out as a sustained vision of Thompson’s personality before an outlandish caricature of himself became a cross to bear in the media. Nearly all of the writer’s friends and family have said that the image Thompson began cultivating in the pages of Rolling Stone compelled him, over time, to feel like he always had to preform for the public. This included epic amounts of drinking and drug use, peppered with all manner of reckless behavior. That’s not the Thompson that is featured in Watkins and Phillips’ documentary.

“People in Hollywood have a lot of interest in that crazy side of Hunter,” Watkins acknowledged. “But honestly, when we went through all of the film, it’s just not there. This shows a real, substantial, important side of him.”

“We don’t have a single piece of footage where Hunter is out of control,” she said. “This is a totally different Hunter than the later Hunter. He’s cogent. He’s witty. He’s on point all the time. There’s a little bit of that theatrically he had, but it’s much more grounded. He was thinking really deeply about the issues America was confronting in 1970—and they’re issues that are just as relevant to us now as they were then.”