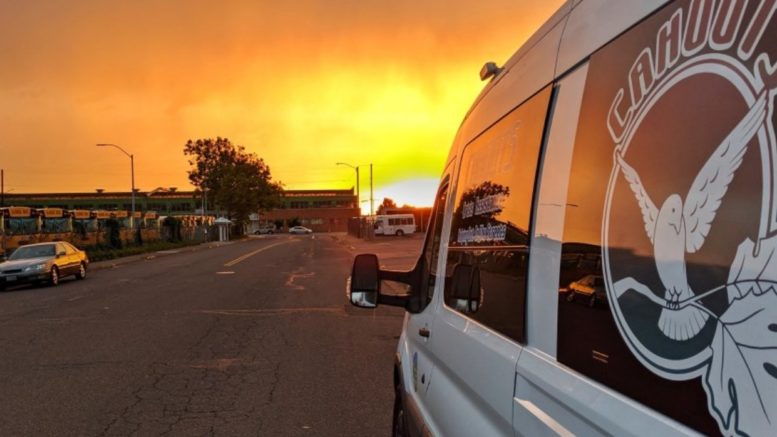 CAHOOTS in Eugene, Ore., is one of the programs being studied for alternative 911 response in Sacramento County.

The city of Sacramento is working toward having civilians instead of armed police officers respond to non-criminal 911 calls, including those involving homeless and mentally ill individuals.

Now, Sacramento County is seriously considering the same rethinking of law enforcement to avoid confrontations that too often end in violence, even fatal shootings.

On Tuesday, the Board of Supervisors received a status report, which suggests there’s a lot of potential—and a lot of work for an alternative 911 response unit.

And of 166,090 calls this year through May, 8,230 involved homeless people, leading to 736 arrests, and 524 involved people with mental illness, resulting in five arrests, according to the staff report.

Under the current proposal, a new civilian response unit would be funded out of the existing budget and work with existing Mobile Crisis Support Teams, made up of law enforcement and licensed clinicians. Five teams are on the job, while the county is recruiting for six more.

People’s Budget Sacramento is calling for $15 million to be shifted from the Sheriff’s Office budget to fund a 911 alternative. It is also urging that a community advisory board—with members including those directly impacted and independent from the sheriff—be created to design it. Some supporters of the non-law enforcement 911 response say they don’t trust county CEO Nav Gill and sheriff’s officials to put it together.

Supervisor Don Nottoli said a community advisory board is a “very good idea.”

In September, when community activists called on supervisors—unsuccessfully—to shift millions of dollars from the sheriff’s budget to human services, Sheriff Scott Jones warned that violent crime would spike and portrayed the “defund” movement as anti-law enforcement radicals and anarchists.

He did, however, say he’s willing to consider shifting deputies away from answering some 911 calls involving people with mental illness or experiencing homelessness.

County officials also plan to look at programs in other cities. They include STAR (Support Team Alternative Response) in Denver, which began in June. Funded by a $1.2 million grant, the team includes a paramedic and behavioral health clinician and has responded to 271 calls through Aug. 7, none of which required police back-up, according to the county staff report.

A much more established program is CAHOOTS (Crisis Assistance Helping Out On The Streets) in Eugene, Ore. Started in 1989, it has a $2.1 million annual budget. Two-person teams of medics and crisis workers responded to 24,000 calls in 2019, and called for police back-up in 250 calls, the staff report says.

The county is also seeking public input on the idea; there’s a form for written comments and an online survey through Nov. 13.

Under the proposed time line, public comment would continue until Dec. 15, the analysis of other programs and potential approaches would be complete by Jan. 15, the financial analysis would be done by Jan. 31 and supervisors’ approval of a pilot program would happen by Feb. 15.

The city is on a similar schedule.

On July 1, the City Council approved Mayor Darrell Steinberg’s police reform plan, which included a proposal to create an Office of Community Response, which Steinberg called a “revolutionary” change.

The unit will be staffed by mental health professionals and social workers and will be started with $5 million. A draft plan is due by the end of the year so the council can adjust the city budget. City officials will study how many 911 calls can be transferred to the new unit—and thus how much of the police budget can be shifted.

In 2019, city police officers responded to about 400,000 calls for service, and about 54,000 were “low risk,” such as medical assistance, welfare checks, missing persons and abandoned vehicles, according to preliminary numbers from the department. In September 2020, the department says it responded to 2,676 calls involving homeless individuals and 405 involving mental illness.

Police Chief Daniel Hahn also supports a different response to non-criminal 911 calls. “As a police department and as police chief, we completely agree that our officers go on calls that we don’t believe that they should be going on,” he told the City Council.

However, Hahn also says there need to be more mental health and substance abuse services for those people that new civilian teams come across. In July, the council approved a $1.2 million proposal from WellSpace Health to divert people intoxicated from alcohol and drugs from hospitals or jails and put them in a center where they will receive counseling as well as COVID-19 testing. The program started Oct. 1 and will go through the end of the year.

But some activists are urging that the city contract with community groups instead. They point to Mental Health First, which has been working in Sacramento since the beginning of the year.