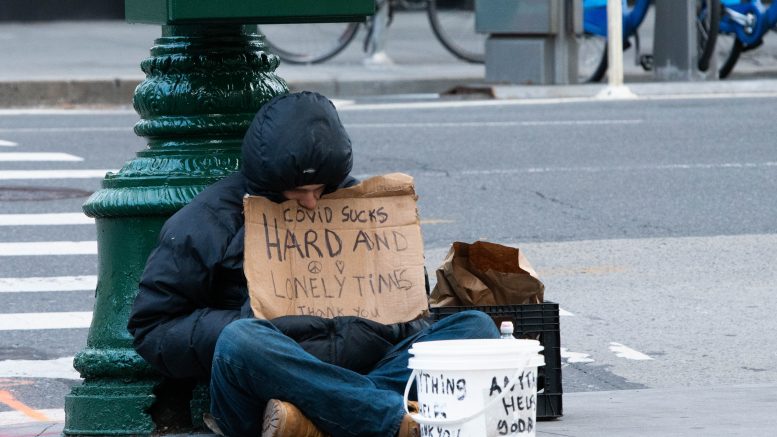 Officials say that many homeless people lack a safe place to sober up during the COVID-19 pandemic. (Photo by Anthony Quintano for Wiki Commons)

The Sacramento City Council approved the first big task for a new team that is to eventually handle a big chunk of 911 calls.

At a special meeting Tuesday afternoon, the council endorsed a $1.2 million proposal from WellSpace Health to divert people intoxicated from alcohol and drugs from hospitals or jails—and keep them safe from possible COVID-19 infections. WellSpace would work closely with the city’s new Office of Community Response to coordinate with police and fire personnel and other first responders.

City and WellSpace officials say that during the coronavirus pandemic, a key gap that has clearly emerged, particularly for the homeless—a place to sober up or recover from substance abuse where they won’t contract the virus or infect others. Emergency rooms don’t have space, and neither does the county jail.

“WellSpace Health has grown increasingly concerned that individuals who have substance use disorders or who are intoxicated may present greater risk of contracting COVID-19 and once infected, are at greater risk for spreading the disease among similarly vulnerable people,” WellSpace CEO Jonathan Porteus wrote in a memo to the city. “The increased risk threatens to negatively compound the public health crisis in the City of Sacramento.”

Mayor Darrell Steinberg said that without dealing with substance abuse, especially meth, the city will never solve homelessness. Councilman Jeff Harris, who has led the push for the program, said meth is a rampant problem in Sacramento.

Also, the staff report notes that Gov. Gavin Newsom shut down bars again on July 13 to try to control a spike in cases and says there “is ample evidence that intoxication increases an individual’s risk of contracting COVID-19” or spreading the virus because being drunk “reduces one’s awareness and practice of” washing hands, wearing a mask, maintaining six feet of physical distance and following public health guidelines in general.

Under the SURE (Substance Use Respite and Engagement) program, a team comprised of a medical provider, a licensed nurse, a substance abuse counselor and a case manager or peer mentor would help intoxicated people recover, counsel them on avoiding future substance abuse and also test them for COVID-19 and educate them on stopping infection.

The program would be available 24/7 with 10 semi-private rooms with room for 20 people. With an average eight-hour turnover, the program could serve as many as 60 people per day.

SURE would operate between Oct. 1 and Dec. 30, when public health experts warn of a potential second wave of COVID-19 that could coincide with the seasonal flu season and overwhelm hospitals. WellSpace is already the biggest primary care provider for homeless individuals in Sacramento.

On May 26, the council already set aside $1 million of the $89.6 million in federal COVID-19 relief for this kind of program. To continue the program past the end of the year, it will likely take federal, state and other funding, possibly from hospitals. But if it’s successful, the city could invest more as well, or possibly partner with Sacramento County. Councilmen Allen Warren and Larry Carr said such programs should be primarily a county responsibility.

The new Office of Community Response is one of two major police reforms—the other is an independent inspector general to investigate police use-of-force—proposed by Mayor Darrell Steinberg and given the initial go-ahead by the council on July 1.

The office has been funded with $5 million, while the city studies how many 911 calls don’t require a police response and could be handled instead by teams of mental health and social service professionals.

It has an interim director, Bridgette Dean, a licensed clinical social worker who already oversees the homeless outreach, mental health and social services teams within the Police Department.

Dean told council members Tuesday that the purpose of her office is to reduce law enforcement response to non-criminal crises–and that the “sobering center” can help that happen. Meth is related to multiple kinds of 911 calls and its use has increased during the pandemic, she said.

“We need to engage at the moment of crisis,” she said.

With this effort on substance abuse, this new office can show it’s up to the task on the two most important issues at the moment—police reform and the coronavirus pandemic.

Be the first to comment on "Infecting while impaired"