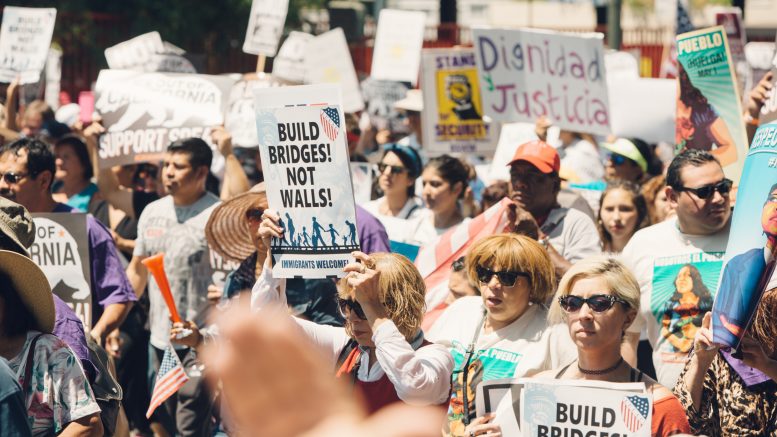 Workers take part in a May Day event in Los Angeles in 2017. (Photo from Wiki Commons)

Editor’s note: The COVID-19 recession is hammering women and people of color

Working people are bearing the brunt of the recession caused by the COVID-19 pandemic.

And because low-wage workers tend to be women and people of color, the downturn will worsen economic disparities, says a report released Thursday by the California Budget & Policy Center.

“This is a racial justice issue,” says Alissa Anderson, senior policy analyst and the report’s author.

The study confirms what many have seen anecdotally, but the numbers are still startling:

In the two months between February and April, California lost 2.6 million jobs—twice as many as the state lost during nearly three years of the Great Recession.

Employment for Black and Latino women plummeted by more than 20% between February and May—three times the number among white men and twice that for white women.

Job losses were also higher among immigrants between February and May, and 64% of losses were in low-wage industries.

“This means that many of the people who have lost work were already struggling before the crisis and are unlikely to have a financial cushion to weather this downturn,” the report says.

And the plight for these workers will only get worse if Congress doesn’t pass another relief package soon because the $600 a month federal unemployment supplement ends July 31. Plus, without more federal aid, the state budget deficit will deepen, making it even more unlikely that there will be additional money to support struggling Californians.

For one solution, the nonprofit center is urging state lawmakers to consider shifting money from tax breaks now given to corporations and the wealthy.

“State policymakers have an opportunity to make the investments needed now, especially for Black, Latinx, and immigrant Californians, and build an inclusive economy,” Anderson said in a statement.

At the same time, many low-wage workers were among the first to return on the job or were classified as “essential” from the start, exposing them to the coronavirus.

So both their physical and economic health is most in danger during the pandemic. There were good reasons why on May Day 2020, workers walked out in protest—and why so many groups are calling on government to do more.

Be the first to comment on "The hardest hit"