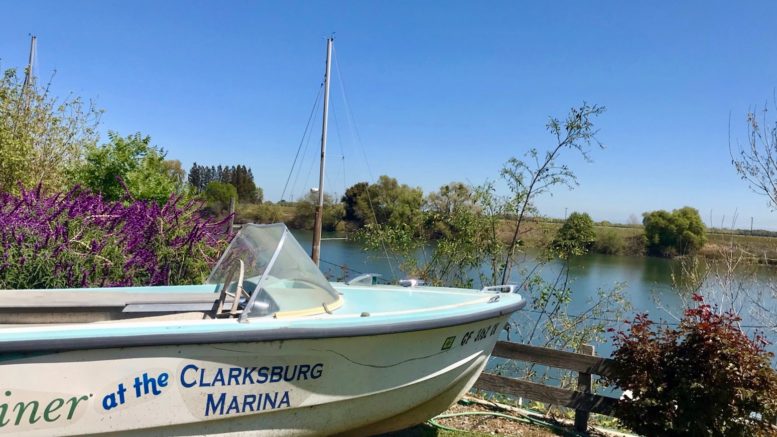 Residents of Clarksburg worry that the state’s latest Delta tunnel plan is a threat to their farming, businesses and overall community. Photo by Scott Thomas Anderson

With the coronavirus pandemic upending life in California, state officials are extending their deadline for public input on the latest plan for a 50-mile tunnel through the Delta to move large amounts of its fresh water south.

But while the Department of Water Resources has hosted eight meetings from Los Angeles to Redding for people to voice their concerns, it turns out DWR officials have already heard concerns about the new tunnel’s design—from the state’s own independent team of engineers, who call the current plan “logistically impractical.”

So far, the department isn’t slowing down on its time line to design the project, even as concerned groups and Delta residents try to balance watch-dogging the tunnel’s impacts with surviving COVID-19.

The California WaterFix, formerly envisioned as twin tunnels and now proposed as a single tunnel, has been controversial under various names and incarnations for 14 years. Delta communities, environmental groups, indigenous tribes and sporting alliances lined up in such numbers against the project championed by former Gov. Jerry Brown that Gov. Gavin Newsom changed course in February 2019 almost immediately after taking office.

At Newsom’s direction, DWR and the joint powers authority in charge of the project’s design, the Delta Conveyance Design and Construction Authority, were told to abandon their model for the twin tunnels. Instead, the governor told them, they should pursue a single Delta tunnel. Yet, when DWR officials unveiled their initial concept for the reconfigured plan in early February, many of the twin tunnels’ most embattled design features remained—reviving widespread fears about the Delta’s ecology and way of life.

While it was not widely known at the recent Sacramento meeting, DWR and the design authority had already heard concerns from the independent team of engineers hired last year, when the state’s engineers began re-working project. The Independent Technical Review Committee delivered a report to state officials in early December that specifically analyzed design features that are part of the state’s pending Environmental Impact Report. These experts found that the single tunnel, as it’s now proposed, is “logistically impractical” and doesn’t merit further study.

“The shaft locations are located a significant distance from Interstate 5, accessible by only farm roads with hindrances such as narrow weight-restricted bridges and single lanes,” their report states. “This makes supporting large operations, which requires a constant transfer of materials and people in and out, impractical and expensive as well as difficult to price. In addition, addressing safety, including hospital access and tunnel safety duplication, creates a costly layer or redundancy without definitive costs.”

The construction impacts of WaterFix have also troubled other independent experts, particularly the years of heavy equipment and big rig traffic degrading the Delta’s levee system. Meanwhile, the concerns cited by the independent engineers also validate the fears of Delta farmers, who have long worried that tunnel construction will shut down the region’s entire agriculture industry during harvest.

The review committee also found that the tunnel muck dislodged from digging will not be reusable due to its clay composite, which calls into question the design authority’s entire plan for building embankments for the project’s forebay.

“The ITRC’s recommendations are but one of many expert opinions we are soliciting to provide the most efficient and cost-effective conveyance project for DWR,” Blois wrote. “We will let the best science and facts guide us toward that goal.”

Deirdre Des Jardins, a hydrologist and NASA-trained expert on computer modeling who has testified in numerous state hearings about the WaterFix project, said that DWR and the design authority should carefully consider what the independent engineers are warning.

But she said she’s more alarmed that the state is moving so quickly to green-light the tunnel while most stakeholders are still dealing with the coronavirus crisis. The tunnel’s current engineering schedule, as outlined in a March 19 report, calls for state officials to finish its shaft design by May. They plan to finish the design for its two massive concrete-and-steel intakes along the Sacramento River by August.

“Everyone in the Delta is just trying to survive. They don’t have time to engage on this tunnel stuff right now,” Des Jardins said. “It’s pretty clear that DWR is just trying to check the box on public input, in the middle of a pandemic, and just rushing ahead without really looking at other options.”

Barbara Daly, a 28-year resident of the Delta, attended both of the state’s recent meetings as a member of North Delta CARES, a group that’s been advocating for the region’s historical and cultural resources that are threatened by WaterFix.

“The meetings were basically a repeat of the ones they held in 2009, so it was just being taken back to something you’d already gone through 11 years ago,” Daly told SN&R.

She said Delta residents are at a disadvantage trying to participate in the WaterFix process because of the economic havoc COVID-19 is wreaking in their towns.

“The attention for us isn’t on the tunnel now,” she said. “Many of us are small business owners that are probably going to be out of business. All we can think about is how we’re going to re-adjust if and when this is over.”