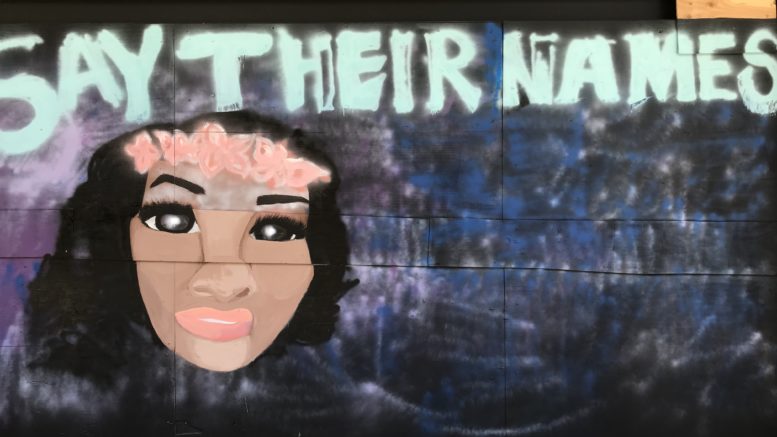 A downtown Sacramento business boarded up during police reform protests displayed a slogan chanted by demonstrators. (Photo by Foon Rhee)

The Sacramento City Council and Police Department haven’t adopted all the recommendations made by a citizens advisory panel in 2018 and 2019.

But the Community Police Review Commission isn’t waiting around to work on more proposals—not in a year marked by months of protests calling for police reform and for justice for George Floyd, Jacob Blake, Breonna Taylor and others.

On Monday evening, the commission discussed a draft proposal that calls for pushing changes in federal and state law, revising police department policies and ending a contract with a controversial company.

The potential recommendations from an ad hoc committee include ones to:

UPDATE: The ad hoc committee plans a public hearing via Zoom from 1 p.m. to 3 p.m. on Oct. 18 to receive feedback on its proposals and receive any other ideas. The commission is also seeking feedback from the Police Department before its next meeting on Nov. 9.

The committee plans to present its final recommendations by December. If the full commission endorses the ideas, they will go on to the City Council. And if the council approves, many of the proposals will likely have to be negotiated with the police officers union.

On July 1, the council also adopted Steinberg’s police reforms: creating the inspector general to investigate police shootings, deaths in custody and any use of force resulting in death or serious injury; and moving toward a new civilian corps to respond to non-criminal 911 calls, including those involving homeless and mentally ill individuals.

On July 8, Attorney General Xavier Becerra issued a second set of recommendations for Sacramento police, including requiring its officers to deescalate confrontations with residents and completing a comprehensive study on apparent racial disparities in use-of-force incidents.

Community Police Review Commission Chairman Mario Guerrero, who is on the ad hoc committee, says Sacramento must do even more on police reform.

“We cannot remain silent, and we cannot simply say we will do better,” he wrote in a commentary for SN&R. “We must push for change now.”