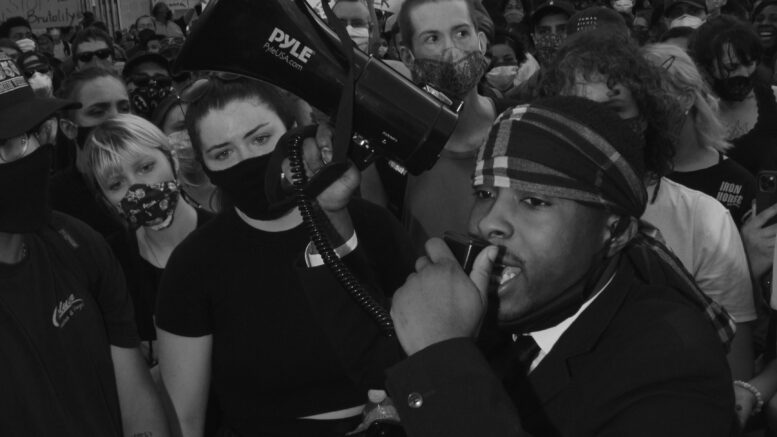 Stevante Clark, whose brother Stephon was killed by Sacramento police, spoke days after the killing of George Floyd in Minneapolis. (Photo by Kevin Gomez Jr.)

The watch-a-man-be-strangled horror of the George Floyd video.

The staggering unfairness of the Breonna Taylor story.

The countless exhibits of cops shoving, clubbing, blasting and plowing into protesters.

Not since the 1960s did California legislators have this much sustained momentum and political cover to enact sweeping reforms regarding how the justice system interacts with Black and Brown communities. But California, a mirage of progressive standard-bearing, largely scuttled the opportunity.

Of the two-dozen criminal justice reform bills the California Legislature considered during a pandemic-dominated summer session, only nine became law by Wednesday.

Many of the most significant reforms, however, never even made it to the governor’s desk.

Here’s what the governor and his Democratic majority failed to accomplish.

They include measures that would have:

In his veto message for Assembly Bill 1299, the one charging the state Commission on Peace Officer Standards and Training with completing misconduct investigations and tracking fired officers, Newsom signaled that he preferred a stronger measure that police unions and Republican lawmakers kept from reaching him.

“I know it wasn’t until intense pressure was put on Speaker Rendon that the bill was able to move,” James Burch, policy director for the Anti Police-Terror Project, told SN&R days before the end of the legislative session. “I can’t say exactly what the conflict was.”

That proved too little, too late, as SB 731 was rescued from committee only six days before the legislative deadline.

The bill’s Democratic author, Sen. Steven Bradford of Gardena, and Senate leader Toni Atkins, have promised to bring the decertification bill back next session, something Newsom referenced in his veto message for AB 1299.

“I am concerned this bill will slow momentum for broader decertification measures in future legislative sessions,” Newsom wrote. “The Legislature has signaled that it will continue its work on decertification, and I support the development of legislation with a broader approach.”

Other bills that died before reaching the governor included measures:

Media or militia—and other veto grounds

Newsom’s most curious vetoes targeted bills protecting the media’s access to protests and a noncontroversial pilot program that could have relieved some police agencies from responding to non-dangerous mental health and homelessness calls.

Regarding the former, Newsom expressed concern that Senate Bill 629’s definition of reporter was too broad and could be abused by “white nationalists, extreme anarchists or other fringe groups with an online presence.”

Newsom indicated he would implement his own protections for journalists and legal observers at the state level, “and am encouraging every California law enforcement agency to do the same.”

As for Assembly Bill 2054, known as the CRISES Act, the governor sourced his veto to a disagreement over which state bureaucracy should manage it.

Newsom wrote in his veto that he didn’t think CalOES was the right agency to administer the pilot.

While the bill passed the Legislature with bipartisan support and faced little formal opposition, disagreement brewed behind the scenes about where to house the pilot program. Newsom reportedly wanted to run it through the Board of State and Community Corrections, a nonstarter for advocates who wanted no input from law enforcement officials.

“The goal of this bill is to provide a community-based response to mental health crises,” Burch told SN&R last month. “When we hear that this bill might be housed in an agency that has ties to the criminal justice system, we’re not interested at all. This is not a bill that can or will be used to further criminalize people who are in crisis or deny those people a support system free from law enforcement.”

That disagreement killed the state’s one “Defund the Police” measure, though Sacramento and a few other cities have mounted their own community-based pilots. The bill’s author expressed disappointment in the governor’s decision.

“This bill was an easy, noncontroversial opportunity to advance racial equity and save lives in California,” Assemblymember Sydney Kamlager said in a statement. “We will continue to pursue community alternatives to police response that are not controlled by law enforcement and we will work with the Governor to create such a program. Justice demands it.”

Be the first to comment on "California had a rare opportunity to lead on police reform. Here’s what happened instead."