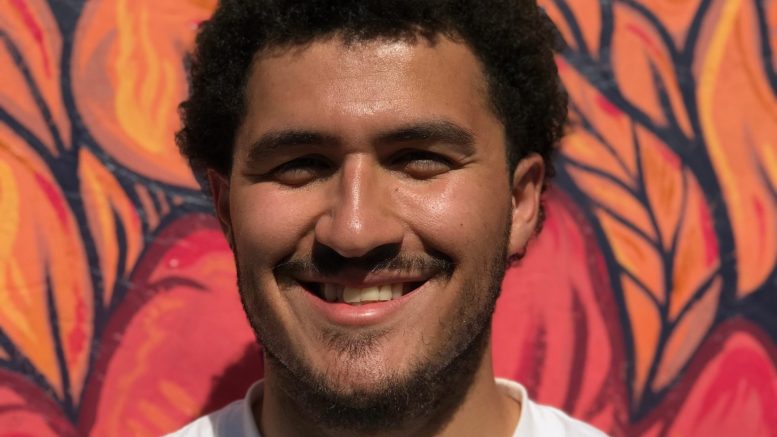 “Graffiti art always seemed super beautiful and that was like my first introduction to art, you know what I mean? Driving down the streets of Sacramento, even places that I visited in the Bay area or L.A., I felt like graffiti art was always accessible,” says artist Aik Brown. “I always wanted to get my art on walls.”

Aik Brown’s father introduced him to graffiti art when he was just four years old. From then on, his fascination with graffiti grew.

“In elementary and middle school I would just ask people like, ‘Hey, bro, let me do your name,’” he said. “I would do like 50 or so drawings in a week just ’cause so many people wanted me to do them. I should’ve been hustling, man. I should have asked for like a dollar or two, but I didn’t.”

Throughout the rest of high school, Brown continued to make graffiti-inspired drawings, practicing his letters and pushing his style. His aesthetic was heavily inspired by cartoons such as Tom and Jerry and Looney Tunes, attracted by the simplicity of the characters.

But as he moved from high school to college and started to tune in to the fine art world, he found his aesthetic wasn’t as well accepted by his professors at Humboldt State University.

“When I was talking to my professors, they were like, ‘Hey, you can’t do that here.’ I was just like, ‘Why?’ They’re like, ‘To make it here in the art world, you’re going to have to switch it up in some type of way,’” he said.

But according to Brown, in the graffiti art world there are no rules. He says that his upbringing with graffiti art and his Black and Mexican cultural heritage gave him a different set of values that conflicted with the mainstream art world.

“I’m doing what I can to represent for my Black and Brown people. I hope that there’s a new light for us.”

“’Oh, we’re just contemporary ballet and this and that. You know, it’s like every single move has to have a name. With graffiti art and things like that, it doesn’t have to have a name. It’s literally whatever I want it to be,” he said. “That’s why we call it freestyle.”

Brown was the first in his family to attend college so he wasn’t ready to give up, though he did consider it.

“It was tough, bro…” he said. “I come from a very Afrocentric point of view and this Western-centric of this point of view of what beauty is and what, what I feel, what makes sense to me. It was a lot of back and forth and a lot of arguments that I had with professors that ultimately…helped me in that.”

While Brown believed that his work was improving in Humboldt State’s art program, he was feeling pressures outside of class that made it difficult to stay positive.

“Once I got there and then it was a pretty rude awakening,” he remembers. “Art wise, it was amazing, but outside of that, it was fucking cruel, bro,” he said. “It was just super racist, it was a very rural area. They had like a KKK organization right down the street from the school.”

With the constant stress of dealing with racism wearing on him, he says the only reason he stayed at Humboldt State was a club called Brothers United, made up of predominantly Black students who supported one another.

“We went everywhere with each other. We went to the movies, we went to parties, we went grocery shopping, we did everything together,” he said. “I was just glad to have that support system up there. They helped me get through all four and a half years of being there.”

Brown says another motivation to stick it out was his family. He wanted to inspire his brothers and sisters to follow in his footsteps and go to college.

“I’m super glad that I did it, to be that role model for my little brothers and sisters. I actually have two sisters now in college, one’s at Long Beach and the other’s at UC San Diego, so it’s really cool to see them go through it,” he said.

Now, Brown is forging his path as an artist and muralist both in Sacramento and his current home in Oakland. He is a recipient of a Black Artists Fund grant and has worked with Wide Open Walls, Graffiti for Good and Crocker Art Museum.

His work maintains his graffiti aesthetic with bright colors, heavy outlines and simplified imagery. The work speaks to the experience of Black people in America and does so with a blinding sense of hope. Brown’s figures are drawn with a strong sense of self that doesn’t concede to the mainstream representations that Brown has fought against and that addresses what he calls “this craziness right now in our country.”

“Hopefully a lot of people will be able to uplift these Black and Brown artists that are doing amazing, amazing work that are being underrepresented. And this goes for Sacramento, too,” Brown said. “I’m doing what I can to represent for my Black and Brown people. I hope that there’s a new light for us.”