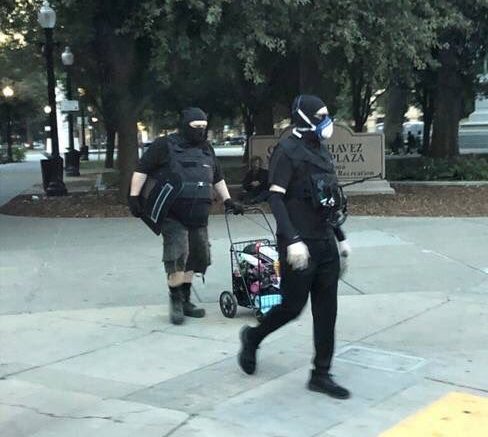 Some among a second group of protestors Thursday night wore all black and body armor. (Photo from Sacramento Police Department)

It’s an ongoing tension in America’s debate on police violence and racial justice: When does justifiable outrage cross the line into unlawful violence?

Just before the latest protests in Sacramento started Thursday night against the latest shooting of an unarmed Black man by a white police officer, Mayor Darrell Steinberg welcomed the “righteous push for change” represented by peaceful demonstrations, but warned against violence and vandalism.

“I am grateful to live in a city where people care enough to take to the streets after a hard day’s work to stand in solidarity with one another and other communities in pain,” he said in a blog post. “I support this and will always support this.

“It is the second after dark protest where I have an issue,” he added. “Vandalizing or destroying Sacramento’s businesses is not principled protest. These hard-working business owners, many from our diverse communities, are struggling to serve our community during the Covid pandemic. Targeting them is cruel and doesn’t recognize the humanity of those who have poured the lives and their savings into enlivening our downtown and our neighborhoods.”

“I’m incredibly disappointed that city leaders are branding tonight’s protest as potentially violent w/o any evidence. The recent murder of protestors in [Kenosha] is another example of how those prejudices bring harm to people exercising their constitutional rights to free speech,” she tweeted.

“I sincerely hope our city leaders will pull back those statements, and honor the foundational aspect of our democracy: the right to take to the streets to demand action and accountability,” she added.

It turned out there was some violence and vandalism—but not by a the group of demonstrators from the Black community and not to the level of some protests after the killing of George Floyd by police officers in Minneapolis, which prompted Sacramento officials to impose a curfew and call in the California National Guard for nearly a week in early June.

At a press conference Friday afternoon, after Sacramento County Sheriff Scott Jones asked for the Guard to be deployed, Steinberg said that would be “premature” and could “inflame” the situation.

“We will uplift those protesting loudly and peacefully. At the same time, we will hold those who destroy property fully accountable.”

Also Friday morning, Valenzuela followed up in a tweet: “Now, more than ever, we need our leaders to focus on deescalating tension and solving the problems making folks feel so angry and frustrated. In the words of Martin Luther King III: ‘people are not going to stop until we see some things begin to happen differently.’”

“Now, more than ever, we need our leaders to focus on deescalating tension and solving the problems making folks feel so angry and frustrated.”

Thursday night, two distinctly separate groups protested over the case of Jacob Blake, shown in a viral video being shot seven times in the back by a white police officer Aug. 23 in Kenosha, Wisconsin. His family says he is paralyzed from the waist down. Tensions escalated when two protestors were killed on Aug. 25, allegedly by a 17-year-old who responded to a local militia’s call to protect property.

The first protest, organized by Justice Unites Individuals and Communities Everywhere, was peaceful. About 5:30 p.m., about 100 protestors gathered at Cesar Chavez Park, the focal point of police reform demonstrations since May. They then marched toward the state Capitol and along the way ran into Steinberg, who emerged from a restaurant. During a brief conversation caught on video by reporters, the mayor was told he wasn’t welcome to join.

An organizer chastised the mayor, saying that he wasn’t doing enough on police reform. Steinberg said later that he disagrees, but respects peoples’ right to “speak truth to power.” On July 1, the City Council backed Steinberg’s plan to create an independent inspector general to investigate police shootings of violence and a new civilian unit to respond to non-criminal 911 calls involving people with mental illness or homeless individuals. But activists have been calling for more sweeping changes, including defunding the police department.

Thursday night, the first group of protestors left by about 7 p.m., according to media reports.

That one did lead to property damage. About 150 protestors, some wearing all black and body armor, smashed windows, spray painted graffiti and started a few small fires, but almost exclusively at government buildings, including the Sacramento County Sheriff’s Department and District Attorney’s office, not at downtown businesses that had been warned about potential vandalism and had boarded up.

Police in riot gear protected City Hall and the state Capitol, and most protestors left by 11 p.m.

“The crowd has dispersed,” Sacramento police tweeted at 11:12 p.m.. “At this time no arrests have been made. Detectives will be following up on reports of vandalism. Law enforcement presence will remain downtown throughout the night.”

District Attorney Anne Marie Schubert issued a blistering statement Friday afternoon, calling the Antifa group domestic terrorists and anarchists and promising to prosecute anyone arrested to the fullest extent of the law.

“This organization seeks to destroy public safety, dismantle law enforcement, and eliminate all social discourse,” Schubert’s statement said. “These anarchists have waged attacks across this country, in major urban cities, including Portland, Seattle and Denver.  Their tactics are rooted in organized violence and terror.”

On Friday night, about 150 to 200 protestors returned downtown and there was more damage to buildings. Police said many demonstrators were wearing helmets and shields, and some carried weapons. The crowd dispersed about 11 p.m., and one person was detained, who was carrying a BB gun.

Saturday afternoon, Steinberg issued a statement via Twitter praising the police for deescalating potential violence and saying that the property damage had been minimal, especially compared to other cities, where there had been “large-scale destruction.”

A smaller group of demonstrators, about 75 people, gathered Saturday night as well. A heavy police presence boxed them in and forced them to march in a smaller area. Police reported two arrests, one for pointing a laser at officers’ eyes and a second for resisting, and released a photo of seized items, including gas masks, a smoke bomb and a bottle of urine.