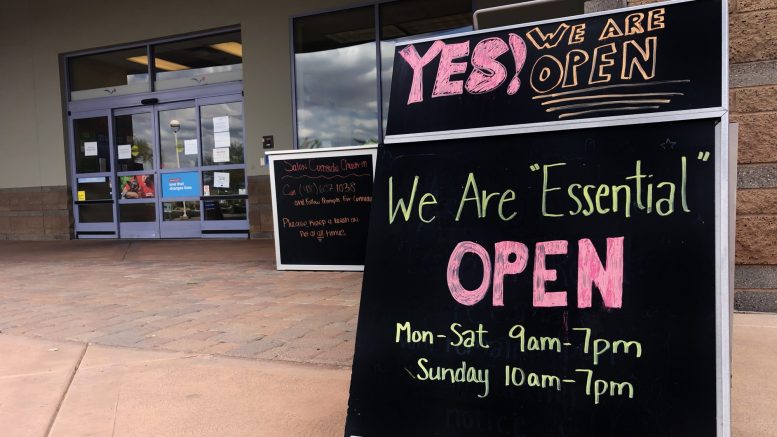 Editor’s note: County cuts COVID-19 numbers enough to reopen more businesses, but not yet for all schools

Finally, there’s some light at the end of the lockdown tunnel.

The state announced Tuesday that Sacramento County has cut the number of new COVID-19 cases and positive tests enough to allow more businesses, and perhaps more schools, to reopen.

“So happy to hear this good news for all of our small businesses and restaurants struggling to get through the #COVID19 pandemic,” Mayor Darrell Steinberg quickly tweeted. “Let’s all be vigilant about physical distancing, wearing masks and not hosting gatherings in our homes so that we don’t have to reverse course.”

Sacramento County Public Health—which has ramped up testing and community programs and received $45 million more to stop the spread of coronavirus—immediately issued an updated order effective at 3 p.m. Tuesday detailing what activities will now be allowed by moving after two months in the most restrictive purple tier to the red tier.

The order follows state guidelines for the red tier: restaurants can offer indoor dining, but only at 25% capacity or 100 people, whichever is less. The same rules apply to movie theaters and places of worship. Museums can also reopen indoors at 25% capacity. Gyms and fitness centers can open indoors with safeguards, but only at 10% capacity. Bars that don’t serve food, nightclubs, concert venues and live theater must still stay closed.

While the red tier allows schools to fully reopen for in-person classes, the final decision rests with local officials. In its new order, Sacramento Public Health said that all schools will be allowed to reopen only if the county stays in the red tier for another two weeks. That gives time for schools to prepare, as well as to make sure the case numbers stay down, said Mark Ghaly, the state’s Health and Human Services secretary.

Sac Public Health has granted waivers to about 20 private and parochial elementary schools to resume in-person instruction. Following state guidance, it has also allowed in-person classes for small groups of students with disabilities and special needs.

Six other counties—Butte, Contra Costa, Fresno, San Joaquin, Santa Barbara and Yolo—also can move out of the state’s most restrictive purple tier, and Amador, Calaveras and San Francisco moved to the even less restrictive orange tier. Combined, it’s one of the biggest steps toward reopening California since the second shutdown hit in late July.

Still, Ghaly said in a press conference that there’s widespread stress and anxiety, so mental health is a major concern.

Sacramento County Public Health has been cautious in lifting the lockdown after the first round of premature reopenings in mid-June led to a spike in deaths and cases.

The state reversed course on July 13, and Sacramento County issued a public health order that again shut down non-essential indoor businesses. Public Health has let some businesses reopen with significant safeguards, but only after state officials acted first, as with nail salons on Sept. 23.

The Blueprint for a Safer Economy—the state’s second try at reopening without a coronavirus resurgence—is built on four tiers. When the blueprint was unveiled at the end of August, Sacramento was one of 38 counties, with about 80% of the state’s population, that started in the purple tier for widespread COVID-19 transmission. Sacramento County was at 12.0 new daily cases and an 8.1% positivity rate, with 293 deaths and 18,052 total cases.

To get to the red level with only substantial spread, a county must have 7 or fewer daily new cases per 100,000 people and a test positivity rate of 8% or less.

In the first update on Sept. 8, Sacramento County improved, but remained in the purple tier with 10.3 new daily cases and a positivity rate of 7.2%.

In the Sept. 22 update, Sacramento County improved again to 6.2 new daily cases per 100,000 people and a 4.6% positivity rate—low enough to move to the red tier if maintained for a second week.

And in Tuesday’s update, the numbers are 6.6 new cases and a 4.6% positive test rate.

To move forward, a county must meet the next tier’s criteria for two consecutive weeks. A county must stay in that new less restrictive tier for at least three weeks.

To help small businesses and their employees even more, Steinberg says he wants the county to reach the even less restrictive orange tier no later than Halloween. That would require fewer than 4 new cases a day per 100,000 people and a test positivity rate below 5%.

On Wednesday, Sacramento Public Health announced a new campaign to accomplish that goal with decals, posters and a website with more information on how businesses, hospitals, schools, restaurants, gyms, hair and nail salons, grocery stores and others can help the effort.

But seasonal flu season is starting soon, and many experts fear another deadly surge of COVID-19 cases. If that happens, restrictions could be imposed again, maybe even for the rest of the winter.

The least restrictive yellow tier—which allows most indoor businesses to operate—requires fewer than 1 new case per 100,000 plus a positivity rate of less than 2%. The last time that Sacramento County’s numbers were that low was the end of May, after the initial stay-at-home orders, according to Public Health.

Be the first to comment on "Sacramento’s lockdown eases"