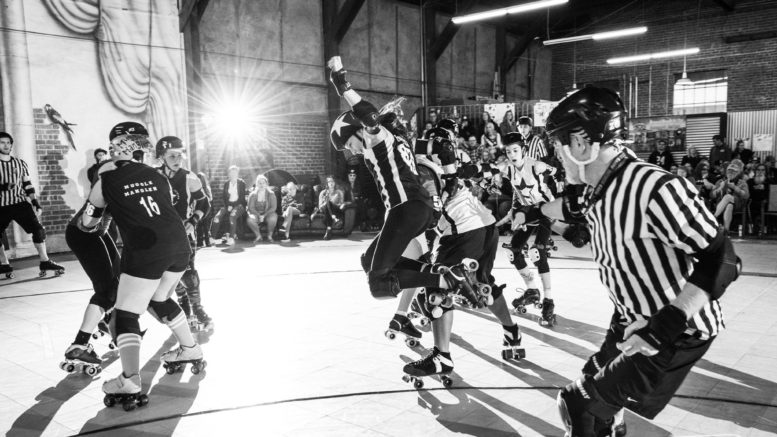 Sacramento Roller Derby finally found a new home, but that doesn't mean they can use it. (Photo courtesy of Liz Marchiondo)

Amid COVID-19, Sacramento Roller Derby’s permanent home is on hold

“We went from two leagues of about 40 [skaters each] to a league of about 150 pretty quickly,” says the new league’s executive director, Lemon, aka Amanda Dunham.

Growth that rapid required a bigger space for training and exhibition, and the league found it: A large warehouse in Sacramento’s River District. With one of the league’s old practice spaces being so close by, Lemon says it was a chance to establish itself.

“We thought, with this opportunity, why not stay and be part of the community permanently?”

“For me, skating is more than just a hobby. It’s about … recognizing the confidence and courage you can get from the track and use in your life.”

That new, permanent home, however, sits empty, waiting for state and local stay-at-home orders to be lifted. The league owns the new building, and after renovations to make the building more hospitable and in compliance with the Americans with Disabilities Act, league leaders hope it can be used not just for roller derby, but as an event space for other organizations and nonprofits.

“The River District doesn’t really have any places like this,” Lemon said. “And that’s something we really thought about when we went to purchase the building.”

Those needed renovations can still take place, but without the ability to sell tickets to monthly matches, the Sacramento Roller Derby estimates it’s lost half its yearly income. As a 501(c)(3) nonprofit, the league hopes to recoup some of that loss by participating in the Big Day of Giving on May 7, with a $10,000 goal.

It’s not just a financial hit that skaters are experiencing, though. It’s the loss of camaraderie—derby creates a tight-knit group of friends and is a major morale builder.

“For me, skating is more than just a hobby,” says Sacramento Roller Derby skater, Honey Bomb, aka Becca Nelson. “It’s about … recognizing the confidence and courage you can get from the track and use in your life.

It definitely takes courage to be one of ten skaters on a roller derby track, where you’re expected to compete in a series of high-contact rounds, or “jams,” to beat the opposing team.

But for a group used to training together, finding ways to work out solo hasn’t been easy.

“I have a hard time getting motivated to work out outside of roller derby,” Honey Bomb says. “Because there’s a goal there, you prepare for games, and you have a level of accountability to your team.”

Be the first to comment on "Stopped in their tracks"