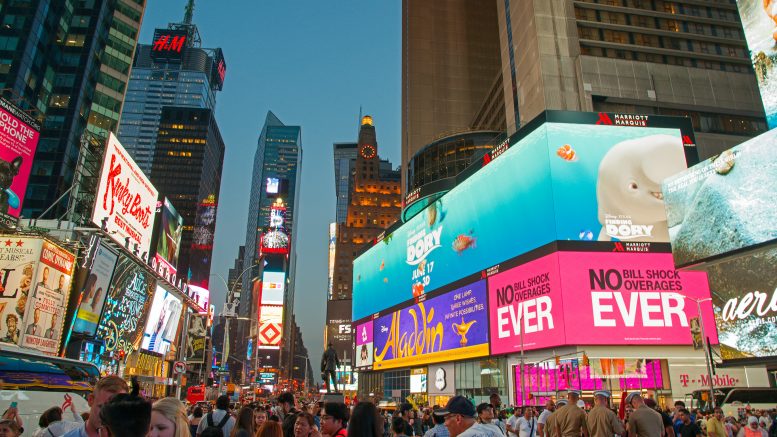 Theaters on Broadway went dark in March and won’t reopen until at least January. (Photo from Wiki Commons)

Editor’s note: Science and surveys suggest how tough it will be to get theatergoers to return during COVID-19 pandemic

In Sacramento and across the country, performers and promoters desperately want to welcome back patrons to live theater. But when will theatergoers feel safe enough to return during the COVID-19 pandemic?

Their fears are well-founded; more science is showing the dangers of large crowds in enclosed indoors spaces. That is a huge challenge—and it seems even more daunting with what theatergoers are saying in some recent surveys.

In a national survey of more than 5,000 arts patrons, the largest to date, AudienceView found that they are most nervous about being close to strangers in their seats, as well as in washrooms and lines. The vast majority said they would not be comfortable attending without testing or a vaccine, though requiring masks and use of hand sanitizer would help. Also, 61% of respondents said they would pay between 10% and 25% more for tickets to offset lost revenue from empty seats for physical distancing, and half said they would consider using a virtual reality device to experience theater.

The findings are similar in a poll of theatergoers in more than 40 markets, including Sacramento. That survey isn’t being publicly released.

Broadway Sacramento sent the online survey to its supporters in July, saying that “the theater world is actively working out the best way to move forward with live shows and events once it’s safe to gather publicly again.”

UPDATE: On Dec. 9, Broadway Sacramento told subscribers that “Hamilton” will open its Broadway on Tour season, starting Sept. 15, 2021. It previously announced that “Come From Away” was rescheduled to June 29-July 4.

“Please be assured that the health and safety of our patrons and employees is our number one priority, so we will continue to monitor the coronavirus situation closely, staying up-to-date with information and guidance provided by government officials and public health authorities,” Broadway Sacramento says on its website.

City officials have said that patrons may have their temperatures taken and be required to enter and exit in smaller groups. There may be no intermissions to stop people from crowds in the lobby.

Broadway Sacramento isn’t the only major arts group in the region trying to survive the pandemic.

Sacramento Ballet told patrons in July that it is canceling its 2020-21 season and, without any ticket revenue, is losing its artistic director. It plans to return to the stage in late 2021. “We look forward to returning to our lives—on stage, up close and personal,” it says.

The Harris Center for the Arts in Folsom announced in June that it will remain closed until at least next July.

And the Mondavi Center at UC Davis doesn’t plan to resume live performances until at least mid-January—and only after county and state officials have allowed gatherings in entertainment venues and its reopening plan has been approved by the UC Davis Environmental Health and Safety. It also says that “Mondavi Center is not set up to adequately accommodate or enforce social or physical distancing with large crowds.”

UPDATE: On Oct. 16, the Sacramento Philharmonic & Opera announced an agreement with its musicians that “allows maximum artistic flexibility, important as the SP&O explores programming possibilities for 2021.” “The renovated SAFE Credit Union Performing Arts Center is set to re-open in the spring of 2021, and the SP&O is preparing to resume concerts in this space the moment COVID restrictions ease,” it said in a statement.

In the meantime, the Philharmonic & Opera is presenting a fall digital chamber music series that starts Nov. 21 and continues Dec. 5, 12 and 19.

Before the Sacramento City Council approved another $6.9 million in federal coronavirus relief money for arts groups on Sept. 1, supporters sent in a form letter pointing out that they had to close their doors, furlough hundreds of employees and cancel exhibits, concerts and performances.

“Faced with the very real prospect that mass gatherings may not be possible until 2021, local arts organizations and artists will spend almost a year with very little, if any, income,” they warned. Without more financial support, the letter said, many groups “face the real prospect of becoming the next casualties of COVID-19.”

Overall, the city invested $19.8 million of its $89.6 million in federal CARES Act money into the arts, creative economy and tourism. The city says its assistance program for the arts is one of the country’s largest and double that of Los Angeles County.

The letter also says that 40% of arts groups nationally believe they will not make it through the pandemic. Theater owners on Broadway have decided to stay dark until at least January.

UPDATE: The Broadway League announced Oct. 9 that the shutdown will continue until at least late May. Plays and musicals shut down in mid-March, when New York was emerging as the nation’s first COVID-19 epicenter.

Since, New York has contained the virus—something that California and Sacramento are still trying to do. Despite President Trump pushing for warp-speed approval and rollout of a vaccine, his top public health officials say it will be mid-2021 before one is available to the general public. Given the concerns of theatergoers, major arts groups here may need to wait well into next year before the show can go on.

Be the first to comment on "When will the show go on?"