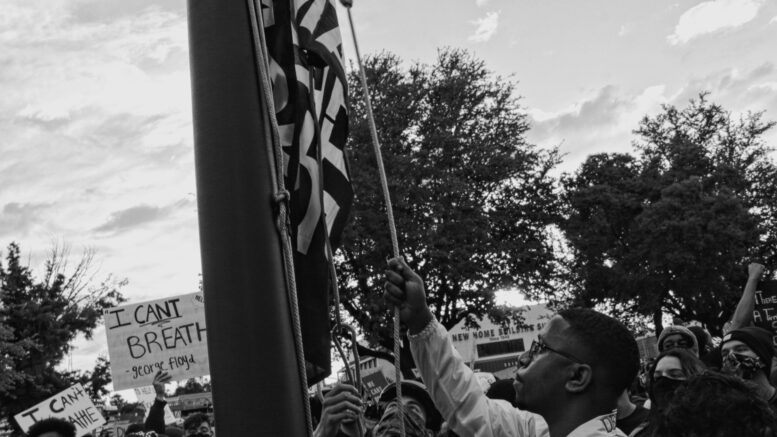 Protestors raise a Black Lives Matter flag at the Sacramento police station on Franklin Boulevard on May 29. (Photo by Kevin Gomez Jr.)

The deepest civil unrest in 50 years. The bleakest economy since the Great Depression. The deadliest pandemic in a century. The worst president in history. You don’t need a reporter to tell you things aren’t normal. Or that what passes for “normal” outstayed its welcome a long time ago.

If it’s true that we discover ourselves in times of crisis, there should be an awful lot of self-discovery happening right now.

Sometimes it feels like the opposite is occurring, like we’re getting better at lying to ourselves about the things we want to be true. And if you’re the sort of person who’s susceptible to self-deception—who believes that the coronavirus is overblown and that police brutality is exaggerated, that Gov. Newsom is deliberately tanking the economy and that President Trump cares about the small business owner, that ultraviolet rays kill COVID-19 and that cops only kill bad people—well, there’s probably a YouTube channel just for you.

But if the last four months have laid bare the emotional immaturity of the human ego, they have also documented the can-do resilience of the human spirit.

I think of Stevante Clark choosing to wade into another painful reckoning over police violence to minister to an anguish he knows intimately. I think of Katie Valenzuela challenging a City Council she hasn’t yet joined to move faster and more forcefully to deprioritize traditional policing. I think of Caity Maple raising money and a posse to deliver clean water to homeless camps before City Hall and county government got their COVID-19 acts together. I think of George Floyd’s daughter speaking a wish into reality.

I think of countless examples of bold, rational, kind leadership—and guess what? Most aren’t trickling down from our leaders. They’re carried upward by you, the marching, organizing, volunteering majority.

I don’t know if the long arc of history truly bends toward justice or if it ultimately collapses into a fatal loop. But I don’t believe the story of 2020 ends with thousands of unmourned deaths a day. Or with systems that shrug off white riots for haircuts while allowing George Floyd to be strangled on a daylit street. I don’t believe the story ends with Reggie Payne going limp because a paramedic wouldn’t shake his hand.

The idea for a yearbook feature was born out of a shared ambivalence about our unresolved now. Yearbooks bind the past into tidy chapters, but they also ask us to dream outside the margins. They’re tacit promises that a future is coming. It’s a nice thought, but one that only becomes true by your grace.

Each one of you is writing the future as you breathe. You’re writing it for those who no longer can. What do you want it to say?

Be the first to comment on "This is your moment"