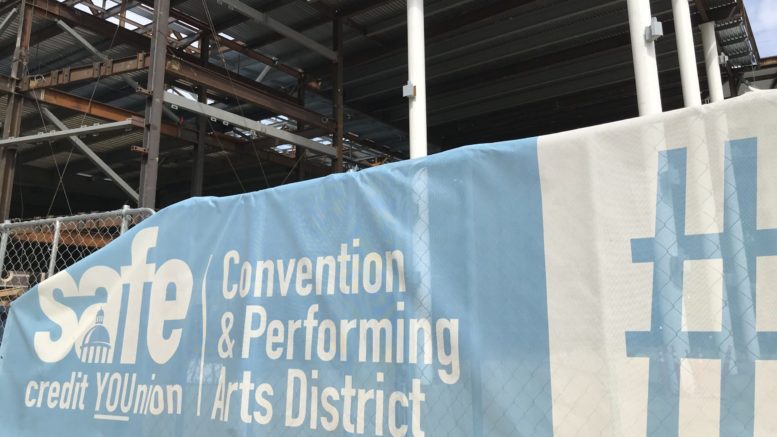 Construction is on schedule for the Sacramento Convention Center expansion, but how busy will it be if the COVID-19 pandemic persists? (Photo by Foon Rhee)

It took years of hard work and persuasion for tourism boosters and arts lovers to get the Sacramento Convention Center expanded and the Community Center Theater renovated.

And the timing seemed right for a city on the rise—to bring bigger and better meetings and shows, and to boost downtown Sacramento as a place to work, live and play.

Then the COVID-19 pandemic happened.

When the new buildings open late this year or early next year, the world will look very different from when the City Council gave the go-ahead in September 2018 to borrow $285 million for the two projects.

It’s unclear when stay-at-home orders will be fully lifted and business and life can resume anywhere close to normal. Sacramento’s major arts groups had to cancel their seasons, and until there’s an effective vaccine for the deadly virus, theatergoers may not be rushing to attend live performances. And with many major companies and organizations canceling travel, who knows when the convention business will come back.

On May 5, the City Council approved the latest change orders to the contracts for the Safe Credit Union Performing Arts Center and the Safe Credit Union Convention Center, a name that has taken on new significance (the credit union is paying nearly $23 million over 25 years for naming rights). The item was on the consent agenda, so it was supposed to be routine. And no council member commented.

There’s no mention of the pandemic in the staff report. And a lot could change, for better or worse, by the end of the year. Still, it’s not too soon for someone on the council to ask some tough questions. For instance:

What are other potential uses for the convention center if major meetings don’t happen?

If seating capacity in the theater must be limited for social distancing, would the city subsidize tickets to keep prices affordable while making up lost revenue for arts groups?

What’s the back-up financing plan if the number of visitors to Sacramento doesn’t meet projections?

Are the economic impact projections even valid? The city had predicted at least $22 million a year return on its investment. Visit Sacramento says that meetings and conventions rang up an economic impact of $121 million in 2017.

“I believe that business will always be best done face-to-face, that people still want to travel to other cities for experiences that their hometown doesn’t offer and that our curious nature as humans won’t go away because of a fear of getting sick.”

The $196 million convention center expansion includes more exhibit space, meeting rooms and lobby space, plus a new ballroom and kitchen. The first conventions aren’t until December and January, but city and Visit Sacramento officials are already discussing the longer-term impact of COVID-19.

If the meetings aren’t canceled, they could be smaller, says Mike Testa, president and CEO of Visit Sacramento. He also says that the time before opening will be used to incorporate the guidance of health experts to keep delegates safe. For instance, sessions could be spread out beyond the center to nearby hotels and other venues and they could incorporate more live streaming from the home office.

Still, Testa said he believes that conventions will survive.

“I don’t think that this pandemic will create permanent changes that will dismantle the tourism industry forever,” he said via email. “I believe that business will always be best done face-to-face, that people still want to travel to other cities for experiences that their hometown doesn’t offer and that our curious nature as humans won’t go away because of a fear of getting sick. There will be a vaccine or other significant change that will remove the risk and fear and, until then, we will all adapt as best we can.”

At the theater, the $86 million renovation includes better acoustics, a nicer lobby and improved (and legally required) access for disabled patrons. The work was scheduled to be finished in mid-December, but could be delayed because the coronavirus crisis has affected the operations of some small specialty companies, said Fran Halbakken, the city’s project manager.

Dennis Mangers, a strategic adviser in Mayor Darrell Steinberg’s office who focuses on the arts, said there are already intense discussions among city officials and local and national theater leaders about how to safely put on performances. For example, patrons may have their temperatures tested before entering and be required to enter and exit in smaller groups. There might be no intermissions to prevent people from congregating.

While Mangers said much depends on whether there’s a second wave of COVID-19 in the fall and winter, he’s confident that the leaders of Broadway Sacramento and other arts groups will make “sensible decisions.”

And despite the pandemic, Mangers said, the convention center and theater projects will pay off in the long run.

“I still believe these were smart, strategic investments for the city,” he told me.

At this point, the city has little choice but to move ahead and hope for the best.

It borrowed a little more than $300 million for the two projects, plus the $16 million renovation of Memorial Auditorium, which reopened in May 2019. To pay back the bonds over 30 years, the city is using a portion of its hotel taxes.

At the same time, debt payments for the projects will rise from $15.4 million in 2019-20 to $21.7 million in 2020-21. And because the center and theater are closed during construction, that means the deficit—which includes operating costs—is projected to increase from $6.3 million to $27.8 million.

Interest rates have dropped, so it might seem a good time to refinance the bonds for lower payments. But the city treasurer’s office says that the municipal bond market has tanked during the pandemic and that investors are wary of the convention industry in particular. So refinancing the bonds would be too costly, if even possible.

The treasurer’s office, however, is considering offers to extend bond payments now due in 2020-22 in case cash flow becomes a problem.

At worst, if business travel and live performances don’t rebound eventually, the city might have to rescue local arts groups and dip into other budget accounts, including the general fund that pays for basic services.

At best, the theater and convention center will be busy, but people will be wearing masks and interacting very differently than before the pandemic.