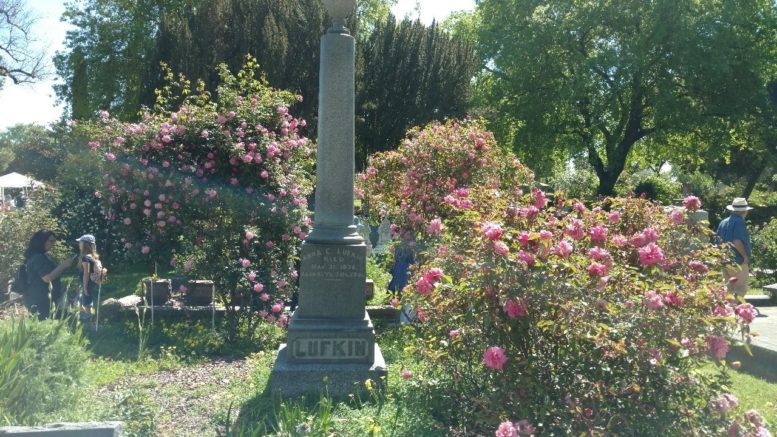 A prickly situation has sprung up in Sacramento’s most famous rose garden.

Volunteers at the Historic City Cemetery–home to the 500-bush Heritage Rose Garden as well as two other major gardens–have balked at signing a new six-page agreement outlining the details of their service.

Included are restrictions on contacting “news media or posting on social media concerning any cemetery activities or City Cemetery policies and procedures without written authorization” from city officials.

In addition, any volunteer’s concerns must be routed through city staff. The agreement reads: “I understand that even though I may not agree with their response, I will respect and abide by their decision and directives.”

After a very public battle three years ago over the future of the cemetery gardens, volunteers interpreted this restriction as a gag order.

“They’ve already lost volunteers,” said Jen Holden, a former volunteer. “The ones left signed the agreement and can’t talk to the media. They’re not allowed to take photos of volunteer work and post on social media. They’re volunteering in a public space, not in authorized areas. … This is a 100 percent power play.”

Among those who refused to sign and is no longer volunteering is Heritage Rose Garden curator Anita Clevenger, a volunteer since 2003.

Word of the new volunteer guidelines quickly spread through Sacramento’s garden community. Volunteers at William Land Park and McKinley Park worry that the guidelines will be applied to them, too.

“It’s perhaps the clearest violation of the First Amendment right to free speech as I’ve ever encountered,” said Craig Powell, a retired attorney and leader of the Land Park Volunteer Corps, as well as Eye on Sacramento, a City Hall watchdog. “It’s also unbelievably dumb.”

In its 10th season, the Land Park corps puts 75 to 200 volunteers to work every month, pulling weeds, renovating planting beds and performing other garden tasks in the city’s largest park.

“If city officials tried to impose such rules on the corps, I would expect that our board of directors, myself included, would resign en masse and/or initiate a lawsuit against the city for suppression of our First Amendment freedoms,” Powell said.

Judy McClaver, a longtime volunteer at McKinley Park, received a warning from the city that her volunteer status could be suspended for failing to follow the chain of command after she complained to elected officials about two bodies found in the pond.

“Who will do the work?” McClaver said. “This is neighbors looking after their parks that the city does not do.”

The backlash has city officials pledging to take another look at the agreement’s language.

“The City of Sacramento greatly values its volunteers, including those who donate their time, energy and expertise to the City Cemetery,” spokesman Tim Swanson said in a statement. “The City plans to take a close look at the form to make sure its language is clear and responsive to everyone’s needs.”

Councilman Steve Hansen, whose district includes the cemetery, has heard the volunteers’ concerns. “There should be no gag orders on volunteers,” he said.

Hansen noted the city plans to hire a new cemetery manager who will work with the volunteers.

“In the end, everybody should be treated with respect,” Hansen said. “We want a beautiful historic cemetery with a rose garden and all the staff that makes it special.”