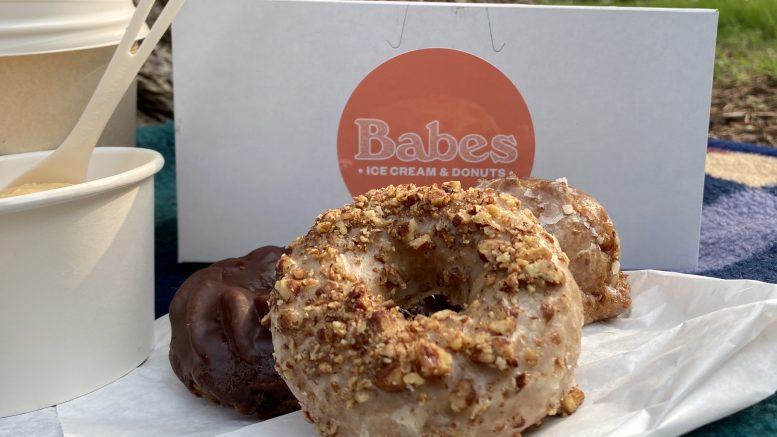 Babes' donuts are one of a myriad of omni-enticing vegan sweets in town.

When Planet V started this year with a quick-hit list of vegan donuts in town, SN&R immediately got feedback about a glaring omission: Pushkin’s Bakery—and not just Pushkin’s, but its upcoming offshoot, Babes Ice Cream & Donuts.

It’s true: I’d never braved the long lines for Pushkin’s Sunday-only donut offerings, and while the bakery texted donut hunters in advance, none of those texts ever actually reached me. Between the limitations of word count and my lack of knowledge of their product, Pushkin’s was left off the list.

As for Babes, its announcement via Instagram hit just as the paper went to print, and coronavirus-related delays slowed their opening, but I’ve been eagerly awaiting a chance to give its donuts a try. This is not an overstatement: If ever there was a time I needed all vegan, all gluten-free donuts and ice cream, that time is now.

Babes opened its storefront at 2417 J Street on Labor Day weekend, and once the crowds dissipated, I stopped in.

If you’ve been a Pushkin’s evangelist, my donut takes are likely old news for you. It was tough for me to decide, but I gave the Maple Pecan and Chocolate Cruller a try, along with the Apple Fritter. The Maple Pecan was perfect for my purposes: nicely coated but not overdone, and with a little shake, the perfect donut to dip into my coffee. The Cruller had a nice outer firmness and a tiny crunch as the bite gave way to a soft but dense inner core.

The Apple Fritter was good, but my least favorite. It’s just a matter of preference: I like fritters that are flat, where finding a chunk of apple is like finding buried treasure. I like my fritters with a sense of adventure. The Pushkin’s/Babes fritter is a bit different: large chunks of seasoned apple within a dome just under the size of a fist. Think donut bon-bon.

As for the ice cream: it’s fantastic. Go get some, now. In all of my vegan years, I’ve never been able to track down truly great pistachio ice cream, and Babes has it. My quest for vegan pistachio ice cream has been an active endeavor—not an “Oh, I wish” musing, but a quest that involved emailing large corporations to find out if their pistachio versions were available locally (answer: shrug) to being disappointed by the versions I did find.

Babes’ pistachio has the smoothness and creaminess that you remember “real” ice cream having. It melts like the dairy version would, and there’s no grit to it—a malady suffered by many other ice creams.

It may have taken Babes eight months to open, but it’s been well worth the wait.