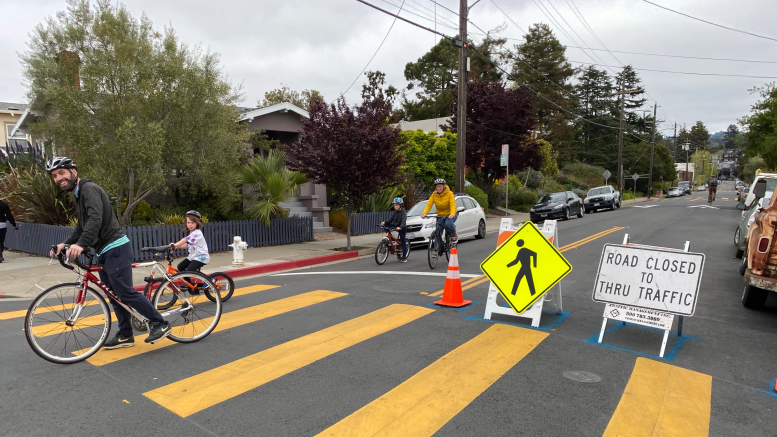 Oakland and other cities have closed parts of some residential streets to make room for bicyclists and pedestrians during the COVID-19 pandemic stay-at-home orders. (Photo from city of Oakland)

Essay: When the protests started in Sacramento, it made sense to take another look at the project.

It was early March when I contacted a city transportation planner and asked, “What does Sacramento have going on around a slow streets project during the pandemic?”

I had recently read that Oakland was on track to “slow” 75 miles of streets, and other cities were quickly following suit. At that time, Sacramento’s streets had gone from crowded and congested to empty. Most everyone was “sheltering in place” and transportation advocates nationwide were seizing on this moment to embrace a change in how their cities streets were used.

City Hall set up a potential pilot project with the following parameters: streets needed to have low traffic volumes with a 25 mph speed limit, the streets could not obstruct emergency vehicles and the first were to be in underserved neighborhoods.

Sacramento Area Bicycle Advocates, WalkSacramento and the organizations that signed onto a letter to Mayor Darrell Steinberg pushed to slow streets in areas where bike/pedestrian projects were already underway.

Why not focus on locations already identified as high-crash corridors: Broadway, Stockton Boulevard, Franklin Boulevard or Florin Road? In these communities, a public engagement process was already in play, and plans and projects were underway that could perhaps include a “slow streets” pilot. On May 29, SABA and WalkSacramento offered up three streets for implementation given the city’s parameters.

Then, over that weekend, the George Floyd protests began and the curfew was enacted. People took to the streets to let everyone know that Black Lives Matter; the streets were the place to give voice to fighting systemic racism and injustice.

We were also becoming aware of the unintended impacts that slow streets have had in communities of color in other cities, where implementation often occurred too quickly and with little to no input.

On reflection, we have learned that having a strong foundation of engagement already in place will go farther. The city has issued a statement that it will work to improve and deepen relationships with the neighborhoods it had hoped would benefit from slow streets, with the goal of better understanding transportation needs more broadly.

“We were also becoming aware of the unintended impacts that slow streets have had in communities of color in other cities, where implementation often occurred too quickly and with little to no input.”

We’ve also been reminded to think systemically. Instead of focusing on one tool in the transportation redesign toolkit, we believe that improving mobility and providing safe transportation options should be the ultimate goal, whether that looks like high-quality transit, micro-mobility, trip-matching or slow streets.

Slowing streets in Sacramento still has potential, especially if the city is to meet its climate action commitments. From early March to mid-April, traffic volumes in Sacramento dropped 74% due to stay-at-home orders. There were multiple reports on how clear the air was, providing a glimpse of what our air quality could be if residents do not reach for their car keys as more businesses reopen.

Cleaner air and less congestion make a difference in the quality of health for everyone, but especially for disadvantaged communities. Traffic is slowly returning to levels before COVID-19, an almost a 50% increase in cars on our roads since mid-April.

In this time of response and recovery, we need to be intentional about meeting people’s transportation needs, whether that includes slow streets, public transit or some other solution. However, it is clear that the way forward cannot rely on single-occupancy car travel. We need to double down on providing transportation choices for everyone who cannot drive or who would prefer not to, for whatever reason.

We need our leaders to move forward, and to get all of Sacramento moving forward equitably for the health and well-being of our most vulnerable residents.

Cartoon: Safe to go out?

Be the first to comment on "Slow start for ‘slow streets’"