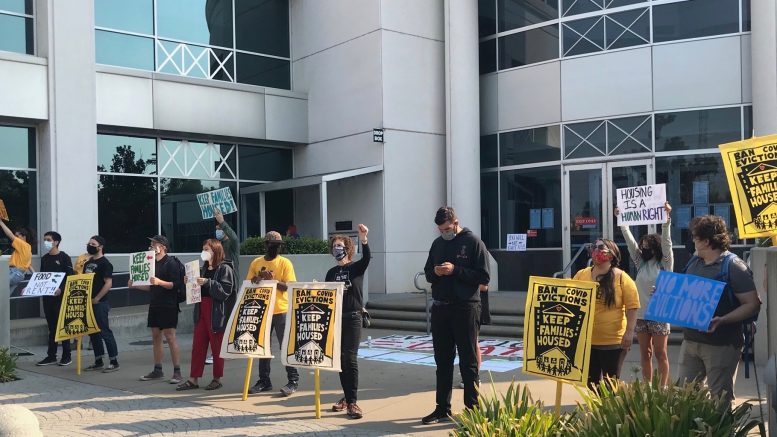 Protestors with the newly formed Sacramento Eviction Defense Network line up in front of the Carol Miller Courthouse on Sept. 2. (Photo by Scott Thomas Anderson)

On the first day that California’s eviction courts reopened, landlords pulling up to the Carol Miller Courthouse in Sacramento were met by a crowd of protestors in front of the doors. Anyone planning to drop off an unlawful detainer order, better known as an eviction filing, would have to press through a gauntlet of chanting demonstrators.

Most landlords opted to drive away.

Economic fallout from COVID-19 has prompted similar scenes across the nation. Residents of New Orleans have been regularly blocking the doors to the city’s eviction court since July. Protestors in Los Angles began doing the same last month. When Sacramento’s court reopened Sept. 2, the crowd of roughly 50 people joining the broader movement were part of a newly formed Eviction Defense Network. The organization came together as a direct result of the compromise Gov. Gavin Newsom oversaw to extend California’s eviction moratorium, a deal that housing advocates across the state have decried as a betrayal of working people.

Sacramento had already been experiencing skyrocketing rents and frequent evictions before the COVID-19 lockdown robbed so many of their livelihoods. Now, members of the Eviction Defense Network say the actions of the governor and Legislature have created a scenario where only grassroots efforts can stave off a major escalation of homelessness.

“A lot of places aren’t accepting new people because of the pandemic,” said Ezra Brooks, a member of a housing collective in the new network. “Right now, I’m paying a friend to stay on their couch while I heal from my surgery, but I’ll be back on the streets Friday after I get my dressings off.”

The Mercedes and the bullhorn

The renters and advocates lining up in front of Sacramento’s courthouse incorporated a “know your rights” event into their demonstration. Elliot Stevenson of the Sacramento Tenants Union used a bullhorn to explain the legal protections tenants can seek if they’re hit with an unlawful detainer. Around 9:15 a.m., while Stevenson was explaining the differences between state and federal protections, or lack thereof, a man pulled up to the courthouse in a luxury sedan and prepared to put an unlawful detainer notice in the building’s drop box.

“On the first day the courts open, they drive down here in their Mercedes to evict people,” Stevenson shouted into the bullhorn. “How do you wear a mask and stay socially distanced when your being thrown out of your home?”

The crowd started chanting, “Keep families in their homes.”

Thirty minutes later, another landlord, who declined to give her name, told SN&R that the eviction she was pursuing had nothing to do with the pandemic. “My tenant stopped paying her rent in December,” she said. Looking at the crowd blocking the door, she added, “Maybe I’ll pretend I’m going to traffic court.”

Noncorporate landlords like her would have qualified for financial assistance under the bill that San Francisco Assemblyman David Chiu spent weeks fighting to get to the governor’s desk. But with the compromise that was brokered by the governor’s office in the 11th hour, that stipulation was dropped.

Now, housing advocates say Sacramento’s eviction courts will undoubtedly be swamped with mom-and-pop landlords trying to hold on to their properties by seeking money from renters who have lost their jobs in the lockdown and have no ability to pay.

Ben Hadley of the Sacramento Tenants Union says the failures at the state level are what’s responsible for bringing the drama to the doors of the courthouse.

“We’ve seen time and again the last few months that we can’t wait for our elected officials to do what it takes to actually keep people in their homes,” Hadley said. “We know landlords are going to try to get around the new milquetoast protections, which have a bunch of loopholes.”

Hadley said the Eviction Defense Network plans to hold blockades at tenants’ homes and offer direct support to those going through the eviction process in court.

The network is currently comprised of the tenants union, the Alliance of Californians for Community Empowerment, the Trans and NonBinary Housing Collective and NorCal Resist. It is actively working to recruit more people.

“Tenants are rising up all over the country,” Hadley said.

Chui’s Assembly Bill 1436 had sought to prevent two separate, but related, realities from taking place. It would have protected Californians from eviction for non-payment of rent for at least a year after COVID-19’s state of emergency was lifted, thus eliminating the tidal wave of evictions that analysts have predicted since April. Meanwhile, the mortgage relief for qualifying landlords would have stopped the kind of cascading foreclosures that happened during the Great Recession, which then allowed the private equity firm Blackstone Group to become a dominate corporate landlord in Sacramento and the second largest property owner in the county.

Critics of AB 3088, the compromise bill that replaced Chui’s legislation, say there is nothing but uncertainty on either of those fronts now.

AB 3088 states that tenants must pay at least 25% of their rent between now and the end of January to be shielded from eviction. That protection is only valid if the renter files a declaration of hardship by Oct. 5, a provision many will likely not know about until it’s too late. Without further action, on Feb. 1, tenants must pay their rent in full again.

Shanti Singh, communications coordinator for the statewide group Tenants Together, said lawmakers are recklessly banking on a hope that a rapid, “V-shaped recovery” will happen in the state’s economy, and that this recovery will filter down immediately to Californians who were living paycheck to paycheck prior to the pandemic.

“We’re already getting calls from people who can’t pay that 25%,” Singh said. “There is no recourse for them, whatsoever … The working poor are out in the cold right now.”

Tenants Together also asserts that, under AB 3088, the brief window to file for renters to file for hardship—and landlord’s right to do “means testing” on such filings—will lead to widespread confusion and conflict.

“There’s an enormous burden that’s being put on tenants,” Singh added. “It’s so onerous that many are probably going to find themselves trying straighten it out with their landlords in court.”

Chui’s bill had enjoyed support from most large city mayors across California, including Sacramento Mayor Darrell Steinberg. In the end, that wasn’t enough to get it over the finish line.

Santa Barbara State Senator Hannah-Beth Jackson, who was part of the negotiations, told The Santa Barbara Independent that the landlord lobby was open to greater protections for tenants, but it was stopped in its tracks by the banks.

“The banks said, ‘No, we’re not going to accommodate anyone unless we feel like it,’” Jackson told The Independent.

Singh said the failure of the governor to push back on the banks will have devastating effects once the Feb. 1 deadline to start paying rent in full arrives. That timeline also won’t give the Legislature a window to take further action, nor would a potential Biden administration have meaningful time to act before an eviction avalanche starts. Tenants Together and other housing advocates want Newsom reconsider taking an executive action via the powers he has during a public health emergency.

“Gavin Newsom could make all of this misery go away,” Singh said. “This is going to make the poorest people homeless. It’s really shameful.”

Be the first to comment on "The fight at the door"