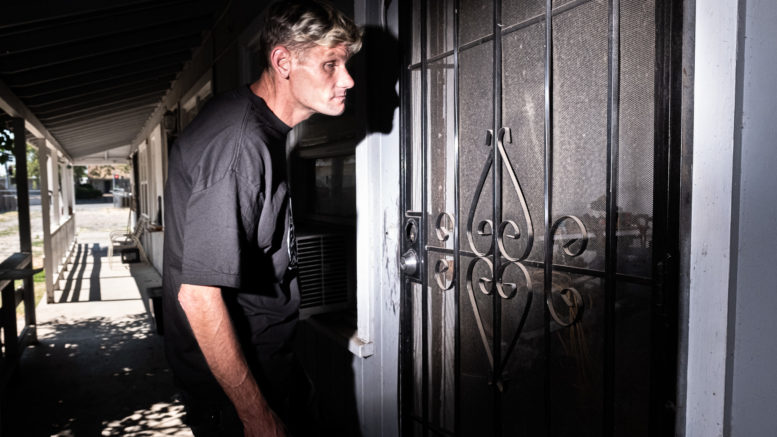 Michael Perrault, a developmentally disabled renter, surveys the apartment from which he was recently evicted.

In a city with few tenant protections, such stories have become common enough that Mayor Darrell Steinberg recently alluded to the area’s “affordability crisis” in a speech about spiking homeless statistics. From City Hall to the steps of the state Capitol, political gridlock around the state’s housing crunch has yielded ever-bleaker reports.

Extremely low-income families have been hit particularly hard, but people including Orcini’s brother, Michael Perrault, represent an even more vulnerable category of renter. Since 2017, local nonprofits for the physically and developmentally disabled have warned that their resources are stretched to capacity. Andrea Croom, director of InAlliance, says some people have been waiting three years to get into her agency’s housing program for the severely disabled.

“Our ability to take new clients has stalled,” Croom said.

Last week, Housing Now’s Patti Uplinger told SN&R the situation for disabled renters is, generally, as challenging as ever.

“I just read the report that Sacramento came in as one of the highest cities in the nation for year-to-year rent hikes, for the third year in a row,” Uplinger said. “I can just look back to last October when I was working with Sacramento Self-Help Housing to get people into the county’s shelter system. Most of the people we took off the streets, and off the river, were seniors with disabilities.”

That reality might be hard for some in the public to envision. For Orcini, it’s a reality that his brother is living every day now.

“It worries me,” Orcini admitted. “It’s not safe or easy for him to be out on those streets.”

On a Wednesday morning in June, the lobby for the courtroom that handles evictions in Sacramento County was full.

One person who has had trouble navigating the system is Perrault, who’s actually something closer to Orcini’s adopted brother. Orcini was friends with Perrault’s parents for 15 years before Perrault’s mother, Ellen, died of cancer in 2008. When Perrault’s father, John, got sick with an infection in 2012, he asked Orcini to look out for his son.

Orcini says that Perrault, 38, has the comprehension of a teenager. Perrault describes himself as having cognitive challenges and a significant learning disability, which led his father to set up a special needs trust for him.

For a few years after his father passed, Perrault tried living with extended family. He clashed with relatives about how they handled his late parents’ property and says they started talking about putting him in an institution. That’s when Orcini stepped in to become Perrault’s roommate, allowing him to be semi-independent. The two moved into a small, run-down apartment attached to a four-plex on Del Paso Boulevard.

Between 2016 and 2019, Orcini and Perrault lived in the unit without problems. Then, in January, county records show the complex was purchased by Roseville-based landlord Shahab Riahi.

Orcini and Perrault soon complained to Riahi about a host of maintenance issues, including backed-up toilets, black mold, rats under the floors and a roach infestation. They say their neighbor Robert Gavey, a military veteran and professional truck driver, also complained about the conditions. According to Orcini and Perrault, Riahi was slow to fix problems, but it only took him a few months to hit them with a $200 rent hike. That boosted their monthly payment to $900 for a roughly 600-square-foot, one-bedroom apartment in a high-crime neighborhood. (Sacramento police got into a gunfight with a gang member in front of their driveway in 2016).

Worse yet, Perrault says Riahi came by and pressured him to sign papers agreeing to the rent increase while Orcini was away on a trip.

“I told him I’m not going to sign anything unless it’s read to me and I understand what it is,” Perrault recalled with frustration. “And he said to me, ’If you don’t sign this right now, I’ll give you a three-day notice and you’ll have to leave.’”

Perrault says he believed he had no choice, even though he told Riahi he didn’t know what he was signing. He also remembers Riahi warning him that once the litany of issues got solved, the rent would be going up to $1,200 a month.

The rent hike was in March. Orcini and Perrault were already behind on their payment because someone broke into their unit and stole $500 in cash from Perrault. (Perrault gets SSI, Social Security income and some survivor’s benefits, totaling about $1,500 a month).

In April, the roommates say they had Riahi’s rent, plus some of the back rent. Their landlord didn’t want it. Instead, he handed them a three-day notice to pay the whole amount or be evicted. They were evicted.

Riahi also evicted Gavey, who could not be reached for comment.

Reached by phone, Riahi told SN&R that Perrault, Orcini and Gavey were all behind on rent and evicted on the advice of his attorney. Riahi pointed out that, in the case of Perrault and Orcini, the judge in their eviction case sided with him. Riahi also said he didn’t see any problem with having Perrault sign papers when he was alone since Orcini frequently messaged the landlord.

Orcini started living in his truck. At first, Perrault stayed with a friend. Worried he was becoming a burden, Perrault started camping in a tent in Hagginwood Park. He says two strangers tried to rob him and threatened his life. At that point, another friend let Perrault move temporarily into his garage.

So far, Perrault has struggled to understand how he can get access to the special needs trust his father left him. He and Orcini showed SN&R a confusing series of emails from the law firm administering the trust. It has become even more difficult while dealing with the stress of being homeless.

“I’m trying to figure things out for myself, but what happened to Michael is truly wrong,” Orcini said.

Does anyone in power truly stand with renters?

That question has echoed across California as one governmental body after another yields to pressure from the real estate lobby to block tenant relief initiatives.

Democrats introduced a slate of new bills in 2019 aimed at giving tenants a fighting chance to avoid unfair evictions and displacement. The Orange County Register published an editorial assailing all of these proposals. Entitled “Sacramento’s war on landlords will only worsen the housing shortage,” the editorial decried the would-be tenant protections as “the greatest assault on property rights in the history of the state.” The Register furthered argued that any state where the government is so restrictive with rental pricing but not costs will discourage construction of new housing units.

But after spending the year investigating the nation’s eviction epidemic for her series “The Scarlet Letter,” On the Media’s Brooke Gladstone had a different take. She argues unemployment and a lack of available housing aren’t the biggest drivers of the housing crisis, but rather years of stagnating incomes weighed against soaring rents.

“It turns out it’s not so much about poverty as it is about extracting wealth from people who earn the lowest wages … by charging more for less,” Gladstone said in her series.

For tenants whose personal experiences make that last statement ring true, this year’s political battles have so far been a mixed bag.

Assemblyman David Chiu’s AB 1482, which would bar single-year rent increases from being more than the Consumer Price Index plus 5%, was still active as of press time. Another bill, AB 329, is also still alive. It’s aimed at prohibiting landlords from discriminating against tenants who rely on Section 8 vouchers.

In the last three years, Sacramento County’s elected officials have heard myriad stories of disabled residents and low-income families having Section 8 vouchers that no one will take. Croom said that even if AB 329 passes, the severely disabled clients at InAlliance will still face an uphill battle because their only income is SSI.

“If your voucher is for $600, try finding a place for $600,” Croom said. “They still have to meet the same requirements any renter would have to in terms of a down payment and income.”

Of all the different tenant protection bills introduced during the recent housing crisis, none included language that would give physically and developmentally disabled renters special protection from no-cause or greed-motivated evictions. Uplinger, who has worked with the disabled for years, does not recall any lawmaker trying to champion that type of safeguard.

That means disabled renters who haven’t made it into a nonprofit program are on their own. It’s a realization that hit home for Perrault last week when he brought SN&R to his former apartment and discovered Riahi had thrown many of his possessions into a Dumpster.

“It’s been hard, painful and scary,” Perrault said of the last few months. “I never thought in my wildest dreams and in my life that after I lost my parents it would come to this point. I never thought I’d be homeless.”

Essay: Sacramentans’ incomes are being used for a new form of red-lining – and our leaders have let it happen