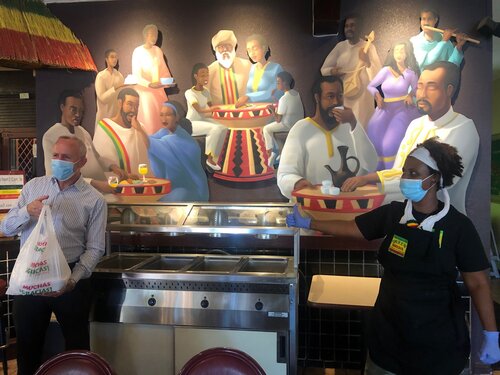 Editor’s note: The City Council is handing out the last of $89 million in federal aid. It’s up to the city auditor to make sure it isn’t wasted.

It’s a lot more fun to spend money than to check back whether it was really worth it.

The same holds true for local government—which brings us to the Sacramento City Council, which at its meeting Tuesday had blown through all but $2,379 of the $89.6 million in federal COVID-19 relief money it received in late April.

On Tuesday’s agenda, there’s $3.1 million for youth programs, $1.3 million for five groups for arts education and $790,000 to put 12 mobile restrooms in the River District.

Mayor Darrell Steinberg and council members like to brag about getting the CARES Act cash out to arts groups, small businesses, community organizations, nonprofits and others to help them get through the pandemic.

But with so much money going out so fast, are the chances higher for waste or fraud?

“There’s definitely going to be a risk,” said City Auditor Jorge Oseguera. “We need to be vigilant.”

He told me that while the city wanted to help as quickly as possible and make the money available to as many groups as possible, that makes it more challenging to oversee the spending.

Some contracts of more than $1 million have been approved by the council without the usual minimum of 10 days for public review. To prevent problems, the auditor’s office has been working with city departments to identify any risks in requests for proposals and grant agreements. To discourage waste or fraud, the auditor will track expenses and investigate whistleblower complaints.

Oseguera said one primary concern is that federal guidance on what is an allowable expense is not completely clear. The city will eventually be audited by the feds; to avoid having to repay any money, it must prove the cash has been used “efficiently and effectively.”

While the city has less control over spending when it’s an outside program, the contracts include a provision that allows the city manager terminate them early if the group doesn’t follow federal guidelines, has misrepresented any information or is involved in litigation. Oseguera said his office will check that the early termination clause is in every contract.

“There’s definitely going to be a risk. We need to be vigilant.”

While the auditor is the first line of defense, council members need to take all this seriously.

So it’s a little worrisome that on Sept. 1, a council committee spent less than five minutes on the auditor’s first report on COVID-19 spending, just before the council approved $5.4 million to keep Visit Sacramento afloat, plus another $6.9 million to help 300 arts and culture groups and individuals.

Don’t get me wrong: It was the right move to get the money into the community quickly. The money has to be spent by the end of the year, so there was time pressure. The cash will circulate through the city and boost the local economy. And most of the programs receiving cash seem worthy enough, though some initiatives seem rather vague and appear to overlap.

Look at the three youth initiatives approved by the council on Tuesday, for instance. The goal of a $1.3 million Sierra Health Foundation program is to promote youths’ social and emotional well-being through multiple weekly virtual activities, including recreational, social and academic, according to the city staff report.

A $1.3 million contract with PRO Youth & Families calls for a fall citywide out-of-school program for youth that “engages them in critical learning and addresses social isolation by connecting them to mental health training and supports,” the staff report says.

And a $500,000 contract with Natomas Unified School District proposes day camps until at least Nov. 20 to provide academic and social-emotional support to 360 at-risk students struggling with distance learning.

At the same time, the city is spending nearly $1.5 million for its own all-day academic support program at four community centers.

The city has taken a far different tack than Sacramento County, which has taken quite a bit of heat for using a lion’s share of its $181 million in CARES Act money to shore up its existing budget and avoid service cuts or layoffs—and not on direct aid to people and businesses or on public health. Under pressure, the Board of Supervisors did boost Public Health spending by $45 million to fight coronavirus.

“I’m proud that here in the City of Sacramento we have put our CARES Act money out to work in our community by providing relief to small businesses, support to the arts, culture and tourism, funding to house the homeless and training for our young people and adults,” Steinberg said in a statement. “This was money well spent both to mitigate the short-term pain caused by the COVID and to put us in a position to regain our momentum once we fully reopen.”

Steinberg told the council that the CARES Act money is a “jolt of hope” to struggling residents and neighborhoods. In coming days, the mayor’s office plans to put out more information to the public “to put a human face on where these dollars are going.”

That’s great, but it’s no substitute for hard-nosed, green-eyeshade audits.

Be the first to comment on "Sacramento’s spending spree"