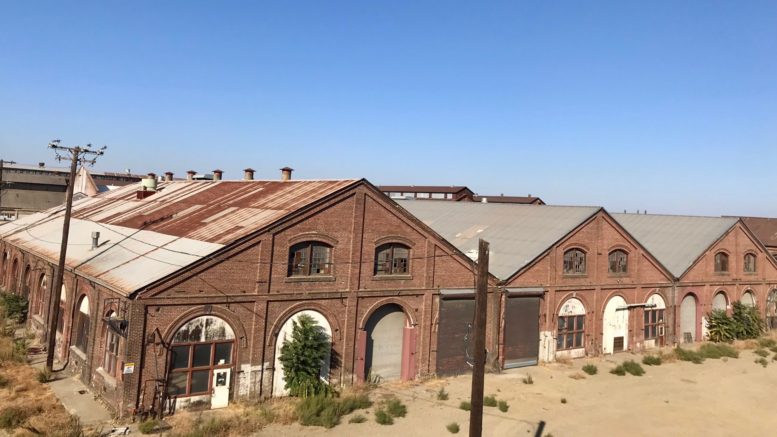 In December 2016, the City Council voted to allow the railyards project, which will be the largest urban infill development west of the Mississippi, to be built with only 6% for affordable homes. (Photo by Scott Thomas Anderson)

Grassroots volunteers fight for Prop. 21 in the face of $80 million opposition campaign

State Assembly members Richard Bloom and David Chiu attempted to end the law with a bill in January 2018, only for their effort to die by one vote in committee. That November, advocates went straight to voters for a repeal through Proposition 10, which landlords and real estate interests spent nearly $80 million to soundly defeat, 59% to 41%.

Now, tenant groups are making their case to kill Costa-Hawkins again with Prop. 21, asking voters to reconsider during the unemployment and economic hardship caused by the COVID-19 pandemic.

Those advocates will spend the last week of the campaign armed with a new report indicating that the wealth gap in California has widened at lightning speed during the coronavirus outbreak. Whether voters support Prop. 21 also greatly affects how Sacramento’s Measure C will be implemented, if it passes.

The report was compiled by Americans for Tax Fairness, the Institute for Policy Studies and the Alliance of Californians for Community Empowerment Institute. Analyzing data from Forbes magazine, the organizations found that the wealth of California’s 161 billionaires collectively rose by $312.8 billion since mid-March, roughly the beginning of the pandemic. Individual standouts include Mark Zuckerberg, whose wealth reportedly grew from $54.7 billion on March 18 to $101 billion on Oct. 13—an increase of 85%. Another was Elon Musk, whose wealth reportedly grew from $24.6 billion to $92.8 billion – an increase of 277%.

Though not based in California, Jeff Bezos, owner of Amazon, which profited from small businesses across the state being forced to close for weeks or months, saw his wealth grow from $113 billion to $203 billion.

Meanwhile, according to the U.S. Department of Labor, nearly 9 million Californians lost their jobs between March 21 and Sept. 26, and 2.8 million were collecting unemployment as of late September.

The authors of the new report also cite a late August analysis by MSN Money, which determined that 14,050 businesses in California had permanently closed, while 15,301 were still temporarily closed.

Without more federal relief, the toll of the crisis is becoming apparent for California tenants, 15% of whom reported being behind on their September rent payment, according to the Center on Budget and Policy Priorities.

Passing Prop. 21 would not enact rent control anywhere in the state. Rather it would neutralize the Costa-Hawkins law, which bars local rent control measures from applying to any apartments built after 1995, or to single-family rental homes, duplexes and many new developments.

A poll conducted by U.C. Berkeley’s Institute of Governmental Studies between Oct. 16 and 23 found that 37% of likely voters supported Prop. 21, but 48% opposed it and 15% were undecided. In the same poll in mid-September, 37% were in favor, 37% were opposed and 26% said they were undecided.

The real estate industry has raised nearly $84 million so far to defeat the measure.

Katie Valenzuela, Sacramento City Councilwoman-elect in District 4, is a strong supporter of Prop. 21 and says that its uncertain future has led to extremely deceptive ads from Sacramento landlord groups who oppose Measure C.

“The claims have been so grossly negligent from the opposition to these measures,” Valenzuela told SN&R. “They keep saying the measures will stop the building of new houses when they know perfectly well that Measure C, with Costa-Hawkins still in place, can’t apply to a whole array of housing. In that sense, none of these new buildings in the city are going to be affected by rent control.”

Bob Magnuson, spokesman for the No on C campaign, responded in a statement: “Measure C’s onerous rules and fees—and a Rent Board that creates a new government bureaucracy—will discourage the building of affordable housing for those who need it most. It’s the height of hypocrisy for Measure C backers to hide behind Costa-Hawkins, which they want to eliminate with Prop. 21, as providing protection against the adverse impact of their own ballot measure.”

Delphine Brody, co-founder of the Trans and Nonbinary Housing Collective who has been campaigning in Sacramento for Prop. 21, says one challenge is educating voters about the history of Costa-Hawkins.

“Most people are unaware of Costa-Hawkins and all of the harm it’s done over the years,” Brody said. “I tell people Prop. 21 is a way to get rent control and just-cause evictions into every community. It’s a full-time job at this point, but we do have a lot of volunteers now. We’re also hearing a lot of enthusiasm for Prop. 21 from the renters we speak with, so I think there’s real interest, despite all the money being spent to defeat it.”

As Valenzuela prepares to take office in December after defeating incumbent Steve Hansen in March, she continues to get calls and messages from desperate tenants across the city—people who are finding few resources as they face evictions triggered by the pandemic.

A statewide eviction moratorium is in place until Jan. 31, 2021, but renters must come up with 25% of the rent they owe from Sept. 1 through Jan. 31, and must pay back all missed rent by March 1. The city has also approved a $4.7 million rental assistance program; the deadline is Thursday to apply for as much as $4,000 in help.

Valenzuela stresses the stakes around Measure C and Prop. 21 could not be higher.

“We need to sound the alarm that the growing homeless crisis is related to rental affordability,” she said. “If you lose your job today, and have no income, you could defer your eviction for a while under COVID, but eventually you will lose that housing, and there’s no services available here to get you into a unit you can afford while you’re getting back on your feet.”