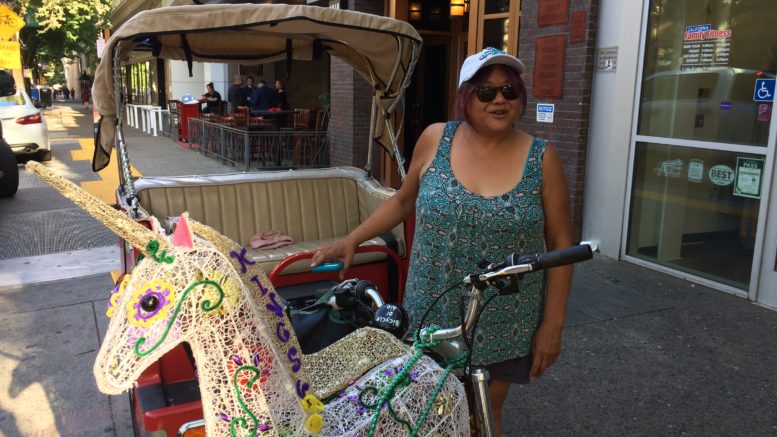 When Jeff Rembulat saw pedicabs in the Gaslamp Quarter while visiting downtown San Diego, he had an idea: With the new Golden 1 Center about to open, they could catch on in downtown Sacramento, too.

So after retiring from 30 years in construction, he started River City Rickshaw in September 2015. Now, he owns nine pedicabs and is seeking mobile advertising, where he says the real money is.

But he’s pedaling into a potential roadblock at City Hall.

There apparently have been enough close calls between pedicabs and pedestrians that city officials believe there ought to be a law. Under a proposed ordinance approved by the City Council’s Law and Legislation Committee on June 4, pedicabs would be banned from traveling or parking on sidewalks and would be required to make way for pedestrians on any public way, including multi-use trails.

Pedicabs have not received as much attention as shared bikes and electric scooters as Sacramento expands personal transportation choices. And while pedicabs are nowhere near as prevalent here as in more popular tourist destinations, the number with official city permits has risen from just one in 2014 to 26 in 2019. They also tend to concentrate in downtown and Midtown when sidewalks are the most crowded—on weekend nights and before and after concerts and other events.

Most sidewalks in the central city are eight feet wide, and pedicabs are more than four feet wide. So pedestrians can be forced to dodge them, especially when trees, tables and other obstacles are in the way. Officials are particularly concerned about those with disabilities.

Pedicabs weigh about 150 pounds empty so with a driver and two passengers—a couple of average weight—that’s 700 pounds or more of metal and flesh coming down the sidewalk.

Councilman Steve Hansen said there’s no reason for pedicabs to be on sidewalks when they can fit in standard 5-foot-wide bike lanes. But he cautioned that enforcement will be difficult because “we don’t have the staff to chase people around.”

In a letter to the city, pedicab operators said there are only a few “bad actors.” They asked that certain sidewalks be exempted from the ban, including those along light rail lines (K Street between 7th and 12th) and those on marked bike routes (N and L streets between 10th and 15th).

City staffers will review the request before the ordinance goes before the full council, probably in August if there are no significant changes.

Rembulat said with those exemptions, he would be fine with the new rules. He said he pedals in the street 90% of the time and only goes on sidewalks when it’s safer, like when a light-rail train is behind him and he’s carrying small children.

Elizabeth Wong Fontana, who owns Sacramento King Pedicabs, says she hasn’t had any close calls in her two years operating here. She argues that the rules should be based on the particular street, pointing out that K Street—where she does most of her trips between Golden 1 and the Crest Theatre— has long stretches of wide sidewalks, while light-rail trains and Uber and Lyft cars often clog the street.

“Where do they think we should go?” she asked.

There are certainly pluses to pedicabs. They’re another option for short trips. They’re human powered, so don’t add to greenhouse gases. And the drivers can be good ambassadors for Sacramento.

But a serious crash is the last thing the city or pedicab companies want. So now they have to figure out rules that protect pedestrians, but also keep pedicab drivers and passengers safe.

Be the first to comment on "Editor’s note: A roadblock for Sac pedicabs?"