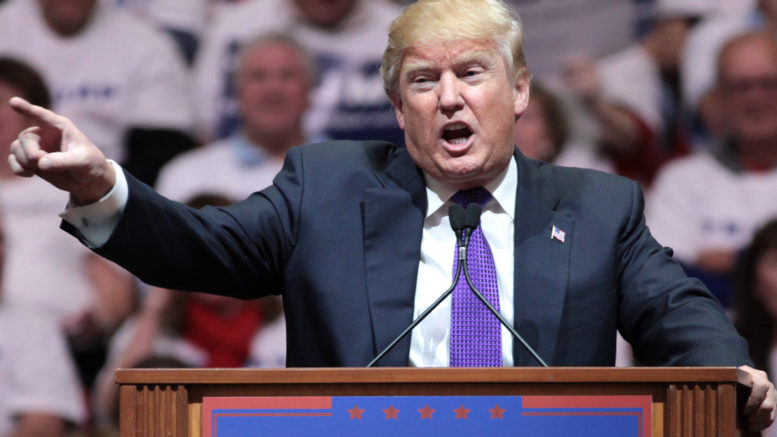 Four years ago, in those horrific days surrounding Donald Trump’s inauguration, I wrote a piece for SN&R urging California to use its political clout to resist Trump’s policies and agenda, and imploring Californians to become the moral beacons of an anti-Trump resistance.

It has been a long four years. And even assuming his presidency is now in its final, rancid days with Joe Biden’s victory, the damage from these years is so immense, so metastasized that it will take decades to repair.

Every so often, in the period following Trump’s chilling “American Carnage” inauguration speech, a commentator or analyst would write something such as, “I thought it would be bad, but this is so much worse than I dreamed possible.”

Alas, I was never under any illusions as to what Trump represented. I am not exactly sure why, but from the time he launched his presidential campaign in mid-2015, I was absolutely certain, in the marrow of my bones, that he represented an existential threat to the political system and the democratic culture of this country.

He wasn’t just a buffoon; he was a skilled demagogue. He wasn’t just a loudmouth; he knew how to channel rage, how to coax it out of audiences, how to gin up chaos and sow division to solidify his power and his ambitions. This was something new in American political leadership, a man capable—and desirous of—unleashing the most irrational, cultist and despotic elements onto the national stage.

In February 2016, as Trump was beginning his assault on politics-as-normal during the first months of the primary season, I drove to Sparks, Nevada, to interview Trump supporters for the Nation magazine. It was weeks after Trump had aired ads calling for a total ban on Muslims entering the United States, and he was touring the country to rile up his rally crowds with ever-more bilious racial and religious bigotries, and using his Twitter account to ever-more pernicious effect.

At that caucus, I asked his supporters their views on Muslims. One after another, they told me that Muslims should be deported and that Islam should be prohibited. Several told me in no uncertain terms that Muslims deserved to be executed.

I left that caucus convinced that, if Trump were to win the GOP’s presidential nomination and were, somehow, to thread the needle and win election, he would take a wrecking ball not just to notions of good governance but to basic ideas of humanity, decency, the rule of law, the idea of looking out for one’s neighbors and the understanding of a common good.

Nothing in the last four years has changed my opinion.

Trump’s policies and practices on immigration, the environment, workers’ rights, racial and gender and sexual equality, on access to health care, on providing assistance to the poor and on a myriad of other issues has been simply one long litany of malignancy. He has normalized corruption and cruelty in governance, and has wielded a chain saw against understandings of truth versus falsehood, waging war against everything from climate science to the holding of an accurate census to the basic notion of counting every vote in an election.

Which brings me back to California. This state, for various reasons, never fell for Trump’s BS. In 2016, only 31% of Californians voted for him; in 2020, with votes still being counted, only 33% are supporting him. In the intervening four years, this multi-ethnic, multi-lingual, culturally diverse state did, indeed, become something of an epicenter of resistance.

We marched—in annual women’s marches, Earth Day marches, marches against the barbaric child separation policy, marches for gay rights, marches for racial justice, marches for criminal justice reform and so on. Our political leadership stood firm against Trump’s demagogic attacks on “Dreamers,” on refugees, asylum seekers and all the other wonderful parts of California’s diverse 40 million people. Leaders of agencies such as the California Air Resources Board refused to bend to Trump’s pressure to curb the ambitions of their clean energy and fuel efficiency regulations. Attorney General Xavier Becerra spearheaded one lawsuit after another after another against the Trump administration to create multi-state coalitions to protect basic rights and longstanding policy goals in the face of a relentless campaign to undermine them.

Not surprisingly, Trump has spent the last four years taking every opportunity to bash California. He flew out to slam the state’s response to homelessness, but his criticism was less about policy and more about the visual stain that visible homeless populations represented in tony neighborhoods. He repeatedly lied about climate change as, year in, year out, California’s wildfire season grew more dangerous—and then he compounded the damage by repeatedly threatening to deny federal funds to respond to these disasters. He attempted to withdraw federal dollars from “sanctuary cities” to get California to force law enforcement agencies to cooperate with his increasingly ruthless anti-immigrant sweeps. He attacked California politicians, such as Oakland Mayor Libby Schaaf, by name. He used California as a foil to whip up anti-immigrant, anti-poor, anti-liberal, anti-environmental fervor amongst his base.

He minimized COVID-19 deaths and at one point made the simply outrageous comment that if only you didn’t count California and other “blue states,” America’s death rate from the disease would plummet. (Of course, now that the epicenter of America’s epidemic is in “red” states, he has stopped pedaling this particular line of nonsense).

There was nothing accidental in any of this. It didn’t matter to Trump how much harm he was doing to the country’s social fabric by pitting one region against another, one group of people against another. Demagogues have, after all, never been worried about the collateral damage that their rhetoric causes. So long as it serves their particular purposes, so long as it furthers their individual ambitions, so long as it gratifies their outsized egos, they will view that damage as being entirely worthwhile. Trump, who is not just a demagogue but also a world-beating narcissist, is, in this regard, particularly virulent.

And so for four years, California, and Californians have been at the wrong end of this morally calcified man’s petulant and thuggish personality. We have watched in horror as he has debased America’s culture and diminished America’s standing in the world. We have shuddered at the cruelties he has unleashed in the name of us, The People. And we have understood the importance of acting as a repository, during these dark years, for America’s moral values. We are not, by any stretch of the imagination, a perfect state. Yet, for all our flaws, California has become in these years, something of a haven for what America can be in its best incarnation. There is a famous stanza, oft-quoted since 2016, in Langston Hughes’ poem Let America Be America Again:

Let America be the dream the dreamers dreamed/

Let it be that strong land of love/

That any man be crushed by one above.

Trump’s assault on democracy has accelerated in recent months. I could write a list pages long of his acts of malfeasance this election season.

From the get-go, Trump has governed not as the leader of a democracy, but as a wannabe-king or a tyrant. He has, quite literally, gotten his attorneys to argue that, by virtue of his position, he is above, and outside of, the law. He was impeached for trying to strong-arm a foreign government to provide dirt on Biden. He has curried favor with despots and demeaned democratically elected prime ministers, presidents and chancellors. He has used his office for personal enrichment, and he has used his vast platform to attack not just political opponents but private citizens.

Trump’s assault on democracy has accelerated in recent months. I could write a list pages long of his acts of malfeasance this election season. A few highlights: He attempted to defund the U.S. Postal Service specifically to derail mail-in voting; he has repeatedly and baselessly cried “fraud;” he floated the idea of canceling the election; he urged his supporters to vote twice; he flirted with para-militarism by telling the fascist Proud Boys to “stand back and stand by.”

Now, in these strange post-election days, he has tried to seize the narrative by claiming victory in the middle of vote counts; has demanded those counts be stopped; has launched numerous lawsuits; and has repeatedly told his supporters, many of them armed, that their votes are being stolen by some nefarious cabal of interstate operatives going from Michigan to Wisconsin to Arizona to Georgia to Pennsylvania to Nevada to god knows where else on a mission to sabotage Donald J. Trump.

None of this is remotely funny. The world’s most powerful man is currently performing the world’s most inelegant, and potentially dangerous, Last Hurrah. None of his actions, none of his rhetoric, are aimed at calming an overheated political moment, or defusing a dangerous political situation. Instead, it is all about chaos, about fear, about fury and rage.

It is now, as it always has been for him, all about Donald Trump.

Sasha Abramsky, a SN&R contributor who teaches at UC Davis, writes a subscription-based column at theabramaskyreport.com and is the author most recently of Little Wonder: The Fabulous Story of Lottie Dod, the World’s First Female Sports Superstar.