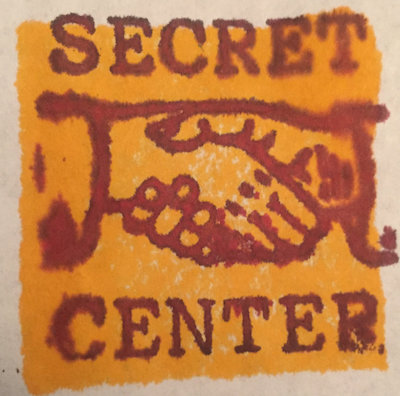 In an hour talking to Jason Dezember and Scott Miller, two of the three founders of Sacramento’s Secret Center Records, the words “funny” and “fun” come up a lot. The small, independent label’s name comes from a barely-remembered inside joke about a gumball machine, and its longest-running band is called The Bananas.

So of course sense of humor is central to the project. “I feel like I really always wanted have some aspect that kind of threw people,” says Miller. “Like are these people idiots, or are they really fun?”

The 30-something year old label went mostly quiet in the late ’90s, but now it puts out new releases regularly, both physically and digital-only, of both new music by the founders’ bands and amassed-but-unreleased Sacramento music.

Secret Center came together in 1990 when childhood friends Miller, Dezember and Ed Carroll decided to release records by their own band, Nar, rather than wait for an established label to come around.

“We were pretty proud of it…because a lot of the bands were just sort of schlepping around playing shows kind of hoping someone would just offer to put something out,” Dezember says. “And we just said, ‘Fuck it, let’s put something out.’”

The three continued playing in bands together, but as Dezember and Carroll moved or devoted time to other projects, Miller took the lead. Secret Center had a fairly steady output of vinyl and cassettes through the mid-’90s, with bands including the founders’ own, plus bands they liked, friends’ bands, and compilations of all of the above.

Discogs may not be your best guide in tracking down or educating yourself about Secret Center. Catalog numbers vary in formatting, and some releases weren’t numbered at all. And around 1996, Secret Center slowed down considerably, eventually petering out as Miller worked on other projects.

“I didn’t really consciously stop Secret Center,” says Miller. “I just kind of wanted something different. I thought that Secret Center was looked on as more of like a punk label and [I] was getting so poppy that I thought I’d do something else.”

That included “Cassingle and Loving It!” a collaborative project that belonged to Miller and, well, pretty much anybody who showed up at his shared house in Midtown, which was the label’s headquarters.

“The rule was anybody could make one….The rule was you had to make like 10 copies of a tape, and you had to drop some off in this bowl which is where you could buy them. They were a quarter.”

The rules also required tapes have a cover; and materials for both the tapes and covers were often repurposed from “real” cassingles, often “rescued” from the Tower Records warehouse where seemingly half of Sacramento worked at some point in the ’90s.

“I think it’s one of the best things [about] local music to me,” Dezember remembers. “I’m so glad it existed. [Instruments were] permanently set up in the front room…There’s drums, and at one point there was a freaking xylophone. I don’t know how, why it got there. So you could just be hanging out at the house and [decide] ‘Let’s make a cassingle band!’ And write a song, record it in the same night, then you’d make covers and drop ’em in the bowl. And there are these cassingles, random bands, a lot of them are just the same people with different band names.”

Even people who weren’t normally musicians were encouraged to participate: “[We’d] be like, “Hey!…why don’t you just write the lyrics and we’ll back you up,” Miller says.

Miller doesn’t have a copy of every “Cassingle and Loving it!” tape: “Sometimes they were numbered and sometimes they weren’t, and no one kept track of the numbers. I could sit down and probably figure out 75% of them, maybe, but not in order.”

Cassingles or no, Secret Center was relatively quiet until 2018, when Bright Ideas (one of Miller’s bands), put out an album, both physically and digitally. “And as much as I don’t like the [digital] format, it was becoming easier to put your own thing and sell it, and we’re not in a band that tours, so people were not necessarily having to sell things physically. So we’re just like “we’ll put it out ourselves…let’s put it out on Secret Center, that’d be funny.”

Soon after, when The Plastic Shoelaces—a band with three of the four members being Secret Center founders—released songs both on cassette and Bandcamp, it only made sense (and maybe still a little funny, too) to get the band back together on the label they started as teenagers.

With Secret Center revived and Dezember building Bandcamp pages not just for their new bands but for the label, new possibilities seemed to arise. “Bandcamp just kinda nailed it,” says Dezember, whose own Ashenden Papers records are available on the label.

Miller says Bandcamp’s model bridges that digital-physical gap: “I go on there, there’s some record I want, I don’t care where, maybe it’s in England, and… I’m like, shit, I don’t care, I really want this record. I’ll pay the postage, it’ll take a month and I’m gonna buy it.” he says. At the same time, “I’m also gonna have it digital, right now, on the Bandcamp app.”

Most of Secret Center’s contemporary releases will be available both physically and digitally, but older music—unreleased bands and bits from the Secret Center archives—is less likely to get a tangible release.

Friday is the digital-only release of an EP by the Angora Debs—a band that existed briefly around 2012. The trio was made up of Sacramento-to-Bay (and back) Jason Patrone, Marie Davenport and Mike Thiemann, and the EP will definitely appeal to fans of Patrone’s FM Knives. It can be purchased only through Bandcamp—but for a label that’s released music on nearly every imaginable format over the last 30 years, that feel about right.

The Golden State Killer is about to vanish again—behind bars

Essay: Moment of truth on climate

Be the first to comment on "Shape-shifting Secret Center"